Crowd angered by lockdowns calls for China's Xi to step down 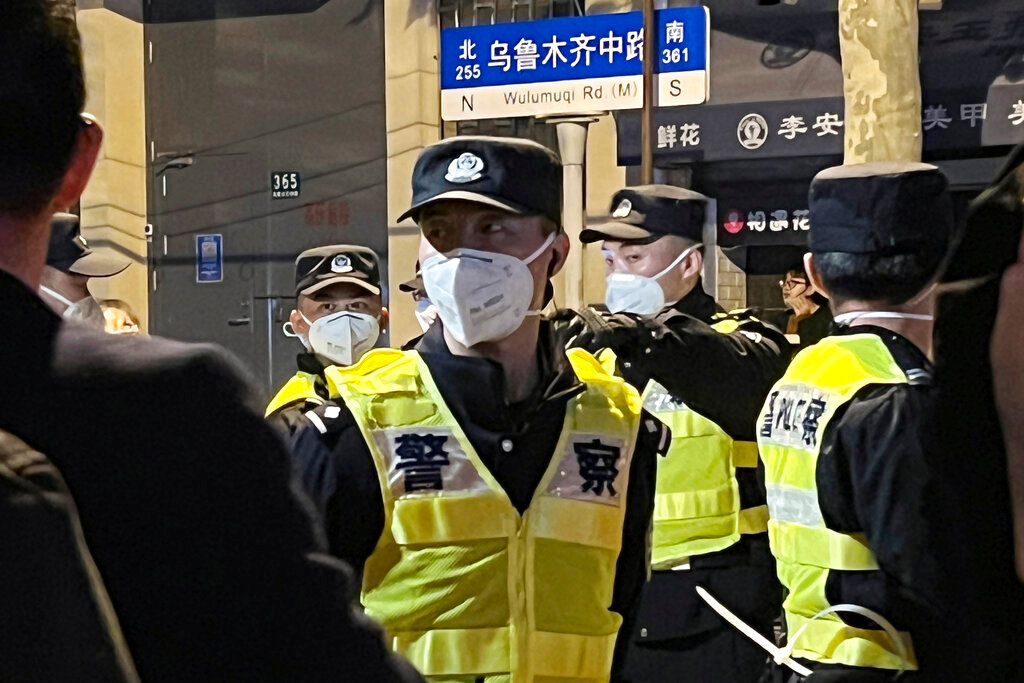 Chinese police officers block off access to a site where protesters had gathered in Shanghai on Sunday, Nov. 27, 2022. Protests against China's strict "zero-COVID" policies resurfaced in Shanghai and Beijing on Sunday afternoon, continuing a round of demonstrations that have spread across the country since a deadly apartment fire in the northwestern city of Urumqi led to questions over such rigid anti-virus measures. (AP Photo)
Posted Sunday, November 27, 2022 12:28 pm
By DAKE KANG and HUIZHONG WU, Associated Press

Police using pepper spray drove away demonstrators in Shanghai who called for Xi Jinping to step down and an end to one-party rule, but hours later people rallied again in the same spot. Police again broke up the demonstration, and a reporter saw protesters under arrest being driven away in a bus.

The protests — which began Friday and have spread to cities including the capital, Beijing, and dozens of university campuses — are the most widespread show of opposition to the ruling party in decades.

In a video of the protest in Shanghai verified by The Associated Press, chants sounded loud and clear: “Xi Jinping! Step down! CCP! Step down!”

Xi, the most powerful leader since at least the 1980s, awarded himself a third five-year term in October as leader of the ruling party. Some expect him to try to stay in power for life.

Three years after the virus emerged, China is the only major country still trying to stop transmission of COVID-19. Its “zero COVID” strategy has suspended access to neighborhoods for weeks at a time. Some cities carry out daily virus tests on millions of residents.

That has kept China's infection numbers lower than those the United States and other major countries, but public acceptance has worn thin. People who are quarantined at home in some areas say they lack food and medicine. The ruling party faced public anger following the deaths of two children whose parents said anti-virus controls hampered efforts to get medical help.

Protests erupted after a fire broke out Thursday and killed at least 10 people in an apartment building in the city of Urumqi in the northwest, where some have been locked in their homes for four months. That prompted an outpouring of angry questions online about whether firefighters or people trying to escape were blocked by locked doors or other anti-virus restrictions.

About 300 demonstrators gathered late Saturday in Shanghai, most of whose 25 million people were confined to their homes for almost two months starting in late March.

On a street named for Urumqi, one group of protesters brought candles, flowers and signs honoring those who died in the blaze. Another, according to a protester who insisted on anonymity, was more active, shouting slogans and singing the national anthem.

The protester and another, who gave only his family name, Zhao, confirmed the chants against Xi. Like others who spoke to the AP about the protests, they didn't want to be identified due to fear of arrest or retaliation.

The atmosphere of the protest encouraged people to speak about topics considered taboo, including the 1989 crackdown on the Tiananmen Square pro-democracy protests, the unnamed protester said.

Some called for an official apology for the deaths in the fire in Urumqi in the Xinjiang region. One member of Xinjiang's Uyghur ethnic group, which has been the target of a security crackdown that includes mass detentions, shared his experiences of discrimination and police violence.

“Everyone thinks that Chinese people are afraid to come out and protest, that they don’t have any courage,” said the protester, who said it was his first time demonstrating. “Actually in my heart, I also thought this way. But then when I went there, I found that the environment was such that everyone was very brave.”

The scene turned violent early Sunday. Hundreds of police broke up the more active group before they came for the second as they tried to move people off the main street. The protester said that he saw people being taken away, forced by police into vans, but could not identify them.

Zhao said one of his friends was beaten by police and two were pepper-sprayed. He lost his shoes and left barefoot.

He said protesters yelled slogans, including one that has become a rallying cry: “(We) do not want PCR (tests), but want freedom.”

On Sunday afternoon, crowds returned to the same spot and again railed against PCR tests. People stood and filmed as police shoved people.

Officers in surgical masks and yellow safety vests told the crowd of about 300 spectators to leave but appeared to be trying to avoid a confrontation. There was no sign of shields or other riot gear.

In Beijing, a group of about 200 people gathered in a park on the capital’s east side and held up blank sheets of paper, a symbol of defiance against the ruling party’s pervasive censorship.

“The lockdown policy is so strict,” said a protestor, who would give only his surname, Li. “You cannot compare it to any other country. We have to find a way out.”

Postings on social media said there were also demonstrations at 50 universities.

About 2,000 students at Xi’s alma mater, Tsinghua University in Beijing, gathered to demand an easing of anti-virus controls, according to social media posts. Students shouted “freedom of speech!” and sang the Internationale, the socialist anthem.

The protesters left after the university’s deputy Communist Party secretary promised to hold a school-wide discussion.

Videos on social media that said they were filmed in Nanjing in the east, Guangzhou in the south and at least six other cities showed protesters tussling with police in white protective suits or dismantling barricades used to seal off neighborhoods. The Associated Press could not verify that all those protests took place or where.

“The tragedy of the Urumqi fire has inspired remarkable bravery across China,” the group’s regional director, Hanna Young, said in a statement. “These unprecedented protests show that people are at the end of their tolerance for excessive COVID-19 restrictions.”

Urumqi and a smaller city in Xinjiang, Korla, eased some anti-virus controls in what appeared to be an attempt to mollify the public following Friday's protests.

Markets and other businesses will reopen in areas deemed at low risk of virus transmission and bus, train and airline service will resume, state media reported. They gave no indication whether residents in higher-risk areas would be allowed out of their homes.