Deep in the heart of Appalachia

Mac Stricklin, director of the Big A Club at First Baptist Church in Hampton, TN, directs children on a recent afternoon. GEORGIA WMU/Special

HAMPTON, TN — There are vast areas of the Appalachian Region that are poverty stricken. The mountains of Tennessee, Kentucky, West Virginia, Virginia, and Alabama are home to hardworking individuals who value their families, community, and living in the beauty of one of America’s most magnificent regions.

According to a website called Community Commons the region’s primary industry – coal – provided a living for a large segment of people in Appalachia for generations. In its heyday of the 1910s and 20s, more than 700,000 jobs were provided by the coal industry. In Appalachia that number now hovers at around 44,000 – with relatively no new industries coming in to fill the void.

With the demise of the coal industry that began in the 1940s, unemployment and poverty hit the region hard. Poverty in Appalachia is a major problem, but a problem that goes largely unnoticed by the rest of the country.

With the help of Bill Barker, director of Appalachian Regional Ministries of the North American Mission Board, Georgia Baptists have identified some specific needs in Appalachia and are responding to those needs.

Since 2012 Georgia Baptists have been the primary providers of backpacks for Appalachia, sending tens of thousands of backpacks resulting in hundreds of students trusting Christ as Savior. 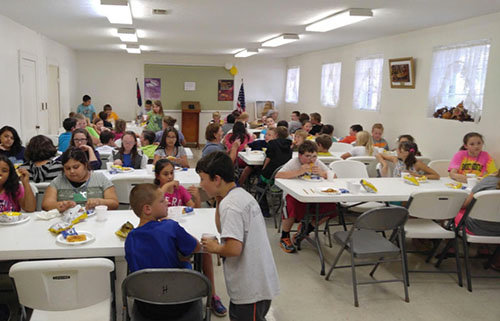 Many of the chidlren who attend the Big A Club come from families that struggle to provide food and basic toiletries, says one club volunteer. GEORGIA WMU/Special

In September 2016 Beverly Skinner, Georgia Baptist missionary with the Woman’s Missionary Union and Women’s Ministry, state missionary Frank Nuckolls, and a small group of Georgia Baptist women went on a vision trip with Barker through the Appalachian region of east Tennessee. Included in the trip was a visit to First Baptist Church in Hampton, TN.

Skinner reported, “We learned about the church’s ministry to the children of their community through the 'Big A Club.' Hampton’s ‘Big A Club’ is an afterschool children’s Bible ministry held each Thursday during the school year at Hampton First Baptist Church.”

Becky Brumitt gives leadership to the “Big A Club” in Hampton. Nuckolls stated, “Becky served as a missionary in the Appalachian region of east Tennessee for many years. For most of those years she served as the director of Hale Community Ministries for the Watauga Baptist Association in Elizabethton, TN. After her retirement from that position, she has focused her ministry to reach boys and girls through the 'Big A' Club in Hampton.”

According to Brumitt, “The Big A Club targets children in grades 3 through 6. The name ‘Big A’ comes from the club’s motto: ‘You must love the Lord your God with all your heart, with all your soul, and with all you mind” (Matthew 22:37).

Brumitt continued, “This year over 60 students enrolled and attended Hampton’s Big A Club. The students arrive at the church by school bus. They are provided a meal and led through pledges to the American flag, the Christian flag, and the Bible. They then rotate through Bible story time, recreation, crafts, and music. Parents pick-up their children at the end of the ‘Big A Club’ meeting.”

“Many of the ‘Big A’ children,” declares Brumitt, “come from families that struggle to provide food and basic toiletries for their children. Although a larger percentage of the families are receiving food stamps, this assistance cannot be used for personal hygiene items.

“Due to the large percentage of students eligible for free or reduced breakfast and lunch in Carter County schools, last year the County School Board voted to provide free and reduced meals to all students in the school system – an indication of the poverty in the area.”

Hampton First Baptist has a Sunday School attendance of 40-45 each week and an annual budget of less than $85,000. Providing for the needs of the Big A children is a challenge. Therefore, the church desires and needs partnerships with churches and individuals willing to help meet the material and spiritual needs of the area.

Recently the “Big A Club” had its last meeting for the school year with 51 children present. The pastor of the Hampton church gave a special evangelistic message and 16 of the kids made professions of faith.

Convinced of the need to respond to the challenges Brumitt is facing in her ministry, the Mission Action Committee of the Georgia Baptist WMU Executive Board voted last October to support the work of First Baptist Church in Hampton by encouraging Baptist women to provide crafts for the Big A Club. Skinner explained, “I think it’s important to note that our work with them has been at the directive of our Executive Board.”

There are 25 Georgia Baptist churches currently involved in this ministry in some way and the list of participating churches continues to grow.

Skinner remarked, “Kiokee Baptist Church in Appling is planning to take a mission group to Hampton for the first Big A Club meeting in September 2017. In addition to craft supplies, they are providing needed hygiene items for all of the children."