While pastors hold a view that diversity in churches must be worked toward, that perspective isn't matched by those in the pews, according to a recent LifeWay Research study. GETTY IMAGES
Posted Thursday, March 22, 2018 9:56 am
Baptist Press

While pastors hold a view that diversity in churches must be worked toward, that perspective isn't matched by those in the pews, according to a recent LifeWay Research study. GETTY IMAGES

NASHVILLE (BP) — Protestant churches may be a little more diverse these days. And that's a good thing, their pastors say in a new study released March 20.

Eighty-one percent of Protestant pastors say their congregation is predominantly made up of one racial or ethnic group. That's down from 86 percent four years ago, according to the study conducted this past Aug. 30-Sept. 18 by LifeWay Research.

It's a small but significant step, said Scott McConnell, executive director of LifeWay Research, in a nation where Sunday mornings often remain segregated.

"Protestant churches are still mostly divided by race," McConnell said. "But they're heading in the right direction."

Lifeway Research surveyed 1,000 Protestant pastors last fall about racial diversity in their congregations – and then compared the results to a similar survey in 2013.

In the most recent survey, 93 percent of pastors – including 80 percent who strongly agree – say every church should strive to achieve racial diversity. Four percent disagree. Three percent are not sure. 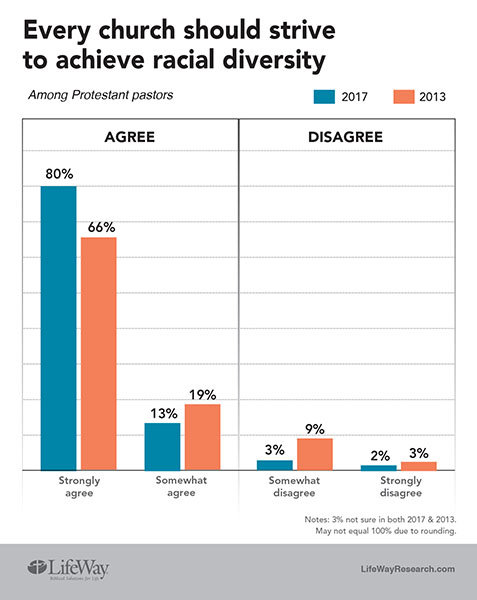 Four years earlier, 85 percent of pastors agreed churches should strive for diversity. That included 66 percent who strongly agreed, while 12 percent disagreed and 3 percent weren't sure.

When it comes to congregation diversity, 81 percent of pastors in the latest survey say their church mostly consists of one racial group. Sixteen percent disagree. Three percent are not sure.

Pastors of larger churches – those with 250 or more attenders – were least likely (74 percent) to say their church is made up mostly of one ethnicity. That jumps to 81 percent for churches with 249 or fewer attenders.

Based on denominational affiliation, Lutheran pastors (89 percent) are most likely to say their church is made up of predominantly one ethnic group. Baptist (81 percent), Presbyterian/Reformed (77 percent) and Pentecostal pastors (68 percent) are less likely.

Not afraid to talk about race

Pastors are likely working on reconciliation in their personal lives, McConnell said. He pointed to a 2016 LifeWay Research survey, which showed most Protestant pastors (57 percent) spent time socializing with neighbors of other ethnicities. More than 7 in 10 (72 percent) had a meal in the previous month with someone of another ethnicity. 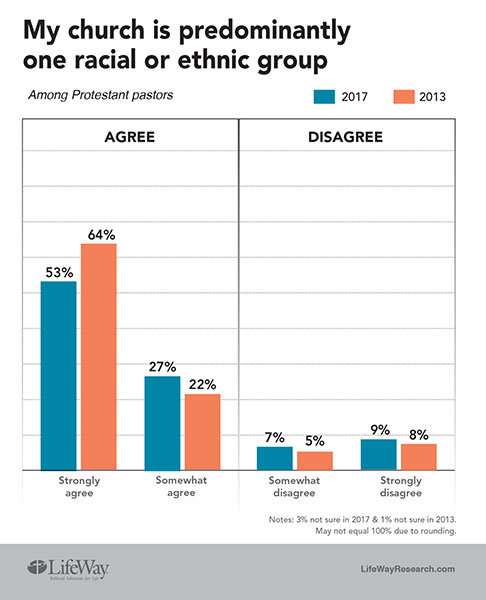 But McConnell said it's not clear that people in the pew will embrace racial reconciliation.

A 2014 LifeWay Research study found two-thirds of American churchgoers felt their church had done enough to become diverse. And fewer than half (40 percent) said their church needed to become more diverse.

More than half of churchgoers disagreed when asked if their church needed to become more ethnically diverse. That included a third who strongly disagreed.

The question of diversity will likely become more pressing for churches in the future, McConnell said. About half of the children under 10 in the United States are ethnic minorities, according to the U.S. Census Bureau.

"Pastors want their congregations to be more diverse – because their communities are more diverse," McConnell said. "But people in the pews aren't there yet. There are hard cultural divides to overcome."

LifeWay Research is a Nashville-based, evangelical research firm that specializes in surveys about faith in culture and matters that affect churches.