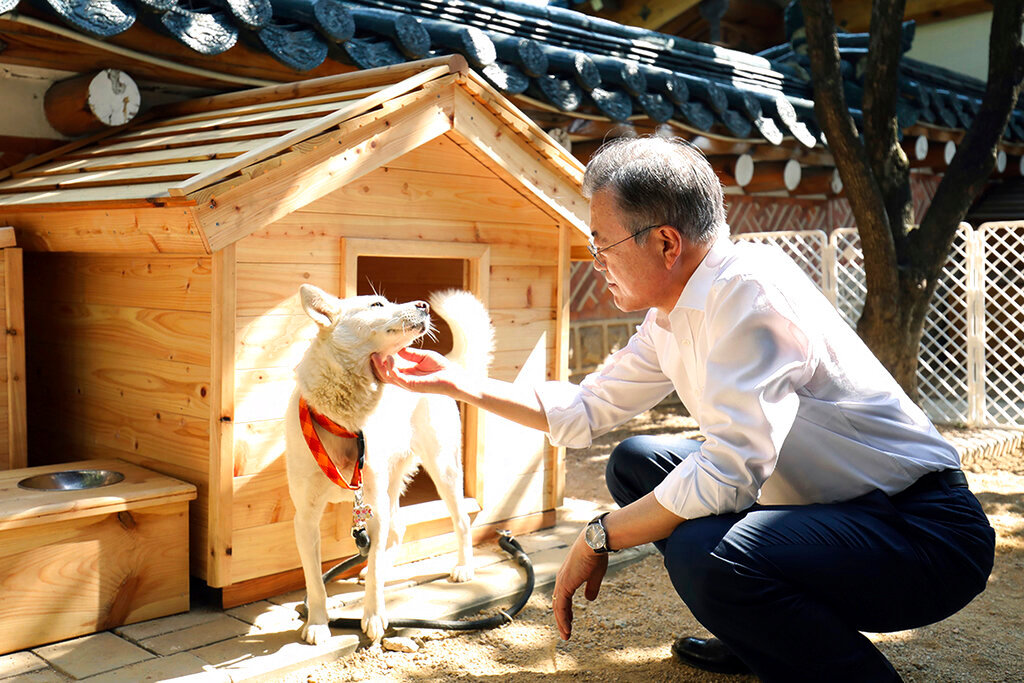 SEOUL, South Korea (AP) — A pair of dogs gifted by North Korean leader Kim Jong Un in 2018 are now mired in a South Korean political row, with the country’s former president blaming his conservative successor for a lack of financial support as he gave the animals up.

Moon Jae-in, a liberal who left office in May, received the two white “Pungsan” hunting dogs – a breed known to be indigenous to North Korea – from Kim following their peace summit in the North Korean capital of Pyongyang in September 2018.

The dogs are officially considered state property, but Moon took the pair and one of their seven offspring home after he left office. The move was made possible by a change of law in March that allowed presidential gifts to be managed outside of the Presidential Archives if they were animals or plants.

But Moon’s office on Monday said he decided he could no longer raise the three dogs because the current government of President Yoon Suk Yeol was refusing to cover the costs for the animals’ food and veterinary care. The Ministry of the Interior and Safety said that the dogs were returned to the government on Tuesday and that the parent dogs originally sent from Kim were being examined at a veterinary hospital in the city of Daegu.

In its statement released on Facebook, Moon’s office accused Yoon’s office of “inexplicably” blocking the ministry’s proposal to provide government funds for the animal’s care.

The ministry confirmed it had drafted a budget plan to provide a monthly $1,810 in subsidies, including $360 for the dogs' food and veterinary care and $1,450 for hiring workers to look after them. But the ministry said the plans were put on hold for months because of unspecified “opposing opinions” from within the ministry and the Ministry of Government Legislation.

“It seems that the presidential office, unlike the Presidential Archives and the Interior and Safety Ministry, has a negative view about entrusting the care of the Pungsan dogs to former President Moon,” Moon's office said.

If that's the case, Yoon's government should be “cool” about ending that entrustment, Moon’s office said.

“There would be disappointment and regrets as they were companion animals (Moon) grew attached to, but there would be no way to reject the termination of entrustment," it said.

Yoon’s office shifted the blame to Moon, saying it never prevented him from keeping the animals and that the discussions about providing financial support were still ongoing.

“It was entirely the decision of former President Moon Jae-in to return the Pungsan dogs to the Presidential Archives” instead of waiting out a legislative amendment to secure the subsidies, Yoon’s office said.

Moon and Yoon’s spat over the dogs sparked criticism online, with users lamenting that the animals were being treated only as properties.