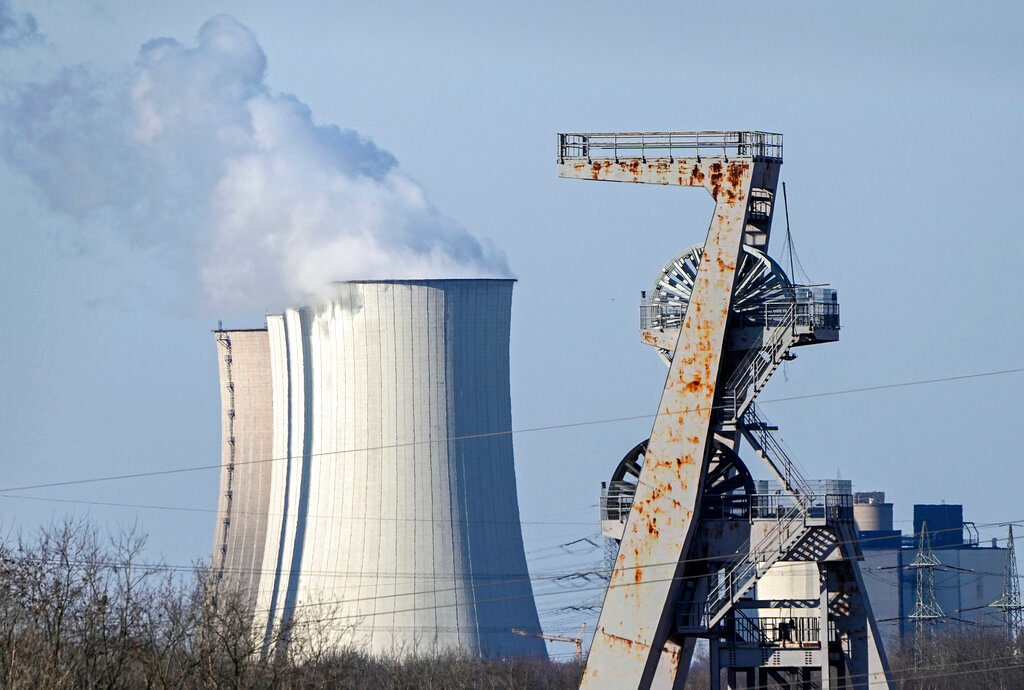 A winding tower of a closed coal mine rusts in front of a coal-fired power station Gelsenkirchen, Germany, Tuesday, March 8, 2022. Compared to the U.S., the 27-member European Union faces much stronger direct economic consequences than does the U.S. from Russia’s invasion of Ukraine and the resulting sanctions _ and that’s true above all when it comes to the oil and gas that fuels vehicles and keeps the heat and the lights on. (AP Photo/Martin Meissner, File)
Martin Meissner
Posted Wednesday, March 9, 2022 12:46 pm
By RAF CASERT, KELVIN CHAN and DANICA KIRKA, Associated Press

BRUSSELS (AP) — Europe faces a tough choice: Is it worth a recession to choke off oil and gas money to Russia while it fights a war in Ukraine?

The 27-member European Union faces far more economic pain from the war and resulting sanctions than the U.S. — true above all when it comes to the oil and gas that powers vehicles and keeps the heat and lights on.

While U.S. and British bans on Russian oil increase the pressure on Europe to follow suit, the continent's dependence on Russia for energy makes an immediate embargo much more difficult. Still, some officials say it is the only way to stop pouring billions in oil and gas revenue into President Vladimir Putin's coffers, despite the near certainty of record inflation worsening.

Europe gets around 40% of its natural gas and 25% of its oil from Russia, whereas the U.S. gets meager amounts of oil and no natural gas. An EU boycott would mean higher prices at the pump and on utility bills, and ultimately the threat of an energy crisis and recession while the economy is still recovering from the coronavirus pandemic.

Prices for everything from food to electricity are already painfully high partly because of skyrocketing natural gas prices in Europe. Governments have rolled out subsidies to compensate people for high utility bills, while gasoline has risen above 2.01 euros per liter — the equivalent of $8.33 per gallon, meaning filling up a compact car could cost 90 euros ($98).

Those costs already are cutting into consumer spending, with inflation at all-time high of 5.8%. The question is: How much more pain can Europeans take to try to stop Putin's attack on Ukraine?

“The consequences to the European economy would be major,” said Simone Tagliapietra, an energy policy expert at the Bruegel think tank in Brussels. “And therefore, there would need to be an upfront, clear, political decision that we are willing to compromise our economy, we are willing to afford a recession, in order to hit Putin where it hurts.”

U.S. President Joe Biden acknowledged as much when he announced the U.S. ban on Russian oil imports, saying “many of our European allies and partners will not be able to join us.”

Efforts to agree on a boycott could be complicated because some EU member countries are much more dependent than others on Russia. Germany and Italy rely heavily on Russian natural gas. Poland gets 67% of its oil from Russia, while Ireland gets only 5%.

“It will be divisive within Europe because one part of Europe risks suffering more,” said David Elmes, head of the Global Energy Research Group at the University of Warwick’s business school. “So it’s going to put the European political system and the European agreements and the European project ... under an awful lot of stress.”

The European Commission, the EU's executive arm, announced a plan Tuesday to wean the bloc off two-thirds of Russian natural gas by the end of the year, including by purchasing more liquefied natural gas brought by ship and building up renewables more quickly.

That already will be a massive challenge to accomplish, Netherlands Prime Minister Mark Rutte said, because “we are very much dependent, that’s the sad reality.”

The EU goal “is a huge task to get there. I’m not sure we can get that, but we have to do everything in our power to make that happen,” he said Wednesday.

With the world already facing an energy crunch and oil prices soaring to $120 per barrel — compared with $76 at the end of last year — a European boycott would send prices and inflation “to the moon,” said Tagliapietra from the Bruegel think tank. And not just for Europe, but energy-consuming countries around the world.

“The price effect is what needs to be considered here, because that is what could drag the global economy into recession,” he said.

Yet the intensification of the conflict, the stream of refugees and the heart-rending images of suffering are keeping the issue very much on the table.

There is “considerable pressure both from allies as well as domestically — the public would probably back this sort of a move as long as it didn’t meant too high prices,” Caroline Bain, chief commodities economist at Capital Economics said in an online briefing Tuesday.

Bain expected European countries to take a “more measured approach” rather than a complete ban on Russian energy and “look at ways in which they can reduce considerably their reliance on Russian energy.”

European refineries that turn crude into gasoline are set up for denser Russian oil and would face challenges switching to other kinds of oil. Russia supplies 14% of Europe's diesel fuel used for trucks and many cars, according to analysts at S&P Global Platts, meaning disruption would “significantly tighten the market."

Europe has made it through most of the heating season, but would face a severe challenge in refilling its natural gas reserves in time for next winter.

The continent could replace all but 10% to 15% of Russian gas, requiring forced rationing that would hit industrial users first, energy analysts at Bruegel say.

Despite the potential fallout, debate on a ban is ongoing. Germany’s economy minister, Robert Habeck, defended on Tuesday the decision to exempt Russian energy from sanctions and noted that U.S. officials said they would “neither demand nor ask” Europe's largest economy to join an oil embargo.

But some German lawmakers support it.

Boycotting Russian energy would be “a hard decision, but a possible and therefore necessary one" that would “hit the decisive lifeline of the Putin regime,” said Norbert Roettgen, a member of the German parliament’s foreign relations committee for the opposition Christian Democrat conservatives.

Dominik Tarczynski, a member of the European parliament for the populist Law and Justice Party of Poland, put it this way: “The ban on Netflix is a joke, because people are dying, so we need a ban on Russian oil and gas now.”