Mike Griffin, lobbyist for the Georgia Baptist Mission Board, speaks to the Executive Committee on March 15. Griffin was affirmed for the attacks he has encountered while working for passage of the religious freedom legislation. JOE WESTBURY/Index
Posted Wednesday, March 16, 2016 7:12 pm
Joe Westbury

The Georgia Baptist Mission Board’s Executive Committee has expressed strong support for lobbyist Mike Griffin in the wake of comments on religious liberty that were taken out of context by state legislators.

The moment included a laying on of hands, a standing ovation after his report, and the passing of a resolution commending him for his stand. The event came on the heals of heated debate at the state capitol following remarks in his regular “Under the Dome” column published March 4 in The Christian Index. 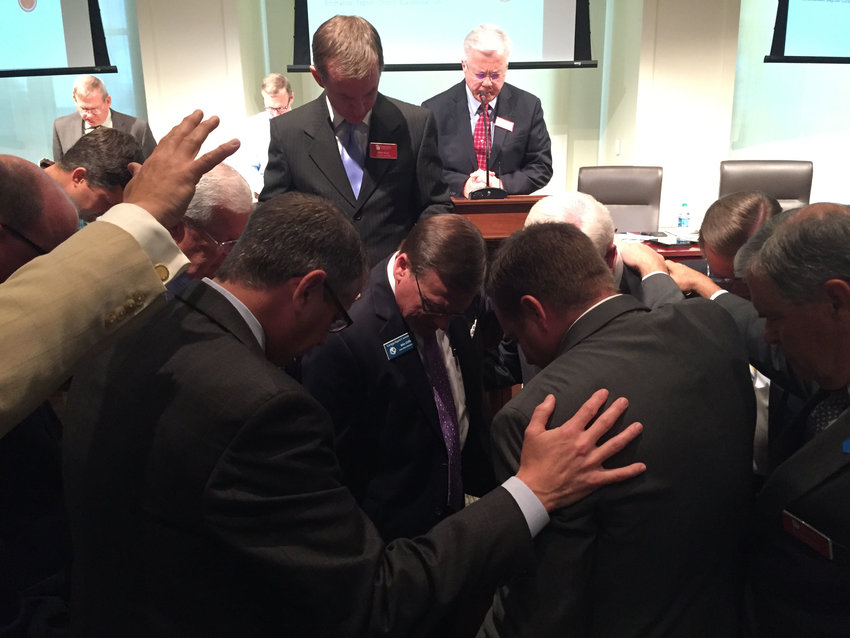 Members of the Executive Committee lay hands on Griffin, center, in an impromptu emotional ceremony. Wayne Robertson of Morningside Baptist Church in Valdosta, at the lectern, led in prayer for Griffin's ministry in promoting religious liberty legislation. JOE WESTBURY/Index

The article, titled “Georgia Religious Freedom Being ‘Held in the Balance,’” appeared as an open letter to pastors. The Public Affairs Representative used the column to issue a call, consistent with the resolution of the state convention, for churches to engage in the political process on the matter of religious liberty.

Comments warned of the dangers of churches remaining silent 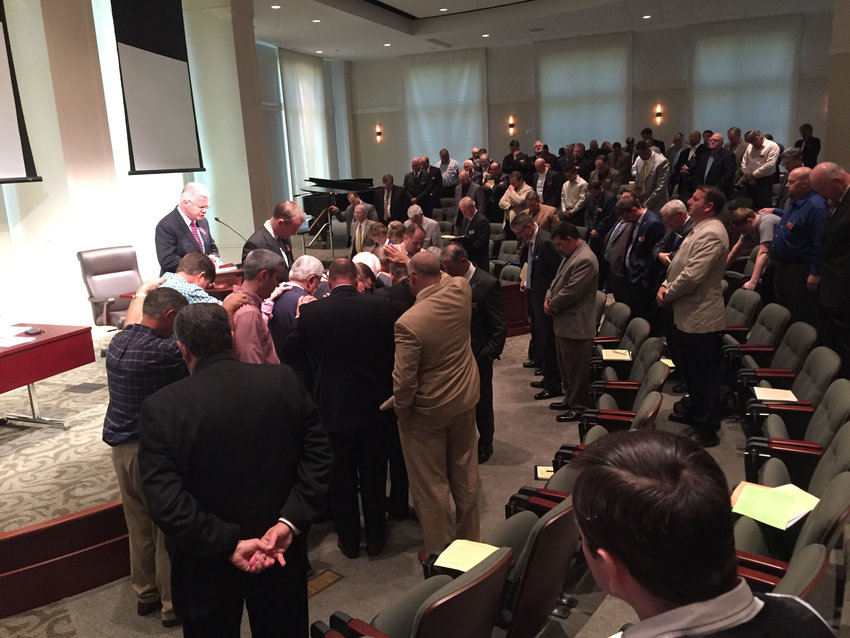 Members of the Executive Committee stand while others surround Griffin in prayer. JOE WESTBURY/Index

Griffin referenced German history as giving perspective to the issue at to what occurs when churches remain silent.

The resolution recounted that on March 10, “members of the House of Representatives, including several Georgia Baptists, mischaracterized Mike Griffin and his March 4 Index article and rebuked him for the well of the House of Representatives of the Georgia General Assembly, leading to significant criticism of him in social media, on WSB-TV, and in multiple articles in The Atlanta Journal-Constitution and Baptist News Global (a CBF-funded news service) …”

The Executive Committee then affirmed its “unwavering support for the work of Pastor Mike Griffin as our Public Affiars Representative and of our Executive Director, Dr. J. Robert White, for his capable oversight of our public affairs office.”

It also affirmed Index Editor J. Gerald Harris for the initial publication of the column and his subsequent editorial, “published on March 11, entitled ‘What’s in the Well Comes Up in the Bucket,’ in which he offered a bold defense of Mike Griffin in the face of these criticisms.”

The resolution then reaffirmed “the call of our state convention that all Georgia Baptists, duly reminded in this matter of the historical danger of silence from the faith community, urge the state legislature to pass meaningful and comprehensive religious liberty protections.”

It then closed by expressing a commitment “to fulfill the biblical mandate of 1 Timothy 2:1-4 in praying for God’s diving wisdom for Governor Nathan Deal, Lt. Gov. Casey Cagle, House Speaker David Ralston, the membership of the Georgia General Assembly, and the leadership of the Georgia Baptist Mission Board.”

The original Under the Dome column, which remains on The Index website, is now preceeded by a detailed explanation of the historical background of Griffin’s comments.