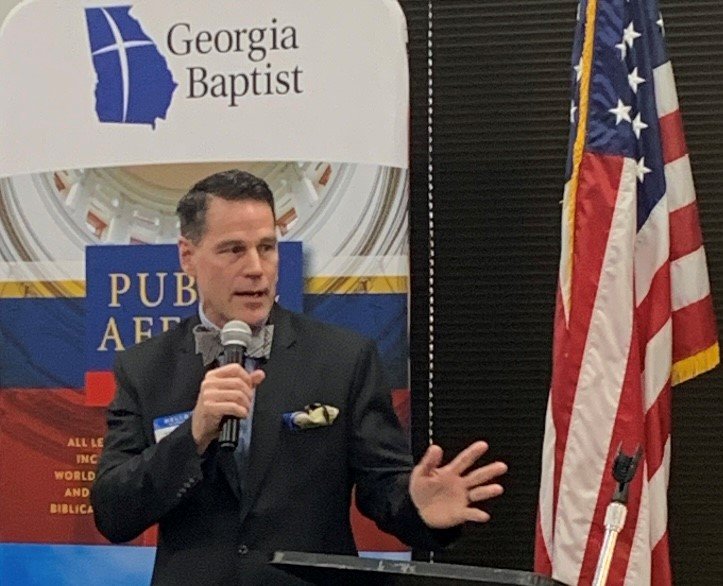 ATLANTA – The hope of America is in the hands of her pastors, says a former U.S. Army Ranger who rose to fame in the aftermath of the Battle of Mogadishu, an intense 18-hour firefight in Somalia that was chronicled in the book and movie Black Hawk Down.

When he was 18, Struecker, a member of the Ranger Hall of Fame, enlisted in the Army as an infantryman. He finished his service 22 years later as a chaplain. The heavily decorated soldier participated in the invasion of Panama, Operation Desert Storm, and the Battle of Mogadishu. He completed more than a dozen combat tours in Afghanistan and Iraq.

Struecker, now pastor of 2 Cities Church in Columbus, Ga., told the crowd about a return trip he made to Mogadishu 20 years after the 1993 battle.

“What I saw really broke my heart,” he said. “I had high hopes for Somalia. I had hopes that after all the American blood that had been spilled there, that the people of Somalia would have a chance for what we have in the United States, that they would have the opportunity for freedom, because a lot of great men gave their lives for that country.”

Instead, Struecker said he saw a country that was worse off two decades later.

“What I learned returning to Mogadishu a second time is that an ungodly people are an ungovernable people,” he said. “You give men weapons, and you give them the ability to wage war, if there’s nothing inside their heart holding them back, they will kill, destroy and take whatever they want.”

Struecker said he sensed his call to ministry after the Battle of Mogadishu.

“Because I had this rock solid Christian faith, in the middle of this 18-hour firefight, when everyone around us was absolutely convinced we’re all going to die tonight, that there’s no way we’re going to survive, in the middle of this God gave me supernatural peace,” he said. “When I came back from the battle the very next morning, no exaggeration, guys were … waiting to talk to me and were asking me questions about my faith. And they were saying, ‘Jeff, I saw something in you on those city streets last night. I was listening to your voice on the radio, and when everyone else was totally terrified, you were calm, and I don’t even understand how that’s possible. I don’t know what you have, Jeff, but whatever it is, I want it.’ And I spent the next day telling my buddies about my faith and how Jesus Christ can radically change their life.”

In those moments, Struecker said God made clear to him that he was to go into ministry.

“Now, I stand in front of you, and I’m telling you I have great concern for our country. I’m not going to get political. My concern is not for who President Biden is going to pick for the Supreme Court. That worries me. My concern is not about the direction of our country and the polarization of the two political parties and how the news is weaponizing the Democratic and Republican parties against the American people to divide us right down the middle. That worries me. What really concerns me is America is becoming a post-Christian, atheistic, humanistic country, and I can tell you exactly what that looks like. You take it to the full extreme on that scale, and it looks like Mogadishu, Somalia 20 years later … because an ungodly people are an ungovernable people”

Struecker described himself as a very patriotic person who takes his politics very seriously. “But,” he said, “my hope is not in our government; my hope is in the gospel.”

The Bible makes clear, Struecker said, that the life-changing power of the gospel is what’s necessary to be able to live in a good country, amid good people.

“This is what Jesus said in Luke 6:45: ‘A good people produce good fruit out of the goodness of their heart.’ And then just to make sure his audience doesn’t miss it, He says ‘an evil people will produce evil fruit because it comes out of an evil heart.’ What Jesus is really saying is if you want to live around good people, if you want to live in a good country, it’s going to take good hearts and we all know that can’t be done by the Supreme Court. The president of the United States, the Georgia state senate and Congress will not be able to pull that one off. That’s going to come form your churches. That’s going to come from the gospel of Jesus Christ.

“In the words of John Adams, our second president: ‘When the pulpits thunder, then there’s hope for our country. So, my challenge to you, as one of you, as a former member of the U.S. military, and now serving the greatest army ever assembled on planet earth, the army of King Jesus, my challenge to you pastor is to thunder the gospel of the Lord Jesus Christ form your pulpits because a good people are a governable people, an ungodly people is an ungovernable people, and an ungovernable people will descend into chaos here in our country like it will anywhere else.”