WOODSTOCK (BP) — Fathers must train their children to use technology wisely, Brian Jennings told men in a breakout session at the Johnny Hunt Men's Conference.

Jennings, middle school pastor at First Baptist Church in Woodstock, led a session on "Digital Discipleship," addressing the explosion of technology use; its consequences in the lives of kids and teenagers; and strategies that fathers can use to keep their families safe. 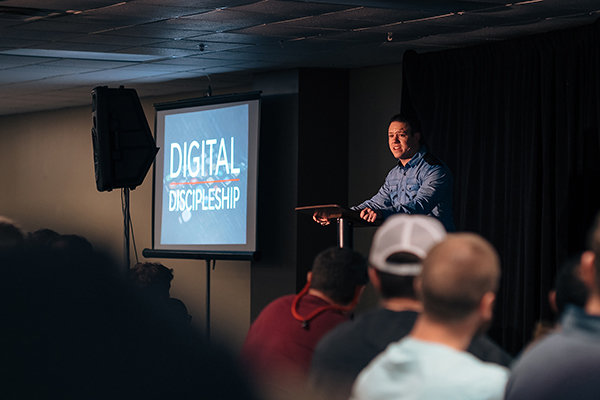 Mental health issues are among the consequences of today widespread technology, Jennings said. In the five years between 2010 and 2015, the number of U.S. teens who felt joyless and useless jumped 33 percent, he recounted. At the same time, the number of suicides among those ages 13-18 jumped 31 percent.

Those figures correlate to statistics showing that in 2010, smartphone use among teenagers passed 50 percent for the first time, Jennings said. By 2015, the number was almost 75 percent.

"Researchers have now begun to notice that smartphone use is having real detrimental effects on the next generation," he said.

Accompanying the increased technology usage among kids and teenagers is increasing consumption of pornography, Jennings stated, referencing research from Barna indicating that 93 percent of boys and 62 percent of girls are exposed to internet pornography during adolescence, and of the pornography consumed by those under age 18, 22 percent of it is consumed by children under age 10.

"The question has shifted from 'if' to 'when,'" Jennings said. "It has become ubiquitous among the next generation to view pornography."

In such a changing technological landscape, Jennings said it's vital for fathers to play a leading role in protecting their families from pornography and other detriments that accompany widespread technology use.

The answer, Jennings said, is not to try to completely shelter kids from technology. Even if parents take devices away from their kids, the kids often will use devices belonging to friends or family members.

Instead, Jennings called for fathers to exercise wisdom in training both themselves and their families for godliness.

While he said some fathers might be intimidated in doing that, they should look to the Bible as a resource, as the Bible is not afraid of those kinds of subjects.

Jennings said men also must establish good habits in their families such as faithfulness to church, regular time of Bible reading and prayer, serving the church, non-screen activities, and reading. And fathers must set limits on how their kids use technology.

"You as the parent have the ability to limit the location and the amount of technology in the home, because you're the one paying for it," he said.

Jennings said the next component in dealing with technology is protection. He provided a number of tools that parents can use (such as Circle, Mobicip, Covenant Eyes, Qustodio, Bark, Boomerang, OurPact, and NetNanny) to set parental controls on devices. He added that free tools aren't as effective as premium services.

Jennings provided five commandments to fathers when it comes to protecting their kids' devices: get protection that both filters and monitors; have parental controls on every device; be the one to install new apps; follow kids on social media and know their passwords; and maintain and discuss the parental controls with their kids.

And fathers must practice the Gospel in their homes and use inevitable failures as opportunities to teach their kids about repentance and forgiveness, Jennings said.

And when their kids mess up? Jennings said fathers must plan now for how they will respond.

"When our children fail in the area of technology, we need to welcome them like Jesus," Jennings said. "If we tear into them, if we tell them how awful that was, how disgusting that was, how terrible they were for doing it -- if we're harsh, do you think they're ever coming to us again when they fail?

"So when our children fail, we welcome them," Jennings said. "We teach them the Gospel and we help them to walk in repentance."