Fayiz Saknini at home with his fellow Nazarene 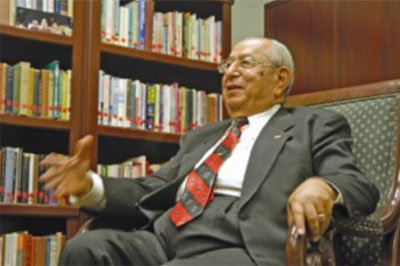 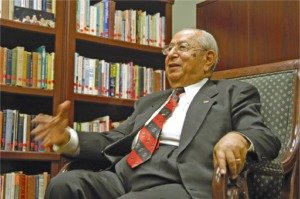 SMYRNA — One of God’s most cherished saints, Fayiz Saknini, age 90, died on Thursday, Aug. 17 at the Heritage Hospice Center in Marietta. His memorial service was held at First Baptist Church in Smyrna with Pastor Jeff Pennington officiating.

Pastor Saknini was Georgia Baptists’ missionary to Arabic-speaking people across the state and throughout the nation.

He was born in Jesus’ hometown of Nazareth on July 28, 1927, then born again as a teenager in Nazareth on Oct. 2, 1945 as a result of the ministry of Southern Baptist missionaries. He was baptized in the Sea of Galilee.

Having been born twice in Nazareth, he could justifiably be called a Nazarene.

Saknini began his professional life working with the British Oil Company in Haifa, Palestine. Due to the war, the company moved him to Lebanon in 1948, and eventually to Tripoli, Lebanon in April of 1949.

In Tripoli he became involved in Southern Baptist work in the North Lebanese area, assisting in the establishment of several churches and missions that are still active today.

The Nazareth native was ordained as a Baptist minister in 1949 before becoming founder and pastor of Tripoli Baptist Church for 11 years. In 1955, he married Emilia Joseph and became pastor of First Baptist Church of Beirut, Lebanon in 1960. He continued to serve there until 1976.

He also served as the president of the Lebanese Baptist Convention for eight years, and was the founder and chairman of L.O.V.E. Mission (Lebanese Overseas Village Evangelism). He was placed in multiple Christian leadership positions throughout the Middle East.

In 1977 the Southern Baptist Home Mission Board appointed Fayiz and Emilia as language missionaries. At that time they moved to Atlanta and served as consultants in Language Ministries of the Georgia Baptist Convention. He led hundreds of revival meetings, prophecy studies, and prayer seminars in Georgia and throughout the nation. In addition, he served as editor of Living Hope Magazine, founder and director of the Arabic Bible Institute in Georgia, and authored three books.

Sharing platforms with a single purpose

He participated in the Keswick Convention, England, and in the Billy Graham Evangelism Conference in Lausanne, Switzerland. In Switzerland and Singapore, he led studies  on behalf of the John Haggai Institute. Saknini participated in numerous mission trips to Asia, Africa, Europe, Latin America, and North America, including several mission trips to Far Eastern countries.

He was a powerful, God-anointed preacher and winner of souls. He was an example of Christlikeness. However, he was preeminently a man of prayer. Pastor Saknini could legitimately be placed in the same category of intercessors as George Mueller, E.M. Bounds, John “Praying” Hyde, Hudson Taylor, Samuel Chadwick, and Oswald Chambers.

Constantly seeing his prayers answered, he was convinced prayer does not fit us for the greater work, but that prayer is the greater work. His prayer life was the foundation for the power he had from God to preach and minister.

Now, Fayiz Saknini is in heaven with Jesus Christ, who also called Nazareth his hometown. Having been intimate for a long time, surely they have much to discuss.