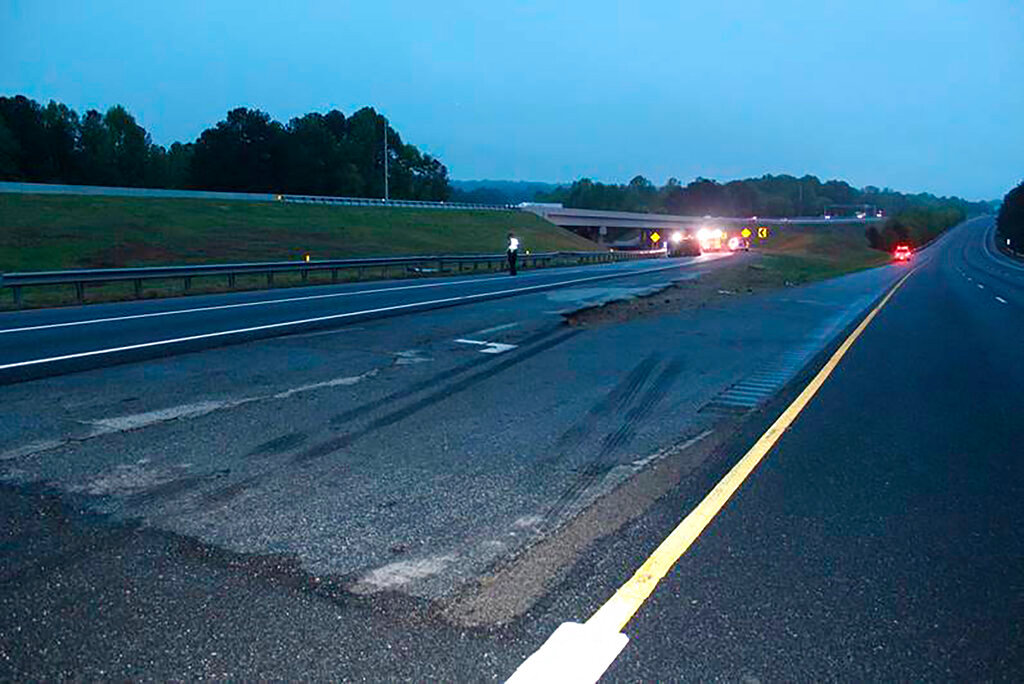 This photo provided by the Gwinnett County Police Department shows tire marks on the pavement, front, near the scene of a deadly crash in Gwinnett County, Ga., Saturday, April 24. 2021. Family members of women in a sober living group home who were killed and injured in a fiery van crash last year are suing a car company and the group home, saying the 2002 Dodge Ram was prone to tipping over and was not properly maintained. (Gwinnett County Police Department via AP, File)
Posted Thursday, January 27, 2022 11:06 pm
By JEFF MARTIN, Associated Press

KENNESAW, Ga. (AP) — Family members of women in a sober living group home who were killed and injured in a fiery van crash last year are suing a car company and the group home, saying the 2002 Dodge Ram was prone to tipping over and was not properly maintained.

Just before the April crash, a vehicle ahead of the passenger van unexpectedly changed lanes on a Georgia interstate, police said at the time. The van then went out of control, rolled onto its side and slid across two lanes, bursting into flames and killing six women inside, police said in an accident report. Ten survivors of the crash were taken to hospitals.

Flames grew rapidly as bystanders tried to save the motorists from the burning van, witnesses recounted later.

Many of the victims were part of a sober living community called We Are Living Proof, a group named as one of the defendants in a half-dozen lawsuits. They were filed this week in Gwinnett County, where the wreck happened along Interstate 85 northeast of Atlanta. The organization referred calls Thursday to an Atlanta attorney who did not immediately return phone messages.

The lawsuits also name the Chrysler Group and its parent firm, Stellantis, alleging that the van was poorly designed and prone to roll over. Messages left with Stellantis' media relations team were not immediately returned Thursday.

“This was a relatively minor tip-over," one of the lawyers for the plaintiffs, Alan Hamilton, said in a statement. “Everyone should have walked away. It’s a tragedy that due to the vehicle’s design, these women were trapped in a fiery inferno.”

The lawsuits also allege that the design of the van's steering system was faulty, and its fuel system allowed gas and gas vapors to ignite and burn the van's occupants after the crash.