Chole Robert, 11, delivers her first place entry in the "Why We Honor Our Veterans" essay contest. JOE WESTBURY/Index

Nearly 600 guests – many of them in uniform or wearing caps signaling their branch of service – crowded into the worship center for an hour-long service high on patriotism and thanking God for keeping His hand on the nation. 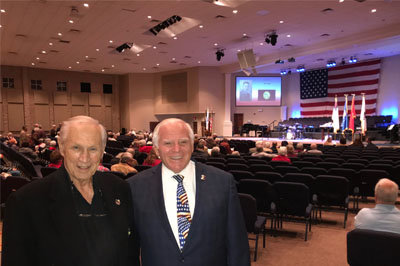 Longtime friends Army Chaplain (Colonel) Wayne King, left, and Lt. Col. Glenn Stringham, right, visit prior to the beginning of the Salute to Veterans. Stringham conceived the seven-year-old event. King, with 59 parachute jumps to his 22-year career, was Command Chaplain for the U.S. Army Special Operations. He has been a member at First Fayetteville since 1987. The two veterans served together at Fort McPherson in Atlanta. JOE WESTBURY/Index

The seventh annual gathering honored a Gold Star Family from Georgia whose son was one of four killed on Oct. 4 in a Special Operations mission in Niger; and recognized winners in the annual fifth grade essay contest.

Army Chaplain (Major) Phil Kramer delivered a stirring yet somber reflection on the sacrifices veterans make every day in service to their nation: sacrifice in being away from family, serving the nation regardless of political affiliation, and the commitment to lay down their lives in defense of the nation.

Kramer, from Lake Wales, FL, centered his comments around the theme of hope and sacrifice as he talked about ministering in both peacetime and wartime conditions. He currently serves as senior chaplain for the Army Rangers at Fort Benning near Columbus and is co-pastor of Crossroads Chapel, the base’s largest chapel community.

He previously served as chaplain with the Army’s 82nd Airborne Division, the Army’s Office of Chief of Chaplains at the Pentagon, and was an enlisted Marine before becoming a chaplain. He has deployed to Iraq and Afghanistan a total of nine times. 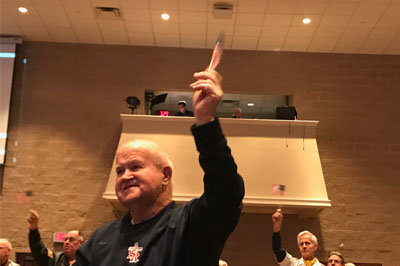 Elton Howard from Locust Grove waves his flag during a song at the veterans observance. As a Marine he was stationed at Paris Island awaiting deployment during the Cuban Missile Crisis in the 1960s. Of the Communists, he said, "I wanted to go kill them but now I want to help save them." JOE WESTBURY/Index

“Honor is the heart of what men and women serving in our armed forces commit to every day. When they enlist they pledge to lay down their life in the service of their nation. Their commitment is a direct reflection of what we read in John 15:13 where it says, ‘Greater love has no man than this – that he lay down his life for his friends,'” he stated.

He added that there is perhaps no more popular tattoo among veterans that that verse, calling it “a veteran’s verse.”

Kramer noted that patriotism has fallen on hard times and defended the American flag and the sacrifice it stands for. He said he fully understood the need for protest against injustice but such protest was being misdirected toward the flag.

For example, he acknowledged that for his parents, the 1950s were the best of times for economic prosperity and professional advancement … but quickly added that “for many others it was hell on earth.

“I have served under five presidents and have not agreed with all of them. Presidents come and go and we have had a lot since George Washington but we have only had one flag,” he continued. “It was meant to transcend all political parties. 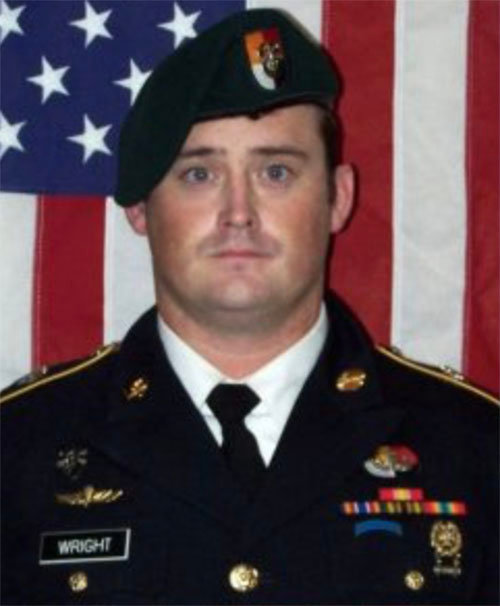 Staff Sgt. Dustin Wright was from Lyons. US MILITARY/Special

“Members of the Armed Forces do not say they will not show up for work because who is president; they show up because they took an oath.”

He then contrasted the difference between Veteran’s Day and Memorial Day, and the need to never confuse the two.

“The two holidays are separated by about six months on the calendar but the distance in the life of enlisted personnel is razor thin for some,” he added. Kramer then explained how dangerous military life is even when not serving on deployment or on a battlefield. He described a recent funeral over which he presided of a Ranger who died when his parachute failed to open.

“It is a risky business, even in peacetime. I cannot tell you when I have preached a funeral for someone over the age of 30.”

It is one thing to say we love our country but we need more than patriotism; we need hope, he added.

“Honor and hope are the two words I share at every funeral. The greatest message of hope that the world has even known is the hope found in Jesus Christ.

“There is no amount of red-white-and-blue bunting that can give us the hope what that lies beyond the grave” he concluded. 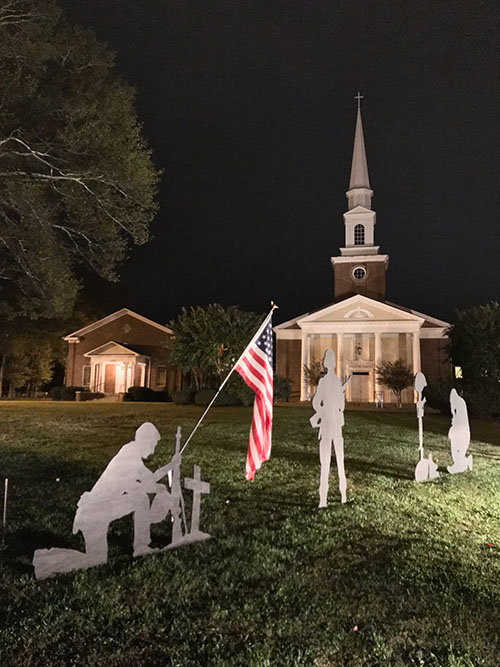 The front lawn of First Fayetteville was adorned with a veteran-themed display. JOE WESTBURY/Index

During the observance, members of the Armed Forces were honored with veterans and those currently enlisted standing to applause as their branch of service flashed on the screen and their anthem played in 1940s Big Band style by the Southernaires Big Band.

The family of Staff Sgt. Dustin Wright of Lyons was recognized, though they were unable to attend at the last moment. Wright came from a long family of enlisted personnel dating to 1812 and was one of four Special Forces soldiers who died in Niger on Oct. 4. According to The Washington Post, Wright, 29, was “a class clown who could quote just about any comedy movie; a short and chubby child, he grew up into a fearsome Green Beret and was preparing for a future with a girlfriend in Philadelphia.”

The family will be presented a memorial quilt sewn by women of the church.

The competition drew more than 300 essays from 5th graders, which were culled down to one from each of the county’s elementary schools. Eight finalists then competed for the top three awards which included a cash prize, certificate, and flag that had flown over the U.S. Capitol building. 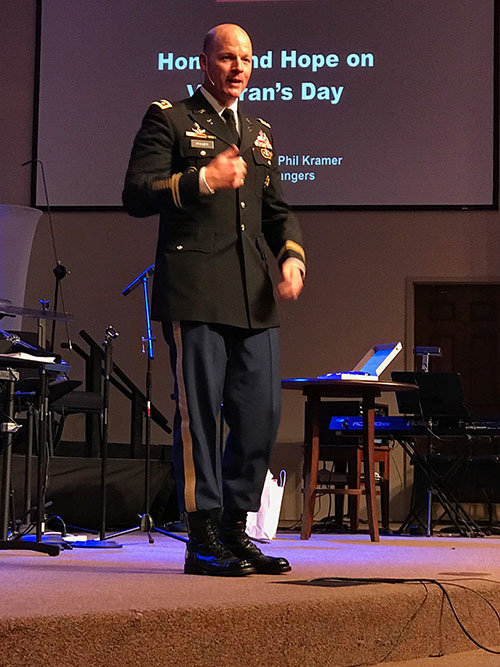 Chaplain (Major) Phil Kramer was the keynote speaker for the event, speaking on honor and hope. JOE WESTBURY/Index

First place went to Chloe Roberts of Robert J. Burch Elementary School, who read her essay to the group. Second place was awarded to Kamryn Marcus of Fayetteville Elementary, while third was given to Anna Keisling of Crabapple Elementary.

The service opened with the Presenting of the Colors by the Stockbridge High School Color Guard, followed by the “Star-Spangled Banner“sang by the McIntosh High School Capella Group. Later in the program Penny Miller sang “God Bless the USA” and “There She Stands.”

Stringham told The Index the Salute to Veterans event is the largest veterans observance in Fayette County. He added that he founded the essay contest to help students learn the importance of commitment and service to the nation which veterans provide. This year’s theme was “Why We Honor Our Veterans.”

Miller called the observance, which falls as close to Veterans Day as possible each November, “an important way to remind ourselves what our veterans have done to protecting our nation and our liberty. It has become a very popular way of bringing our community together to honor these men and women.”

Veterans’ Day is Nov. 11 but is being observed today on the nation’s calendar. 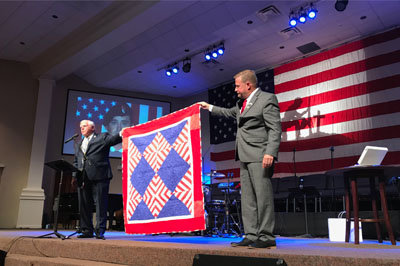 Lt. Glenn Stringham, left, and Senior Adult Pastor Jack Miller, right, show the memorial quilt which will be presented to the family of fallen soldier Dustin Wright of Lyons. The Gold Star Family was unable to attend at the last moment. JOE WESTBURY/Index