ATLANTA – Both the Senate and House of Representatives in Georgia regularly open their sessions with a devotion and invocation. On Feb. 2 Georgia Baptist Mission Board Executive Director J. Robert White was the minister chosen to lead the Georgia Senate in the morning devotional.

White had been asked to deliver the message by Senator Bill Heath of Bremen. Heath was elected to the Georgia State Senate in 2005 after serving a term in the Georgia House of Representatives. He represents the 31st district, which includes Haralson and Polk countries and a portion of Paulding County.

Lieutenant Governor Casey Cagle, who is a member of Blackshear Place Baptist Church in Flowery Branch, presented Heath, who in turn introduced the Georgia Baptist Mission Board executive director. White read from Micah 6:8, which says: “He hath shewed thee, O man, what is good; and what doth the Lord require of thee, but to do justly, and to love mercy, and to walk humbly with thy God?” 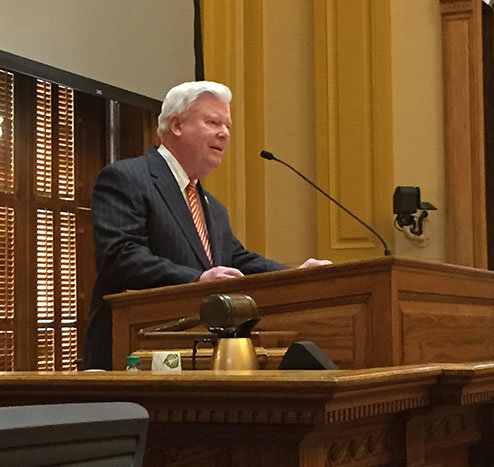 "David walked humbly with his God and his words in Psalm 51 beautifully illustrate that splendid virtue," White emphasized. "God saw that David had a heart of humility and said, 'He has a heart like mine.'” GERALD HARRIS/Index[/caption]

White then quoted Acts 13:22, where the Bible declares that God “gave testimony, and said, I have found David, the son of Jesse, a man after mine own heart, which shall fulfill all my will.” He proceeded to used the life of David, king of Israel, to illustrate the truths found in the text from Micah. He proclaimed, “First, we are to do justly; and David did what was right when he confessed his sin. God saw David do the right thing and said, ‘he has a heart like mine.’

“Second,” White emphasized, “We are to love mercy and David demonstrated that virtue when he fulfilled his covenant with Jonathan by providing for the needs of Mephibosheth.” (Mephibosheth was a crippled man who was "left over of the house of Saul” and in need.) When God saw David respond to Mephibosheth with such grace and love he said, ‘He has a heart like mine.’

“Third, David walked humbly with his God and his words in Psalm 51 beautifully illustrate that splendid virtue. God saw that David had a heart of humility and said, 'He has a heart like mine.'”

White then admonished the Georgia State senators to walk humbly with God, to love mercy, and to do justly – to simply do what is right in the strategic role they hold as representatives and servants of the people of Georgia.

The message was a pointed and poignant challenge to the members of the senate; and it was good to see Georgia Baptists in such significant roles of leadership – presiding, introducing, and preaching all from the podium of the Georgia Senate.