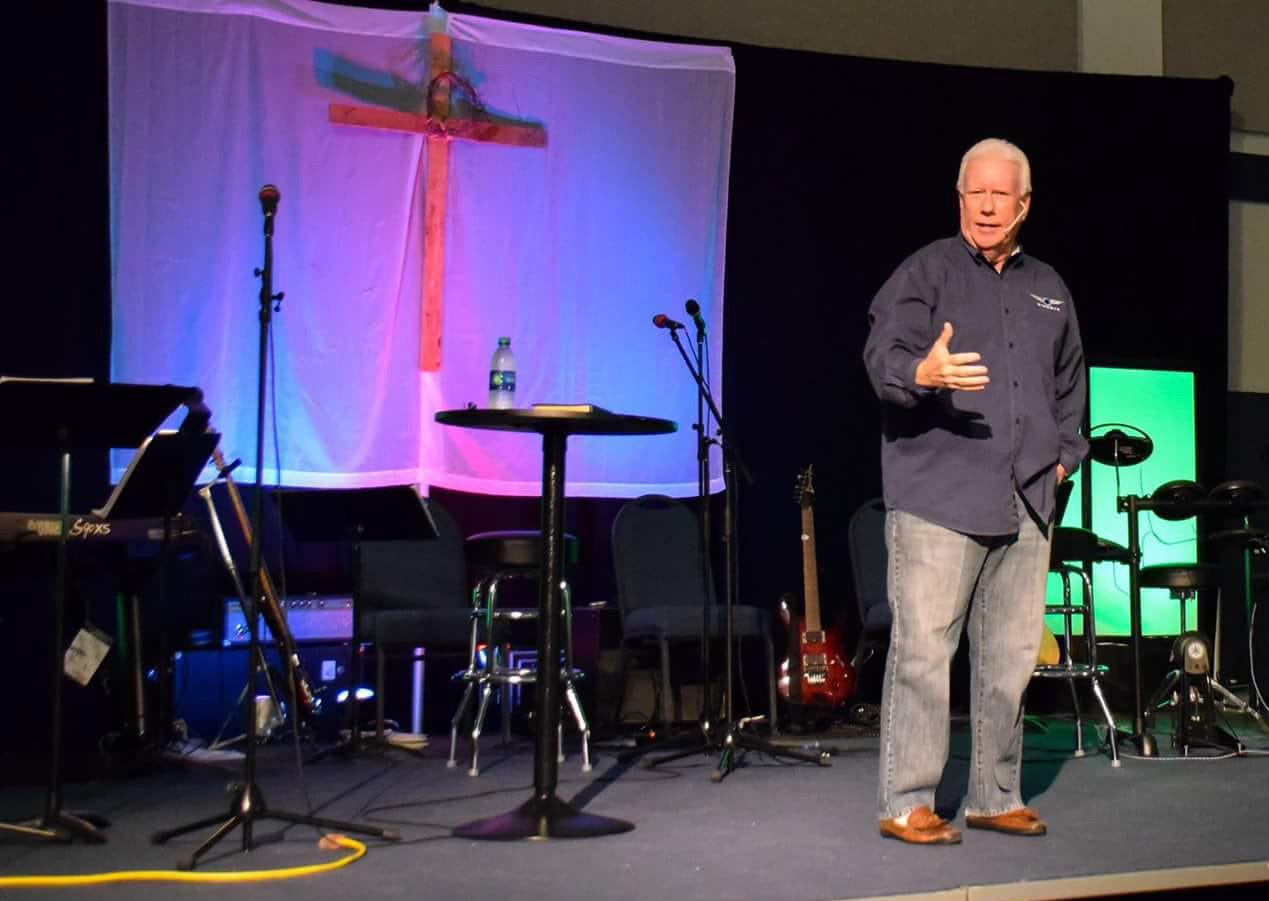 Randy Kennedy loves to share the Gospel of Christ Jesus. 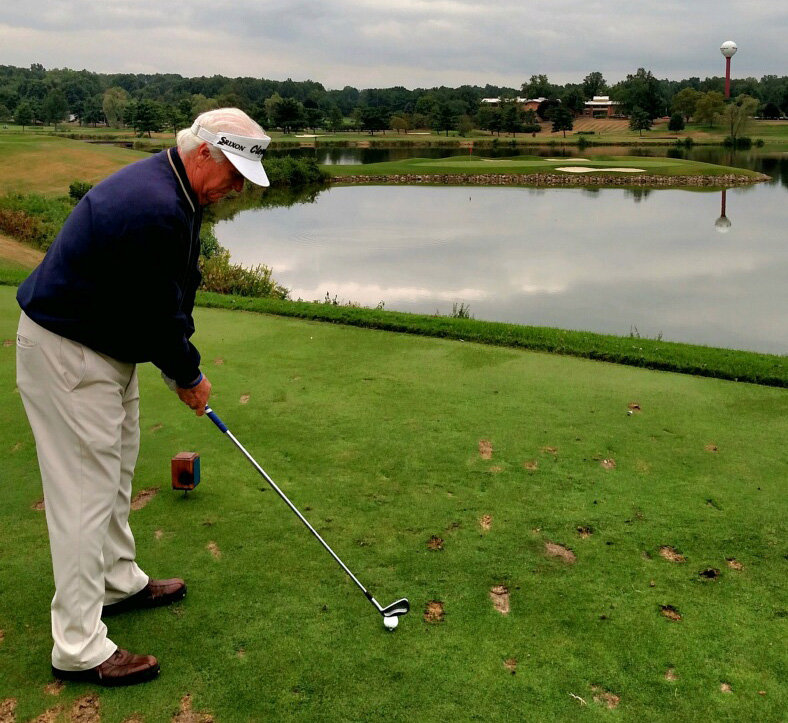 Randy Kennedy tees off on the par three at the Firestone Country Club in Akron, Ohio. 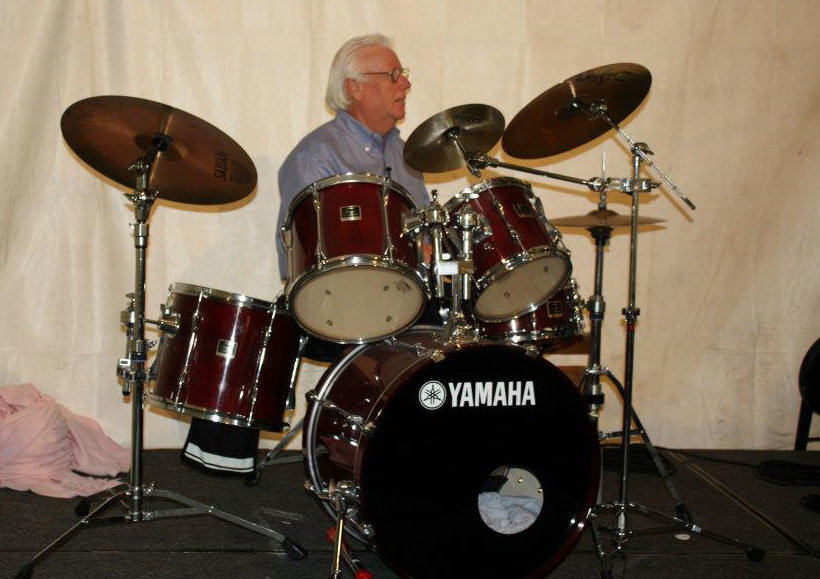 Randy Kennedy, interim pastor at Bethany Baptist Church, can keep rhythm at the drum set with the best of them.
Previous Next
Posted Monday, December 5, 2022 3:38 pm
By J. GERALD HARRIS, The Christian Index

BUFORD, Ga. – Randy Kennedy, current interim/transitional pastor of Bethany Baptist Church in Snellville, is one of the most winsome individuals you will ever meet. He is also versatile – very versatile.

The affable minister is not only an excellent preacher, but he has had an effective ministry to many professional athletes through the years. He is an exceptional golfer himself. He knows how to use a very big pencil to challenge and motivate people, and he is a percussionist. As a teenager and young adult, he played drums for a rock band called the Monarchs.

One might wonder if the rhythm required to play “Wipeout” on the drums as Kennedy has done with perfection is advantageous to one developing the pace, pulse and tempo for being successful on the golf course.

However, Kennedy is best known for having served as senior pastor of four Georgia Baptist churches and as an inspirational and motivational speaker. His wife, Lisa, has dedicated her life to ministering to people through music. Several years ago, she released an album of her music titled My Alabaster Box.

Dr. Kennedy served as chaplain of the NBA's Atlanta Hawks for ten years, and he started the chapel ministry for the AFL's Georgia Force upon their arrival to the Atlanta area. In addition to the pre-game chapels, he hosted a weekly Bible study open to players and staff in the organization. In 2006 Kennedy began ministering to the PGA's Sunbelt Senior Tour, both as a player and chaplain.

“Being able to share God’s Word with high-profile athletes has been one of the most rewarding aspects of my ministry,” exclaimed Kennedy. “Even though they earn millions of dollars I have seen the power of the Gospel and the love of God reach them at the same level as anyone else. However, I can not overstate the importance of developing a personal relationship with those you may be trying to reach for Christ.”

Kennedy continued, “Watching athletes respond to someone who genuinely cared for them and asking nothing from them was the key to building a strong and lasting relationship. It was that relationship that afforded me the privilege of leading some of the athletes to Christ, baptizing them, performing their weddings and in some cases conducting their funerals. I was a pastor to so many.”

Upon being urged to reveal the names of some of the players Kennedy was able to serve, he mentioned Dikembe Mutombo, Tim Conley, Lon Kruger, Mark Jackson, Doug Plank, Tree Rollins, Kevin Willis, Craig Ehlo, Roger Roland, David Robinson and even Michael Jordan (to some degree).

Many have compared some of the characteristics of athletics to the disciplines of the Christian faith. Kennedy agrees. He explained, “If believers embraced the mindset and the daily disciplines of successful athletes, they would very likely have a more meaningful life and a greater influence on those around them.

“Vision, focus, dedication, determination, perseverance in the world of athletics make all-stars. Those same qualities in lives of Christians makes them champions for the King of kings. If we are to be fruitful, we must be faithful whether we are athletes, Christians or both. True success in the sports arena and in the Christian faith never comes easy.”

Jesus said, “If anyone wants to come after me, let him deny himself, and take up his cross, and follow me” (Matthew 16:24). That statement describes the difficult road to Christlikeness or success in “the faith which was once delivered to the saints” (Jude 3).

Kennedy is eminently qualified to take a large basketball, a small golf ball, a prolate spheroid (football) and even a big pencil and present truths that are powerful and impactful. Because of his identity with various major athletic teams, Kennedy often speaks to men’s conferences, civic clubs, retreats, golf tournaments, and pastors’ conferences.

Like many believers, Kennedy is concerned about the spiritual health of the nation and believes it is urgent for Christians in particular and the church in general to become the light and salt that is to characterize all believers.

He explained, “Years ago, Dr. O. M. Cates, Director of Evangelism for the Georgia Baptist Convention, spoke at a Pastors’ Conference and after a stirring message challenging his hearers to action, stated, 'Now is the time! We are the people! And this is the place!'"

Kennedy observed, “This is so fitting for the church today in her present condition. God is waiting and willing to do a great work in us if we only would seize the moment. I believe that now is the time to wake up; and yes, we are His people, and we live in the place where God wants us to do a great work. Dr. Cates’ words are more profound today than years ago when he spoke at that conference. There has never been a greater urgency to be God’s ambassadors in a world of chaos and lostness.”