The men and boys gathered at Ephesus Baptist Church in Douglasville heard and saw an example of obedience through Hank Hough and his dog Bandero. EPHESUS BAPTIST/Special
Posted Wednesday, April 20, 2016 12:00 am
Gerald Harris

The men and boys gathered at Ephesus Baptist Church in Douglasville heard and saw an example of obedience through Hugh Hough and his dog Bandero. EPHESUS BAPTIST/Special

VILLA RICA – Have you ever seen the Word of God through the eyes of a dog? Over 400 men had that privilege at Ephesus Baptist Church here last Friday night. Hugh Hough is a devout Christian and a dog trainer. He is also the founder of Kingdom Dog Ministries and he uses his dogs to share the Gospel in a unique and compelling way.

It should be no surprise that God can speak through a dog. He spoke through Balaam’s donkey. According to Numbers 22: 28 the Bible says, “And the Lord open the mouth of the donkey, and she said unto Balaam, 'What have I done unto thee, that thou hast smitten me these three times?'”

At Ephesus, Hough had his eight-year-old black Labrador Retriever, Bandera, speak by demonstrating his obedience to Hough. As most people know, Labs were bred to be both a friendly companion and a useful working dog breed, but they can be readily taught to obey.

History tells us that originally these beautiful dogs earned their keep as a fisherman’s helper: hauling nets; fetching ropes, and retrieving fish from the chilly North Atlantic.

Today’s Labrador Retriever is as good-natured and hard-working as his ancestors, and he’s American’s most popular breed. Today these dogs work as a retriever for hunters, as assistant dogs to the handicapped, as show competitors, and search and rescue dogs.

Christian Sportsman Magazine described Kingdom Dog Ministries as “a backyard-born presentation of the Gospel of Jesus Christ delivered by, of all things, a hunting dog.” 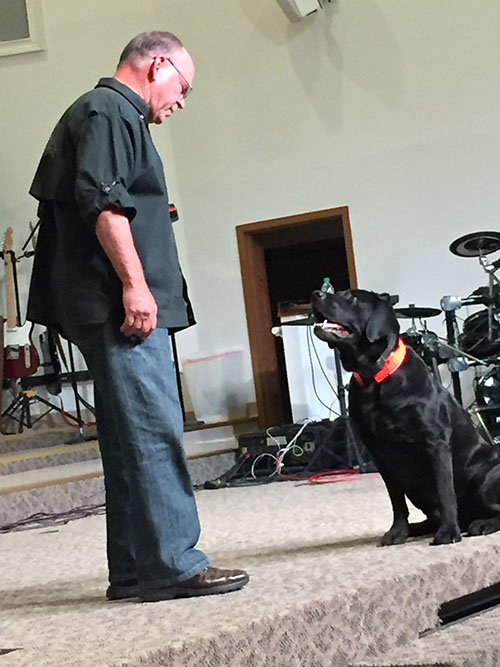 Hough doesn't use treats to train Bandero, but unconditional love. The method has brought a relationship where only the master's voice is heard. BILLY GODWIN/EBC

Hough is described in the magazine as “an avid outdoorsman” and asserts that “his hunting dog companions ... retrieved hundreds of ducks and geese from the marshlands and rice fields of Texas. That was on Saturday morning, because on Sunday mornings they were retrieving for Jesus in a church. That’s’ right, they go from swamps to churches, mud flats to carpets, duck blinds to cathedrals, camo to robes, and from guns to organ music. But the mission always remains the same. It is to ‘Go’ ... and find those that are lost, and return them to the Master.”

The men, youths, and young boys at Ephesus were fascinated by the remarkable obedience of Bandera and how attentive he was to the commands of his master. “Sit, because I love you,” Hough told Bandera. He doesn’t use treats to train his dogs, but simply uses an unconditional kind of love.  At times he commanded Bandera to sit and listen, which the dog obediently did. Hough stated, “We are to be still and listen for God’s voice.”

At one point Hough invited all 450 men and boys to shout and give instructions to Bandera. The trainer proved that his dog ignored the voices from the crowd and listened only to the voice of His master.  Hough pointed out that during the course of life men will hear many distracting and tempting voices, but it is the voice of the Master, the Lord Jesus Christ, that really matters most.

To give added weight to his point, he quoted John 10:27 where Jesus said, “My sheep hear my voice, and I know them and they follow me.”

Hough had “bumpers” – rubber chickens and ducks – that he scattered around the room. Each one took on a special meaning. There were times when Bandera was asked to fetch and release. At other times he was told to sit and leave the bumpers in their place until the right command was given. At other times the bumpers had to be fetched in a certain order. Bandera never failed to do as his master commanded. It was a striking example of the dog’s discipline and obedience in contrast to mankind’s defiance of authority and frequent disobedience.

According to Christian Sportsman’s Magazine, “KDM has a personal hope that the men of America will wake up for the sake of the country and their children and become engaged in the battle that exists between good and evil – to raise up men to become true champions for the Lord, prepared, eager, focused, and willing to go the distance never gone before, and yet capable of being satisfied to just faithfully sit in His presence.”

If God can use a donkey and a dog, it is very likely that He can use you, if you are willing.