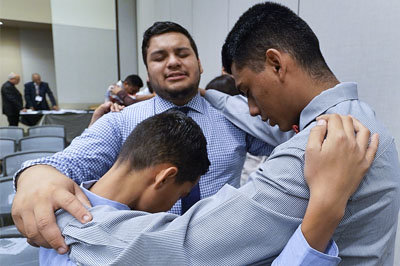 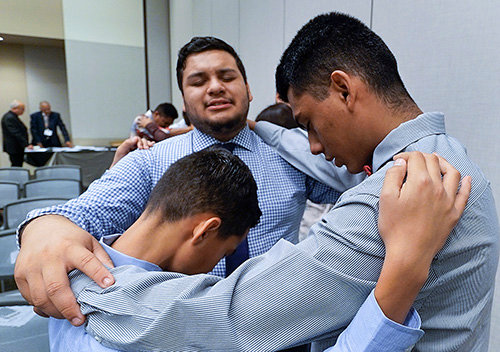 DALLAS — Each year numerous groups gather at the Southern Baptist Convention annual meeting to conduct business and serve as a reunion.

In Dallas, Hispanic Baptists will have several opportunities for fellowship, networking, discussion. and prayer:

NAAF, a fellowship of about 4,000 churches, will forgo its traditional Sunday service to worship with the SBC Pastors' Conference from 6-9 p.m. June 10 in support of H.B. Charles, the conference's first African American president and pastor of Shiloh Metropolitan Baptist Church in Jacksonville, FL. NAAF is pursuing plans to send representatives to Sunday morning worship at two Dallas-area churches and recommend those churches as worship sites for out-of-town annual meeting guests.

"Without them ... we would not have an ethnic fellowship like we have," Paul Kim, Asian American relations consultant of the SBC Executive Committee (EC), said.

The NAA will meet at 7 p.m. in Rooms A122-A123 on the first level of the Kay Bailey Hutchison Convention Center and will include members of the 2nd Generation Asian American Fellowship which grew out of the NAA to involve Asian Americans born in the U.S. and not necessarily fluent in their parents' native tongues.

Many Asian American Fellowships hold separate annual meetings in addition to gatherings at the SBC annual meeting. One of them, the Cambodian Fellowship, will meet June 27-30 at Blessing Field retreat center in Macon, Ga., with the theme "Set Apart," based on 1 Peter 2:9.

Discussions about helping pastors get started with a retirement plan and mentoring younger pastors are on the agenda of the Council of Korean Southern Baptist Churches in America's annual meeting in Dallas.

The Korean Council's June 11-13 sessions, which take place during the week of the Southern Baptist Convention's annual meeting and related gatherings, will be hosted by Semihan Church in Carrollton, where Byeong Rack Choi is pastor.

The Korean Council is a fellowship of about 850 Southern Baptist churches that increasingly are adding English-language services and ministries in addition to those in the Korean language.

One ministry proposal involves providing training for pastors and churches on topics like conflict resolution and best practices for pastor search committees.

A presentation of the Gospel message to demonstrate a contextual way of ministering to unreached and under-reached Native people will be part of the Fellowship of Native American Christians' annual meeting at 10 a.m. Monday, June 11, will be in Room A115-117, Level 1, at the Kay Bailey Hutchison Convention Center.

In addition to the contextual-themed presentation and worship led by Warren "Junior" Pratt and his family, known as the Tribe of Judah Native Dance Ministry, FoNAC's annual meeting will include reports from the executive director and groups in attendance who minister in a Native peoples' context as well as descriptions of an upcoming training conference and a new ministry outreach tool specifically for Native Americans.

The Southern Baptist Messianic Fellowship will finalize an organizational restructuring plan, hear reports of Jewish evangelism, and potentially discuss electing an executive director when the group gathers Sunday, June 10, at noon for a lunch meeting at TGI Fridays, 1713 North Market St. in Dallas.

The restructuring plan entails delegating more responsibility to SBMF officers and ministry leaders to facilitate support of SBMF personnel in the U.S., Canada, Israel, Russia, South America and elsewhere, said SBMF President Ric Worshill. While some SBMF members serving in Jewish evangelism ministries are International Mission Board or North American Mission Board missionaries, many are self-supported and depend on resources and encouragement from the fellowship.

With additional reporting by Art Toalston and David Roach of Baptist Press.