LAWRENCEVILLE — There is an old saying in the Peach State that pretty well sums up the cultural, racial, and economic diversity of the state. The saying goes something like this: “There is Atlanta, and there is the Other Georgia.”

Metropolitan Atlanta is the unequivocal economic engine that drives much of the state’s commerce, generates the largest amount of tax revenue, and attracts the greatest amount of cultural diversity.

But Atlanta needs those vast rural areas to generate agricultural profits from crops such as peanuts and peaches for export as well as vegetables for the state’s tables. It takes farmers who labor against environmental odds of drought and rain and immigrants who toil for poverty-level wages to harvest crops that few native-born Americans want to pick.

There are counties of all sizes with their own unique value that are part of the great quilt which makes up the State of Georgia.

And then there is Gwinnett, with 850,000 residents the state’s second most populated county and by far the most ethnically diverse. To paraphrase another saying, if you want to see what heaven will be like, look at Gwinnett County.

Hugh Townsend and his staff of church planters are working to assure that as many of the native-born Georgians, immigrants, refugees … and yes, even Yankees … hear the Good News and take it to their own friends and neighbors.

The Association will be hosting the 196th Annual Meeting of the Georgia Baptist Convention on Nov. 13-14 at North Metro First Baptist Church in Lawrenceville. The annual meeting will be preceded by the Inspirational Rally and missions service at 6 p.m. on Nov. 12. 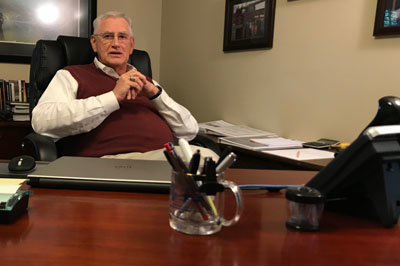 Hugh Townsend has served as part-time intentional Director of Missions for the Gwinnett Metro Baptist Association for the past 5 years. JOE WESTBURY/Index

Townsend, who had already retired from a career with the former Home Mission Board and its successor – the North American Mission Board – assumed the role as Intentional Director of Missions in 2013. He expected his role to be just a year or two duration but was eventually offered the role as permanent part-time director.

“You know, it’s one of those Baptist jobs with full-time responsibility and part-time pay,” he says with a laugh. But Townsend is up to the task and is committed to knitting a team of volunteers and church planters to do whatever it takes to reach Gwinnett – and by extension, the world – for Christ.

The Association, as many nationwide, has fallen on hard times after the Great Recession and is struggling to get back on its feet. He notes that Gwinnett Metro Baptist Association has just completed its second year of marginally out-giving its budget. It’s not a great victory, but he will take the victory in whatever form it takes.

“The health of the Association is good,” he says with a sense of pride.

Townsend is no stranger to the calling. He spent 23 years with HMB/NAMB working with Associational Directors of Missions throughout the nation. He is familiar with their struggles and successes and knows the minefields to successful ministry.

And he admits the challenges that face himself and his colleagues, some a few decades younger. 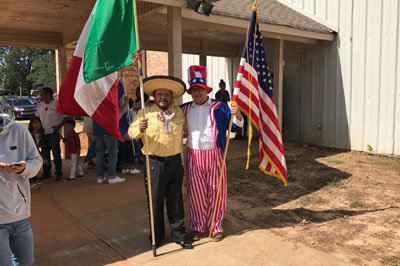 Members at Iglesia Bautista Hispanoamericana in Lilburn emphasize the strong relationship between Mexico and the United States during the church's recent 24th anniversary. Pastor Rolando Ruiz serves the church, which is the largest Hispanic church and the second largest ethnic church iin the Association. JOE WESTBURY/Index

“Churches are less committed to Associations than any time in my career. Many churches are becoming more isolated, more independent from the denomination in spite of maintaining a loose affiliation with their state or national Convention. But that does not mean they are isolationists; rather, they are creating their own networks due to the ease of cultivating relationships through the Internet.”

In short, the state convention or national denomination are no longer the only game in town.

But he is not ready to count the Association model ­– the backbone on which the Southern Baptist Convention was formed – down and out. He believes with the right vision in tune with the times, the Association can be just as valuable as it was at its founding before the SBC existed.

“Nationwide in the past several years, Associations became more involved in actually doing ministry for their churches rather than partnering with those churches, working with them to involve their laity. I think we have turned the corner on that approach and are more concerned with being a resource to those churches, walking with them to equip them to reach their own mission field,” he says.

Gwinnett County is an especially difficult mission field, he adds.

“At the end of the 1996 Olympics this county exploded more than any other with diverse people from all over the world moving here. Some were immigrants, other refugees, and others were business people who saw a truly international city that was a great place to do business.”

That brought a plethora of peoples and languages to what was once a sleepy and backwater community of metropolitan Atlanta.

“This county is preparing to cross over the 1-million mark in the very near future. Just two years ago county officials predicted a 239,000 increase in the next decade; all indications are that we will have no problem reaching that prediction,” he says.

Townsend and his group of church planters – representing Hispanic, West African (Ghana), East African (Kenya), African American, Anglo, Bhutanese, and Korean – are working hard to assure that as many of those new residents as possible have the opportunity to hear the Good News in their own language and cultural context.

“We are definitely a field white unto harvest,” he adds.