ATLANTA — As the sun rose this morning over mass destruction of homes and lives in South Georgia following the weekend tornadoes, Georgia Baptists and state legislators remembered in prayer those who lives have been forever changed.

The prayer was part of the annual Legislative Prayer Breakfast held at daybreak on the 20th floor of the James “Sloppy” Floyd Building in downtown Atlanta, overlooking the Gold Dome across the street.

Georgia Baptist Mission Board Public Affairs Representative Mike Griffin presided over the meeting, welcoming legislators early in their 2017 session. He affirmed them in their work and assured them of the ongoing prayers of churches on their behalf. 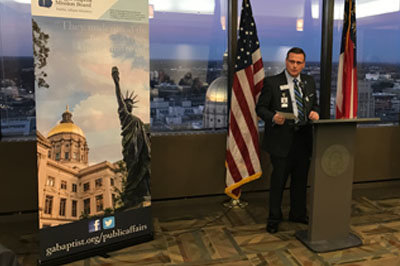 “The Bible is clear that God created government as revealed in Romans 13:1. It is also clear about the responsibilities of every citizen to honor and pray for all of our civic leaders,” he began.

“The environment you are serving in is quite hostile. It is one thing to have dialogue and debate over differing views but another to threaten, intimidate, and harass someone with whom you disagree. 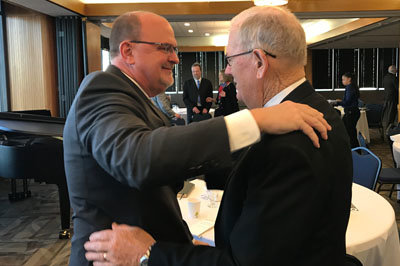 “The truth is, this is nothing new," continued Hammond. "People have been behaving badly against those with whom they disagree for a long time … all the way back to the days of Cain and Able.”

He then drew references from the story of Nehemiah and stressed the importance of the sacred and the secular working together rather than in opposition. He referred to his own congregation partnering with the City of Alpharetta to help rebuild homes for citizens with limited financial means.

“Where would America be without the sacred?” he asked. 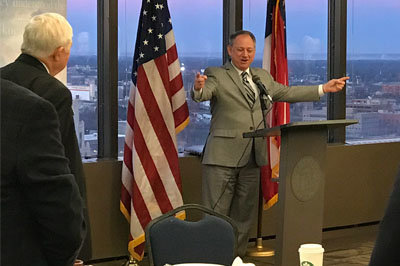 Then he asked, “Where would America be without the secular?”

“Nehemiah showed us how the secular and sacred … the sacred working through government … must work together.  Both are vital to the nation.”

Hammond then focused on lessons learned from studying the Book of Nehemiah. He talked about the relationship between Nehemiah, the governor of Persian Judea representing the secular, and Ezra, the priest representing the sacred, and how they worked together to rebuild Jerusalem.

First, you have to know your calling “I didn’t tell anyone what God laid on my heart to do for Jerusalem.” – Nehemiah 2:12

Second, know where your strength comes from, “The God of heaven will prosper us.” ­– Nehemiah 2:15

And third, don’t let your enemies distract you from your call. “I am doing a great work, so I cannot come down.” – Nehemiah 6:3. 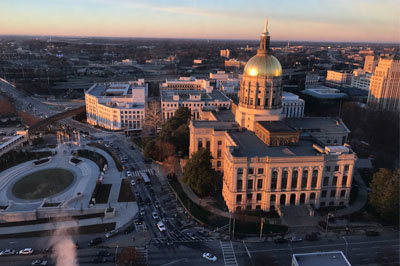 Legislators and Georgia Baptist Mission Board representatives enjoyed breakfast and a short program as the sun came up over the State Capitol across the street. JOE WESTBURY/Index

Hammond concluded that it was time for a revival to break out of the church house and spread to the school house, courthouse, and statehouse.

As if to illustrate how well the church and state can work together, State Insurance Commissioner Ralph Hudgens stood from the floor to relate how he had just returned from a tour of the tornado damage in South Georgia and how encouraged he was when he saw the bright yellow jackets on the scene.

“When I saw those jackets I knew the Georgia Baptist Mission Board was ministering to our citizens and providing them with the spiritual encouragement they so badly need for the coming days,” he said.

The closing prayer was brought by John Yarbrough, director of alumni relations and public policy for Truett McConnell University in Cleveland.