Hammond to BPC grads: "Do not stop being a learner"

BPC graduate Augusto Naccarato poses with his family and soccer teammates following the May 7 commencement ceremony fro the Class of 2016. SARAH BULLARD/Special
Posted Monday, May 9, 2016 2:33 pm
The Christian Index

BPC graduate Augusto Naccarato poses with his family and soccer teammates following the May 7 commencement ceremony for the Class of 2016. SARAH BULLARD/Special

MOUNT VERNON — “Do not stop being a learner,” Georgia Baptist Convention President Thomas Hammond told Brewton-Parker's 67 graduates in their commencement ceremony on May. 7.

The concluding chapel service for the Class of 2016 was held in Saliba Chapel and formally dispatched the students to the work place beyond the boundaries of the campus.

Preparation for the future

Hammond, who also serves as pastor of Alpharetta First Baptist Church, told students their achievement had given the preparation for the future. He quoted Proverbs 3:5 and told the graduates, “Trusting in the Lord is an act of humility, surrender, and understanding of a supreme God.” He added that trusting in the Lord was also a choice. 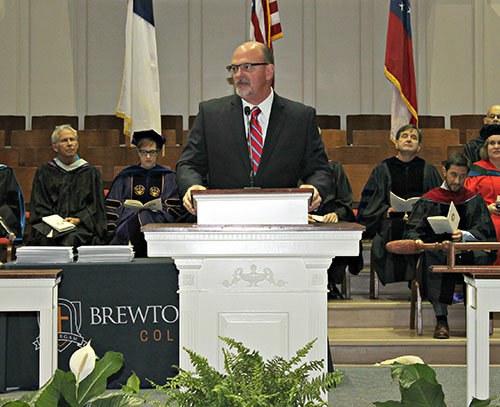 “You’re here today because of your choice. Right choices lead into the pathway of righteousness.”

The college also presented a diploma to the family of Timothy Caleb Crews who passed away earlier this semester. He was scheduled to graduate on Saturday.

Many Corbin serves as Brewton-Parker College's director of marketing.