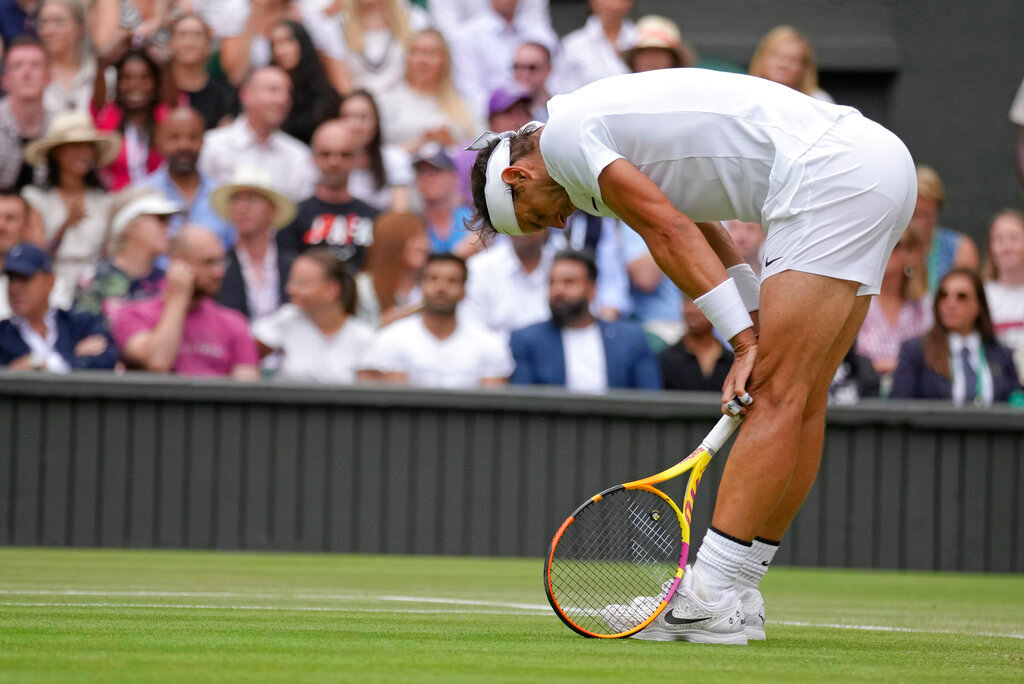 Spain's Rafael Nadal reacts after losing a point to Taylor Fritz of the US in a men's singles quarterfinal match at the Wimbledon tennis championships in London, Wednesday, July 6, 2022. (AP Photo/Kirsty Wigglesworth) 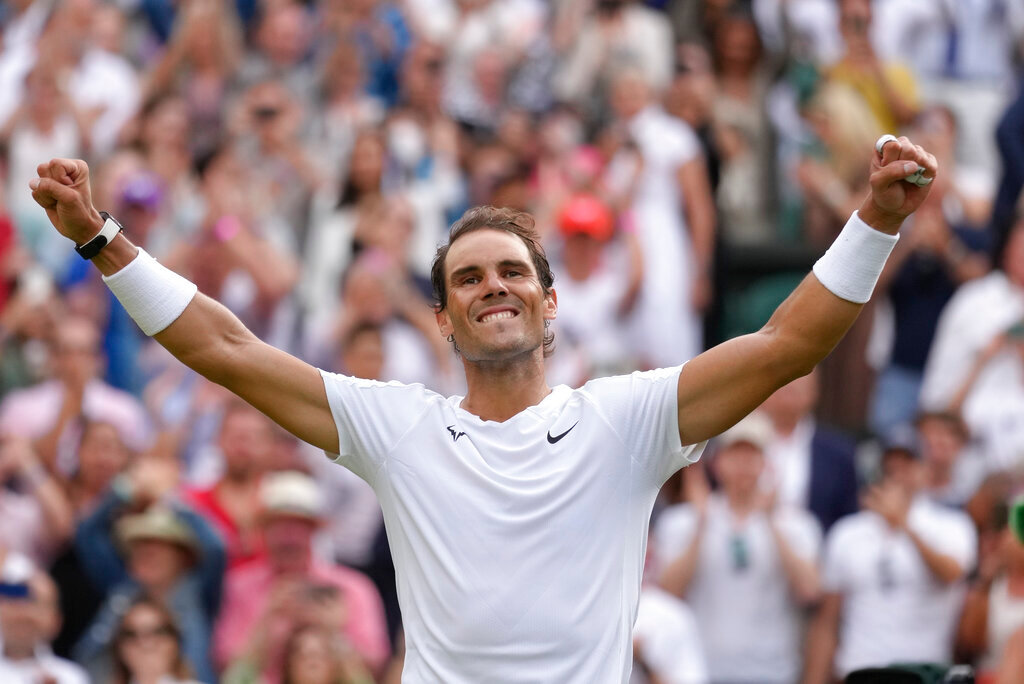 Spain's Rafael Nadal celebrates after beating Taylor Fritz of the US in a men's singles quarterfinal match at the Wimbledon tennis championships in London, Wednesday, July 6, 2022. (AP Photo/Kirsty Wigglesworth) 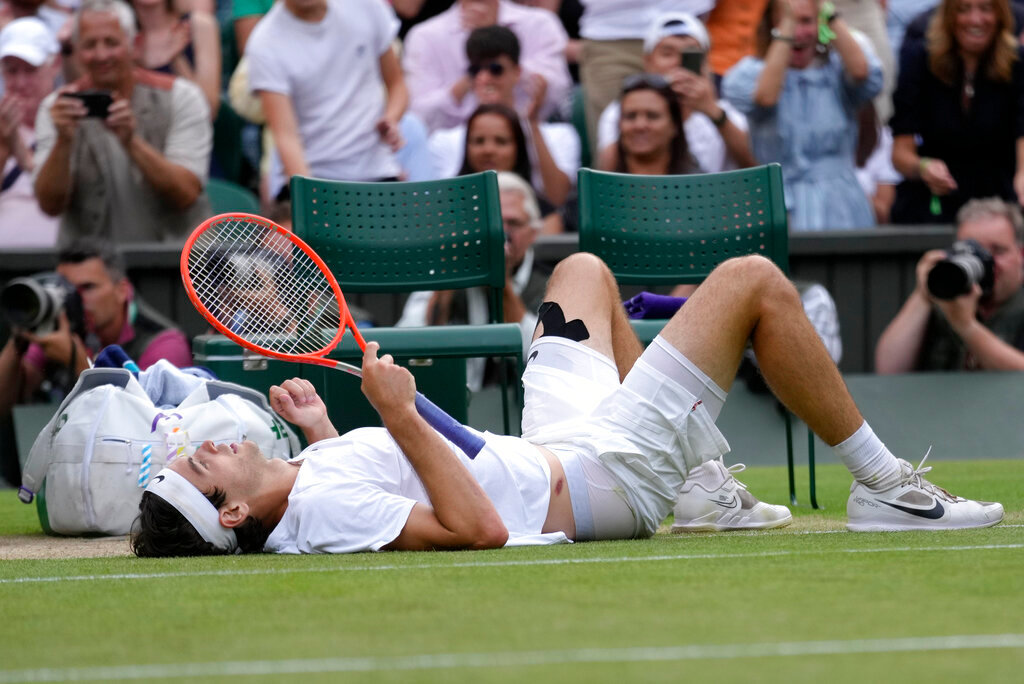 Taylor Fritz of the US lays on the court after falling trying to return to Spain's Rafael Nadal in a men's singles quarterfinal match at the Wimbledon tennis championships in London, Wednesday, July 6, 2022. (AP Photo/Kirsty Wigglesworth)
Previous Next
Posted Wednesday, July 6, 2022 4:27 pm
By HOWARD FENDRICH, Associated Press

WIMBLEDON, England (AP) — Wincing from abdominal pain, unable to ply his customary relentless style of tennis, Rafael Nadal worried that he might need to stop playing in the Wimbledon quarterfinals against Taylor Fritz.

Up in the Centre Court stands, Nadal's father was waving his arms, motioning to the 22-time Grand Slam champion to quit. Not surprisingly, perhaps, the kid didn't listen. Nadal stayed out there, adjusted his service motion and his strategy — and figured out a way to win.

With much of the crowd roaring and standing after Nadal's best strokes, he twice erased one-set deficits against the 11th-seeded Fritz and emerged with 3-6, 7-5, 3-6, 7-5, 7-6 (10-4) victory Wednesday to reach his eighth semifinal at the All England Club.

“For a lot of moments,” Nadal said, “I was thinking, ‘Maybe I will not be able to finish the match.’”

He got to his 38th career major semifinal by denying what would have been a first such appearance for Fritz, a 24-year-old American who defeated Nadal in the final at Indian Wells, California, in March. That ended a 20-match winning streak for Nadal, who was bothered that day by a painful rib injury.

This time, the problem was a muscle in his stomach area, which had some athletic tape, as was also the case for Nadal’s fourth-round match Monday, when he declined to discuss it. On Wednesday, Nadal left the court with a trainer for a medical timeout while up 4-3 in the second set; Fritz paced around the baseline waiting for action to resume.

When it did, Nadal clearly was compromised. It was hard not to think: Might he give up? Nadal acknowledged that went through his mind. Perhaps that was in Fritz’s, too, because his level of play slipped precipitously for stretches.

He pretty much handed over the second set of what would become a 4-hour, 21-minute contest under a sky of slate clouds. After Fritz took the third set, his big serve got broken three times in the next.

Nadal occasionally would watch a ball off Fritz's orange racket fly by. Nadal couldn’t move the way he usually does. His trademark grunts of “Uhhhh!” were rare. He didn’t generate the usual zip on his serves, which dipped from a high of 120 mph to barely above 100 mph. He sought to end exchanges with a quick-strike forehand or a drop shot — sometimes with success, often not.

“A tough afternoon. Not an easy match at all,” Nadal said. “In the abdominal, something is not going well.”

Still, he summoned his best for last, grabbing a 5-0 lead in the closing tiebreaker — the first-to-10, win-by-two format starting at 6-all in a fifth set is new to Wimbledon this year — and then five of the last six points. By doing so, Nadal extended his unbeaten mark in Grand Slam matches in 2022 to 19-0 as he seeks to add a trophy at Wimbledon to his triumphs at the Australian Open in January, then the French Open in June. For everything that he’s accomplished, the 36-year-old Spaniard never has won the first three Slam titles of a season.

On Friday, Nadal will meet Nick Kyrgios, a 27-year-old Australian who will be making his Grand Slam semifinal debut after a 6-4, 6-3, 7-6 (5) victory over Cristian Garin of Chile.

The other men’s semifinal will be No. 1 Novak Djokovic against No. 9 Cam Norrie.

The women’s semifinals Thursday will be 2019 champion Simona Halep against No. 17 Elena Rybakina, and No. 3 Ons Jabeur against unseeded Tatjana Maria. Halep advanced by eliminating No. 20 Amanda Anisimova of the United States 6-2, 6-4, and Rybakina came back to defeat Ajla Tomljanovic 4-6, 6-2, 6-3.

Asked to look ahead to facing Kyrgios, Nadal began with this ominous-sounding statement: “I hope to be ready to play.”

“I feel like that would be a mouth-watering kind of encounter for everyone around the world,” Kyrgios, never afraid of a little hyperbole, said about facing Nadal again. “That would probably be the most-watched match of all time.”

Give Kyrgios credit for honesty on this matter, at least: Even he did not think this day ever would arrive. Kyrgios became the first unseeded and lowest-ranked man to get to the final four at the All England Club since 2008 by playing what, for him, amounts to a restrained and efficient brand of tennis against Garin.

“I thought my ship had sailed,” Kyrgios said. “Obviously, I didn’t go about things great early in my career and may have wasted that little window."

Kyrgios, who is ranked 40th, has garnered more attention for his behavior on and off the court than his skills with a racket in hand. His match against the unseeded Garin, a 26-year-old from Chile, came a day after police in Canberra, Australia, said that Kyrgios is due in court next month to face an allegation of common assault stemming from something that happened in December.

“I have a lot of thoughts, a lot of things I want to say, kind of my side about it,” Kyrgios said at his post-match news conference Wednesday. “Obviously I’ve been advised by my lawyers that I’m unable to say anything at this time.”

Worth noting, too, is how well Kyrgios has been playing. His serve, in particular, is among the best in the game, regularly topping 130 mph, and he pounded 17 aces against Garin while getting broken just once — in the very first game, at love.

His big forehands are terrific, too, but little else is conventional about Kyrgios. One example: “I don’t have a coach,” Kyrgios said with a smile. “I would never put that burden on someone.”