BOWMAN —A special service Dec. 4 celebrated funds raised by Hebron Baptist Association churches to translate the Gospel of Luke into the language of an unreached people group.

Held at Cornerstone Baptist Church in Hartwell, the event culminated a process that began a year ago. In the summer of 2015 Hebron associational missionary Steve Ferguson reconnected with a friend from college, Bruce Boring, now working with The Seed Company, affiliated with Wycliffe Bible Translators. That led to a meeting with local pastors at the association office the following November.

“Bruce explained there were around 1,800 language groups with no access to Scripture,” said Ferguson. “They wanted to produce a translation of Luke for a people group in China. To do this they needed roughly $35 per verse.”

The churches dotting the countryside between Athens and the South Carolina border exceeded the $40,285 needed for the translation, raising approximately $42,000 in the effort. 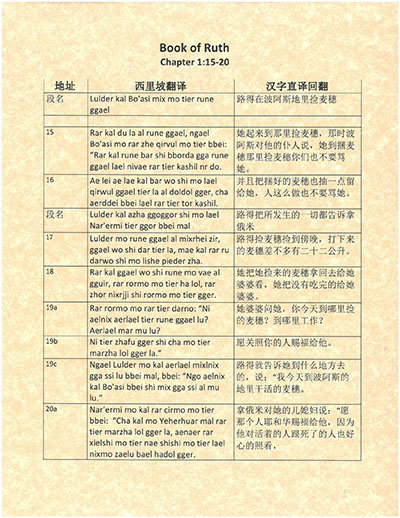 A translation of the Book of Ruth is also being developed for people groups without a copy of Scripture in their own language. (Click to enlarge)

The basics of communication

The process of building out a translation into another language is complex, to say they least. Compound that when the group has no written language, as was the case here. It involves working with local churches near the group, partnering with leaders in that oral culture to develop an alphabet and dictionary, and running the translation through community testing. As one would expect, communication down to the smallest detail is crucial.

After that November meeting Ferguson went to association churches and presented the need for a translation of Luke. With the aid of Seed Company videos, he told how churches in rural Georgia can be a part of presenting Scripture in someone’s native language for the first time.

“At one church the pastor stood and announced they’d take up an offering right then,” Ferguson recalled. “They gathered $500. Another small congregation gave $6,000. Others brought similar amounts.”

While bringing together those offerings, association churches continued other missions endeavors. As an example, Ferguson will accompany a trailer holding some 500 backpacks from churches donated for Appalachian children. Those backpacks will add to the record number collected by Georgia Baptists this year.

The Bible people have

At the Dec. 4 dinner one presenter gave his testimony on the impact of Scripture. Just seven years old when he received a copy of the Bible in the Philippines, he gave his life to Christ. Eventually, he went to Moody Bible Institute. That led to his current job as a pilot for Wycliffe translators, bringing the Gospel to others in his position long ago.

Media such as screenings of the Jesus film open up people groups to the Scriptures, said Ferguson. “I showed our churches a video a tribe in Ethiopia watching the Jesus film for the first time and weeping when Jesus went to the cross. A question came to my mind: 'When was the last time we wept about Jesus going to the cross?'"

Technology moves the process of presenting Scripture to a people group more quickly these days. In addition to Luke, translators are producing a translation of Ruth.

When speaking to churches Ferguson’s friend, Boring, would hold up a Bible to the church. Nothing about it seemed out of the ordinary. That is, until Boring started flipping through its page. The fluttering of white sheets containing no words, just empty space, brought the message home.

“He pointed out that this was the only Bible many people had,” stated Ferguson.