Attendees to the Sudanese Christian Family Conference gather in the amphitheater of Ridgecrest Conference Center in July. GORASHI GANGI/Special

CLARKSTON — Gorashi Gangi sees it happen during the worship time.

If you want to see if for yourself, go one Sunday to Sudanese Christian Missionary Church, a Georgia Baptist congregation in Clarkston. Understand, though, that worship begins at one in the afternoon and doesn’t end until around three. 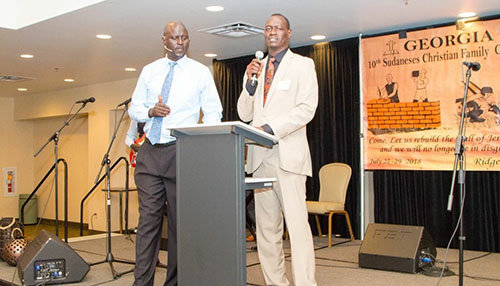 Gangi, senior pastor of the church, has watched the connection build since helping plant Sudanese Christian Missionary on New Year’s Eve 2002. A native of Sudan who fled the country in 1999, Gangi spent 18 months in Egypt. There, his wife Rania gave birth to their first son, Patrick. The family eventually made their way to Clarkston in 2001.

It must have been surreal for Gangi, 48, to think back on those times as he joined with hundreds of other Sudanese, all with similar stories, last July at Ridgecrest for the Sudanese Family Christian Conference.

Because like the thousands of other refugees who have helped transition Clarkston into “the Ellis Island of the South,” Gangi appreciated his now home. But still, “it was a new experience,” he says.

Getting a job, attending classes

“It was a different culture with different food and a different language,” adds Gangi, who spoke a little bit of English to go with his Arabic when he arrived. He determined to become more affluent in English and did that through help at Clarkston Baptist Church (now Clarkston International Bible Church). He also attended school, including seminary classes at Luther Rice and New Orleans Baptist Theological Seminary’s Atlanta extension. 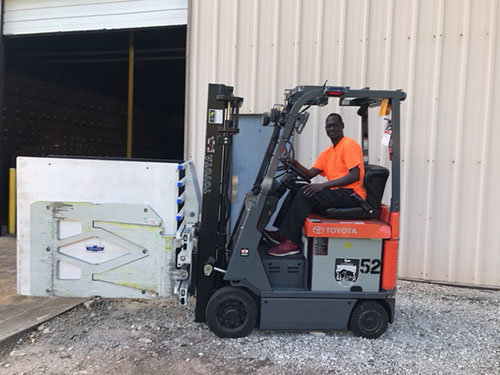 In addition to serving as pastor of Sudanese Christian Missionary Church in Clarkston, Gangi has operated a forklift for several years. GORASHI GANGI/Special

Since 2002 the bivocational pastor has worked as a machine operator and then forklift driver for Dart Corporation, which supplies restaurants with Styrofoam cups and containers.

The “it” Gangi notices during worship is that sense of community the Sudanese church has built among its members. And while worship is important, it’s only part of the church’s mission including preaching, teaching, discipleship, and evangelism.

Influence from a Georgia Baptist legend

Gangi credits the late Fayiz Saknini with being a spiritual father to the congregation. Saknini ordained Gangi and his associate pastor, mentoring them and others. Sudanese Christian began with around 40 people and now has approximately 80, says Gangi. Over the years many members have moved to different states to start churches. That was the case with co-founder Molok Deng, who started a congregation in Nashville, Tenn.

The church made of refugees went on the move not out of necessity, but obedience.

“When we started back in 2002, some of our members went to the American church that morning but also wanted to come to ours,” explains Gangi of the worship time. “We just kept the time where it was because it seems to work best for everyone.”

Gangi works with four other pastors in the church to host Saturday Bible study home groups. The groups meet in Clarkston but also in Gwinnett and DeKalb counties. Prayer time is also a part of the gatherings where neighbors and church members are invited to attend.

Gangi became a Christian at 15 and entered the ministry at 19 while still living in his native Sudan. A trip to a youth camp in 1989 introduced him to older believers who discipled him. 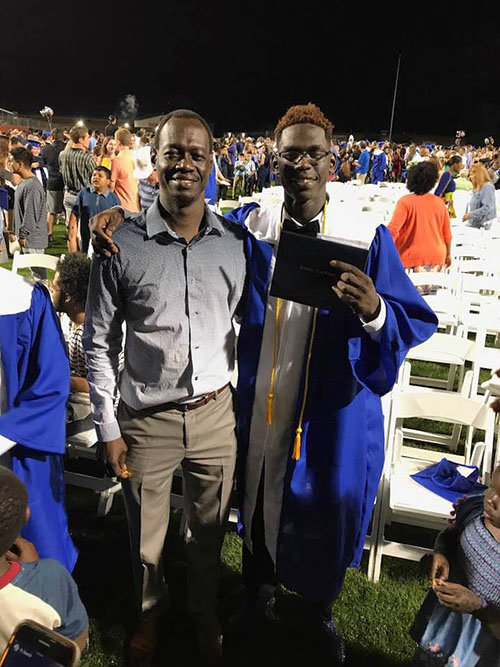 Pastor Gorashi Gangi stands with his son, Patrick, at Parkview High School's graduation ceremony last spring. Patrick, who came to America as a baby, will begin classes in January at Georgia Southern University, where he will study Criminal Justice. GORASHI GANGI/Facebook

That spurred him in his faith at home.

“We would study the Word, pray, and go do outreach in the area,” he says. “Most of the people we talked to were Muslims, so we had to be careful as that could be dangerous.

"Still, the Lord helped us and we reached many of them.

“We knew many of them before and they knew us. This helped with building relationships because we were familiar to them. This was how the Lord used us.”

Gangi continued that ministry for ten years until civil war broke out. As a Christian, he became a target of the army and had to flee to Egypt. Although his tribal heritage made his family targets as well, he says his parents were not considered threats to the army due to their lack of education and age.

“The war started in my region of the country outside of the capital. Young people were targeted because they were seen as capable of making a difference,” he points out.

Gangi spent 18 months in Egypt working in another Sudanese church before coming to America.

From fleeing war to sending others on mission

This year the event shifted to Ridgecrest Conference Center in North Carolina. Gangi reported 450 in attendance, some from as far away as Sudan. Next year, the Sudanese Christian Family Conference returns to Toccoa.

“It’s the largest conference for Sudanese churches in America,” he says. The connection – the “it” – is felt even more strongly with Sudanese from around the country, he adds. Worship pulses with songs like “We Lift His Name Higher” and “There is Power in His Blood” sung in a mix of Arabic, English, Swahili, and Arbyjuba (a south Sudan dialect).

“There is worship, preaching, and teaching at the retreat,” he says. “We bring in a lot of people to do that. There are also nonbelievers who appear, though, so we share the gospel with them.”

This happens, he asserts, through children connecting together on social media. Those children want to attend the conference and, of course, need their parents to take them. This results in several unchurched and unsaved going to the event. Many attendees, Gangi points out, use their vacation time to go.

“I’ve seen 40, 50 people accept Christ on the first day,” he testifies. “I’ve seen others become stronger Christians in their churches and neighborhoods. We’ve had some from Canada, England, and 17 states.

“These people are really helping their local churches when they go back. It’s having a great impact.”