How do Christians overcome bad things? 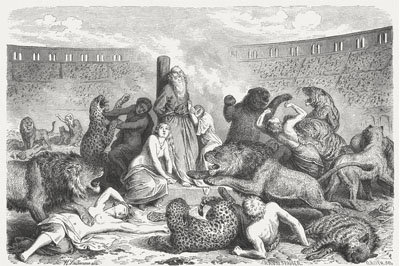 We are using the challenging and controversial I Peter 3:18-22 to help us answer three Tough and Troublesome Questions, beginning with Why Do Bad Things Happens to Good People?

Second question: Why doesn't God do something?

The first Christians who received Peter’s letter were asking this question: “Why doesn’t God do something about these bad things that are happening to us and rising up within us?” I couldn’t help but think about them and their question as I read the news about Christians being tortured and murdered throughout much of our world. One report on Fox News says upwards of 90,000 Christians died in 2016.

What does Peter say to them and us? Let’s go to verse 20, where Peter writes about how God “patiently waited in the days of Noah while an ark was being prepared.” He reminds us of how patient God is!

We who struggle with patience may ask why God is so patient with people who can be so bad! Jesus tells us in his conversation with Nicodemus why God never rushes to judgment. During that conversation Jesus tell Nicodemus and us: “For God so loved the world in this way: He gave His One and Only Son. So that everyone (even the worst of the worst people) who believes in Him will not perish but have eternal life.” Jesus adds in verse 17: “For God did not send His Son into the world that He might condemn the world, but that the world might be saved through Him.”

God loves everyone, and doesn’t want to judge and condemn anyone. The Apostle Paul reminds in I Corinthians 13:4 that “love is patient.”

While on the cross Jesus prayed for those responsible for his torturous death: “Father, forgive them for they know not what they do.” They didn’t know what they were doing.

They were not destroying Him; they were destroying themselves. While they were bringing judgment and condemnation down on themselves, God didn’t want that for them!

God never judges and condemns anyone without first giving them every opportunity to confess their sins and change their ways. Let’s revisit verse 20 again: “… God patiently waited in the days of Noah while and ark was being prepared.” He was waiting while Noah not only was building the ark, but doing something else! We read in II Peter 2:5 that Noah was “a preacher of righteousness.”

He was preaching to the people as a prophet, inspired by the Spirit of Christ to proclaim God’s Word, to confront them with their sins, call them to confess their sins, and change their ways before they drowned in their sins and ended up as “spirits in prison.”