I am a Mark Richt fan 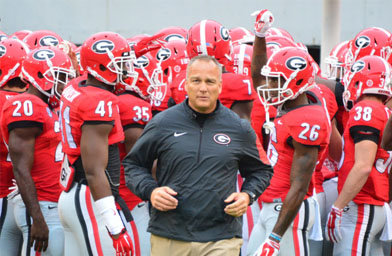 Georgia head coach Mark Richt runs onto the field before the game between the Georgia Bulldogs and the Southern University Jaguars in Athens, Ga., on Saturday, Sept. 26, 2015. Photo by Stephen Colquitt/georgiadogs.com
Posted Monday, November 30, 2015 9:30 am
Gerald Harris

Fellow Georgia Baptist Mark Richt was fired as head coach of the University of Georgia football team on Sunday. I know why he was terminated, or given the opportunity to resign.

It was not because he was not a winning coach. In fact, he has averaged winning 9.5 games a season for 15 years as the head of the UGA football “Dawgs”. His record for his tenure as the head coach of the Bulldogs is 145-51 overall and 83-37 against Southeastern Conference foes.

Richt has six SEC East championships to his credit and has won two SEC championships. In 2002 and 2005 he was voted SEC Coach of the Year. He led Georgia to a 13-2 record against in-state rival Georgia Tech.

Richt was not terminated because he could not recruit quality players. In fact, he consistently had a recruiting class that was one of the best in the nation. Parents of superb athletes welcomed the opportunity for their sons to hone their athletic skills and benefit from the character development provided by the congenial Christian coach at UGA.

Consequently, Richt was not asked to resign because of some character deficiency. He has been regarded as a stalwart Christian from his first day on the Athens campus. Georgia Athletic Director Greg McGarity stated, “Mark has touched thousands of lives over the past 15 years. He has a huge heart and his positive influence has affected many people, young and old.”

“We will never know how many people were positively impacted by a comforting phone call, a sympathetic or uplifting note, an autographed football or photo.”

McGarity added, “Mark’s record on the field was outstanding; however, his impact on college football goes well beyond the gridiron.

“His fingerprints are evident on shaping the lives of children, many of whom attend a Bulldog summer camp or a retreat; they are evident on the prospective student-athletes as they determine what college to attend – whether it be UGA or a competitor, they are evident on his current players, and probably even more so, on those who have lettered and are in the workplace, as fathers and husbands. For those contributions, we are sincerely appreciative.”

So, why is Mark Richt no longer the football coach at the University of Georgia? Have a minority of irate fans to whom football is a religion had their fill of nine-win seasons, because to them only a national championship is their opinion of heaven?

Is Richt no longer the leader of the “Dawg” nation because a smattering of wealthy alumni, who use their millions to bribe and manipulate, threatened to withhold their substantial contributions to the university if the coach is not fired? Of course, we know money talks, but if it did in this case, it spoke foolishly.

Is Richt suddenly on the outside of the UGA football program because there are alumni who think they can get a better coach? Nick Saban is at Alabama and Urban Myer is at Ohio State and it is unlikely that either one of them is leaving. Putting the future of the Bulldog football program into the hands of any other coach that will do better than Richt is probably a dubious speculation.

In my humble and uneducated opinion there are no other coaches who can win as consistently at the University of Georgia as did Mark Richt – and certainly no one who can build character and set an example of Christianity as can the former Georgia coach.