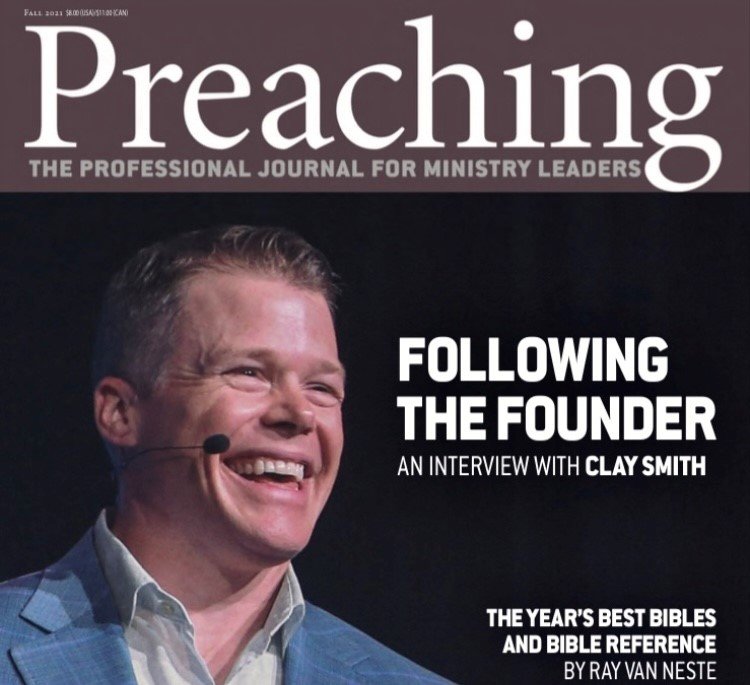 Clay Smith is shown on the cover of the fall issue of Preaching Magazine. 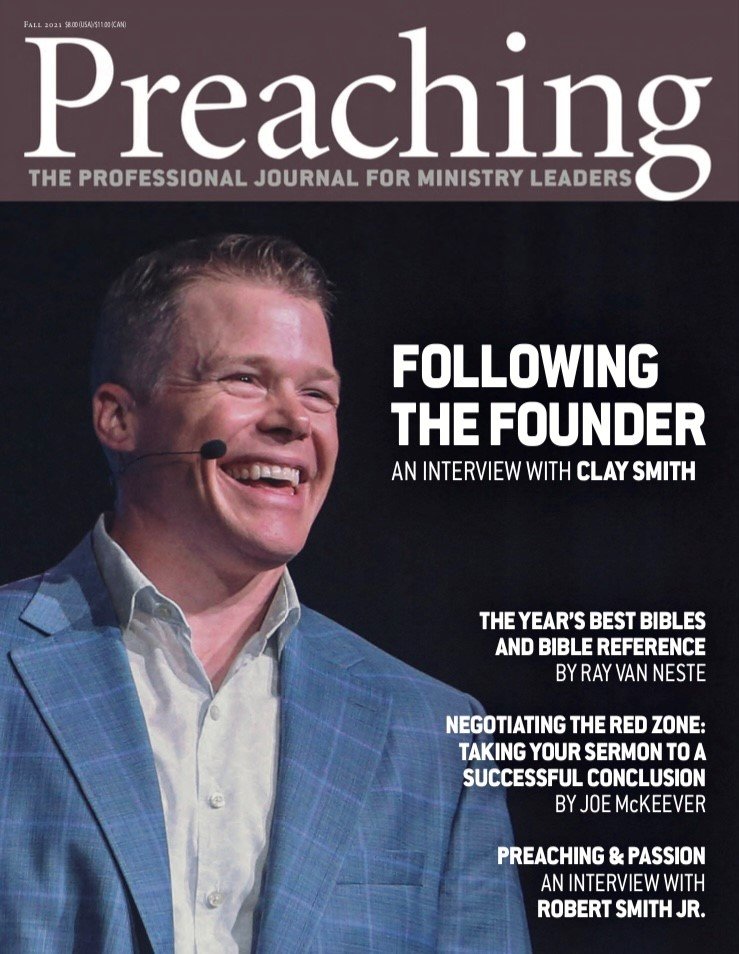 MARIETTA, Ga. – Replacing a legendary pastor in one of Georgia’s premier churches is no easy task.

Clay Smith credits a detailed transition plan with ensuring a smooth transfer of leadership at Johnson Ferry Baptist Church, a megachurch north of Atlanta with Sunday morning attendance of nearly 4,000.

In an interview with Preaching Magazine, Smith talked candidly about the “fear and trepidation” he felt when God called him to follow Bryant Wright as lead pastor at Johnson Ferry in 2019.

“We sat down and just mapped out everything,” Smith said in the cover story for the magazine’s fall edition. “We were going to have a three-month overlap. In that time, we decided that he would lead the staff meetings up to this certain date, and then I would start leading the staff meetings, even with him still in the room.

“The wonderful thing about that overlap was that it allowed Bryant and I to become good friends. I think if he had left, and I came in the next week or two after he left, I would have respected him as a man and as one who God used to build a great church, but I would not have known him. What that overlap time allowed us to do is to become great friends. Even now, we talk regularly. We text often.”

In the interview, Smith told the magazine about a statement he had made in his first sermon at Johnson Ferry about following the church’s beloved founding pastor:

“I said, ‘Honestly, I’m not here to fill his shoes; I’m here to fill my shoes.’ I think it’s important that when you come into a role like this that you’re comfortable in who you are, who God has called you to be. My job is not to somehow become who they had; I’m supposed to be the best version of me. I think that’s so, so important – to make sure that you realize God called you to be here and you need to be who He has gifted you and called you to be.”

Preaching Magazine, which is read primarily by pastors, delved into the art of preaching, a topic that average churchgoers give little thought to. The magazine quizzed Smith in intricate detail about his approach to preaching, including how far ahead he plans his sermons (six months to a year) and how long his sermons are (about 35 minutes).

“I know for me, a 35-minute sermon is almost always better than a 50-minute sermon,” Smith said. “I ask our media guys to give me a countdown clock. … It starts at 30, so the whole sermon I’m watching the clock plummet to zero. Once it gets to zero, it actually turns red, so it’s like: Brother, you need to land this plane right now. I like that.”

When the clock reaches zero, Smith said he may take another five or six minutes to wrap up.

“I don’t type out a full manuscript word for word, but it’s a fairly detailed manuscript,” he said. “There’s one thing that we started during COVID that has been a huge hit: we do fill in the blank sheets for our people and they love that.

“We still do that because it really benefits our people to have fill in the blanks, but the deadline for us to get that produced is by Wednesday night. It forces me, by Wednesday, to have that skeleton outline ready.”

By Thursday or Friday of each week, Smith has an eight- to 10-page sermon manuscript.

“It’s not word for word, but it’s fairly detailed,” he said. “I get up Saturday morning, pretty early, and my goal is to turn that 10-page manuscript into a one-piece-of-paper, front-and-back outline. I highlight the stuff that’s going to be on the screen, so I know what’s going to get projected on the screen and that’s what I carry in into the pulpit.”

Smith doesn’t use a lectern.

“For me, it feels like a barrier between me and the people,” he said. “I literally just get up there with a Bible and walk around the stage. I have my Bible, and I have my front-and-back piece of paper just there with the text. I think what that helps me to do, condensing it down, is really internalize the message. It helps me take that 10-page manuscript and boil it down, distill it down to its most essential parts.”

At one point in his ministry, Smith said he used an iPad for his sermon notes, but he gave that up.

“I just loved the freedom of not being tied to a lot of notes,” he said. “I mean, I’m not going up there unprepared, but it feels a lot more extemporaneous when I’m just carrying a front-and-back piece of paper, so that’s what I do.”

Johnson Ferry, as one of Georgia’s top churches in professions of faith and baptisms, feeds Smith’s heart for evangelism.