Knowing where to draw the line 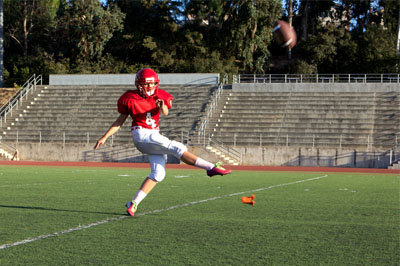 To have an all-area soccer player become a placekicker on a football team is not unusual. It happens all the time. Soccer players are known for kicking for distance and with accuracy.

Many of you will remember Morten Andersen. He grew up in Denmark and played soccer, but when he came to America his high school in Indianapolis did not have soccer, so he started playing football.

In his one year of high school football he was good enough to win an athletic scholarship to Michigan State. He played in the National Football League for 25 years and was affectionately called “The Great Dane.” Spending most of his career with the New Orleans Saints, he also played for the Atlanta Falcons for eight seasons and was inducted into the NFL Hall of Fame this year.

Megan Garth is an all-area soccer player at Prince Avenue Christian School in Bogart, which is part of Prince Avenue Baptist Church. Megan discovered this summer that she is an exceedingly good placekicker. She had kicking sessions with the football coaches at Prince Avenue and discovered she could consistently kick extra points and managed to split the uprights on field goals attempts from 30 yards away with regularity.

However, Megan also discovered that her school would not permit her to play football, because she is a girl. Megan was disappointed that she cannot play for her high school football team, but the school made the right decision.

The Atlanta Journal Constitution quoted Megan’s dad, Branham Garth, as saying, “We’re obviously disappointed and we disagree, but we love Prince Avenue Christian and the people there, and we respect the decision and the deliberation.”

A petition with 300 student signatures was given to the administration in support of Megan’s cause. However, a petition with many names doesn’t overrule what is prudent and right.

Landmark Christian football coach Wayne Brantley, reflecting on Prince Avenue’s decision to deny Megan’s request to play football, commented, “I know that is probably not the politically correct answer, but we have boys’ sports and girls’ sports, and I believe we should stick with that. We would not allow a boy to play girls basketball. Think of what might happen if that can of worms was opened – a 6’7”, 250-pound boy dominating in girls basketball.”

Prince Avenue was right to draw the line where they did. I am sure they took into consideration the potential danger to girls who play football and the logistics of finding an appropriate dressing room for a girl. I suppose they wanted to keep the lines of distinction between boys and girls clear and definitive, because gender matters. I am sure they also realized that if a line is not drawn now, the price of drawing it later would be far more costly and devastating.

I love what Denny Burke says about this issue. Dr. Burk is professor of Biblical Studies at Boyce College, the undergraduate school of Southern Baptist Theological Seminary in Louisville, KY. “I am concerned about parents who would let their little girl play football with boys. But I am even more concerned about parents who would allow their sons to participate. What have we become as a society when parents would cheer their sons to in any way strike or manhandle a girl?

“This goes against everything I am trying to teach my son about the way he is to treat girls. I am to teach him that his responsibility is not merely a passive one – not hitting girls. His responsibility is an active one. It falls to him to be the protector of the girls in his life. Right now that relates chiefly to his three sisters, but it also extends to all little girls. I teach him that while he’s a boy so that he will be that way when he is a man.

“To put my son on the football field and then to tell him to tackle a little girl would go against everything that I am trying to teach him. He would have to ignore his conscience, which I am actively trying to shape so that he will be a self-sacrificial protector of girls. Do we really want train a generation of boys through their playtime activities that it’s okay to pulverize little girls? It will be the unraveling of everything that is decent and good if we do.”