Legislators challenged to be true to their calling

ATLANTA — Nearly 50 legislators and guests gathered high atop the James H. “Sloppy” Floyd Building in downtown Atlanta Jan. 27 to be encouraged, challenged, and affirmed at the 2016 Legislative Prayer Breakfast.

State Missionary Buck Burch, who served as guest speaker for the event, drew his comments from 2 Timothy 2:1-7, focusing on the Apostle Paul’s letter to Timothy so he could experience victory in his ministry.

Burch explained that the apostle used three metaphors – a soldier, an athlete, and a farmer.

“First, Paul chose the Greek work for soldier that means ‘strategist.’ He could have used one of six other words with as varied meanings as ‘stone throwers,’ ‘archers,’ or those in formation who are ready to fight. But he chose ‘strategist’ so Timothy would be challenged to use his mind to plan for victory,” Burch explained. 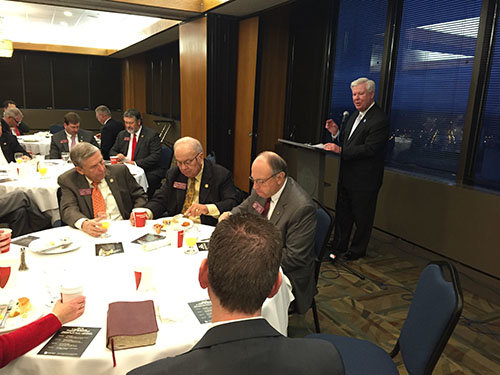 “In the ancient Greek an athlete had to be born in Greece. He had to enter 10 months of strict training and conditioning before entering any competition,” the state missionary added.

Burch then used an example that recently appeared in the news.

Many individuals trained for the Elkmont, AL Half Marathon but the race took a very unusual turn due to a surprise entry – a dog that caught the vision and overcame tremendous odds to complete the course.

The dog, Ludivine, broke away from her owner’s leash and joined the runners and performed so well she was awarded a special ribbon for seventh place. And even more amazing, Burch explained, she would have finished second if she had not been distracted by chasing rabbits along the way. Even more to her credit she placed first in the women’s division.

Ludivine the dog runs with commitment

“Today I am not only praying for you to plan for victory as a soldier, but to play to win the race. An athlete does not enter a competition half-heartedly but with the commitment and determination of Ludivine," he noted.

The third metaphor focused on the word farmer, which, coincidentally, means "Georgian" in the original Greek language.

“Paul noted that a hardworking farmer should be the first to share in the fruit of his crops. Therefore he diligently plants to reap … he plants for a harvest that comes through hard work, not coincidence.”

Burch then related a story from his youth.

“When I was young and it was planting season, my job was to walk behind my Dad’s John Deere tractor and be sure the seeds he was sowing were properly covered with dirt." At the end of the day as they left the field he would sometimes find himself walking in his father’s footsteps through the soft soil.

“I remember one day when my Dad turned around and asked me to stop. In brief, he was telling me he didn’t mind my following in his footsteps but I should plant my own path; I should have a harvest beyond myself.”

Then drawing on the three metaphors, Burch concluded by saying, “Today I am praying for you to plan, play, and plant to reach a harvest in your calling as our legislative leaders.”

The agricultural theme was then continued when White called on Gary Black, state agricultural commissioner and a member of Maysville Baptist Church, to close in prayer. 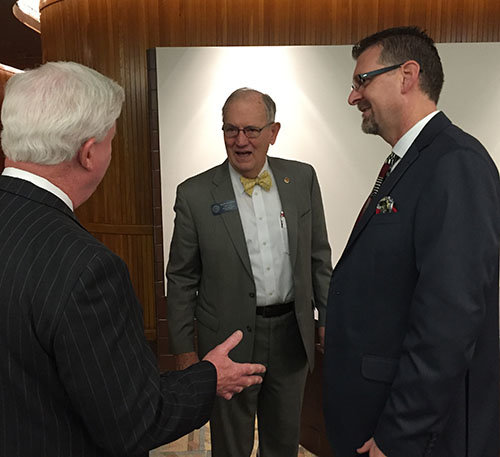 The soft-spoken public servant first addressed his concern over the avian flu and its annual threat to Georgia’s farm families and agricultural economy.

“We have done everything we can imagine to battle this threat but have still not eradicated it. I know what the specialists say through their extensive research but I also know that my Father owns the cattle on a thousand hills and He is going to save us from this danger.”

Then in his prayer he asked God “to deliver Georgia from this influence of avian flu on our people, their livestock, their ability to provide for their families. You may choose to mutate the virus or you may honor our preparation for it.

“But if it invades Georgia I pray that You will protect our farmers and their families from its devastating influence.”