Listen to your spouse 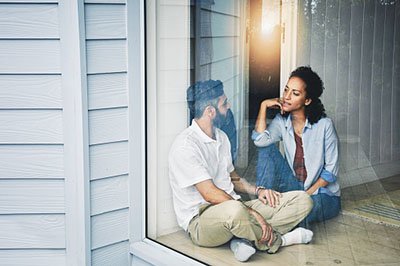 This is the hardest thing to do in the area of communication. Usually we are either preparing our reply when our spouse is talking, or tuning them out altogether. Listening requires intense concentration.

An older couple was walking through the woods one afternoon. The husband turned to his wife and said, “It’s windy isn’t it?” She replied, “No it’s Thursday.” He paused a moment and said, “Me too, let’s get something to drink.” Sometimes neither party listens.

Sometimes silence is the best thing as a story told to me by a friend who was a highway patrolman illustrates. He pulled over a man for speeding on the interstate. As he approached the car he noticed the radio was so loud the car was rocking. When the driver rolled down the window my friend said, “Do you know you were driving 90 miles per hour?” The driver’s wife said, “He always drives fast.” My patrolman friend noticed the driver was not wearing his seat belt. When he asked him about this the wife said, “He never wears his seat belt.” Then my friend said, “How could you hear me with your radio so loud?” Again the wife said, “He always plays it loud.” The driver turned to his wife and shouted, “Will you shut up!” My friend then looked across the car at her and said, “Ma’am, does he always talk to you like that?” She replied, “Nope, only when he’s been drinking!” Sometimes it’s just best not to say anything.

After reading together Prov. 2:2 and Col. 4:6, take a walk with your spouse and just listen to the sounds around you without speaking. When the walk is finished discuss the various sounds you heard. If you can attune your ears to hear the sounds around you, you can listen even more intently to each other.

This series of devotions relating to marriage are taken from “44 Ways to Strengthen Your Marriage” by evangelist and pastor Jerry Drace.