Students from various nationalities participate in the ESL classes offered through a non-profit, faith-based agency in Carrollton. IMPACT WEST GEORGIA/Special
CARROLLTON — For Annette Ingram, it began when she drove by a low-income apartment complex and saw a large sign that said, “Free ESL Classes.” That piqued her interest because she was already certified as an English to Speakers of Other Languages (ESOL) instructor through the State of Florida when she served in the DeSoto County public schools. When she moved to Georgia,  she brought those skills to Carrollton where those abilities were in high demand. Carroll County was seeing the need for a strong literacy program for internationals who were moving into its communities. She was one of the first two instructors hired. But she had never made the connection with using those skills in ministry until she stopped into the apartment complex. She was looking for brochures for the parents of her students who needed to brush up on their English language skills. That’s when she learned about Impact West Georgia, a multifaceted non-profit, faith-based ministry. Today she is an integral part of the Georgia Baptist statewide Literacy Missions network, working in the five public high schools by day and doing ministry by night. It’s the perfect arrangement, she says, because she has the perfect answer to parents of her children who ask if they also qualify for instruction through the school system.

“I tell them unfortunately there is no program for adults … but I know just the place they can attend for free,” and she gives them the address for the Adult Basic Education program at Impact West Georgia. 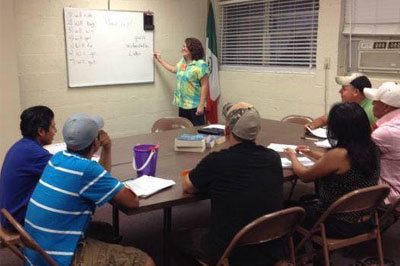 Annette Ingram teaches an adult ESL class at the Impact West Georgia campus in Carrollton. IMPACT WEST GEORGIA/Special
Man
The non-profit, which has a large presence of Baptists from Carrollton Baptist Association, meets a variety of needs ranging from ESL to veterans to homeless to otherwise needy individuals and families. Ingram – who serves as volunteer Region 4 Coordinator for the Mission Board’s Literacy Missions ministry – appreciates the outlet the Georgia Baptist Mission Board provides through its Literacy Missions program and for the annual workshop. This year’s conference will be held Sept. 8-10 at the Georgia Baptist Conference Center in Toccoa. North American Mission Board missionary Kim Carr and her staff from the International Learning Center in Jacksonville, Fla., will return as keynote speaker. Carr has pioneered ESL ministry in Florida.

Over 1,300 professions through Center curriculum

More than 1,300 professions of faith have been registered through the Center’s 17 years of existence, along with more than 80 church plants. The approach  seeks to fast-track the learning experience, equipping students to become proficient in English in five years. Carr’s updated and streamlined approach was featured in this year’s Annie Armstrong Easter Offering for Home Missions and on Baptist Press. 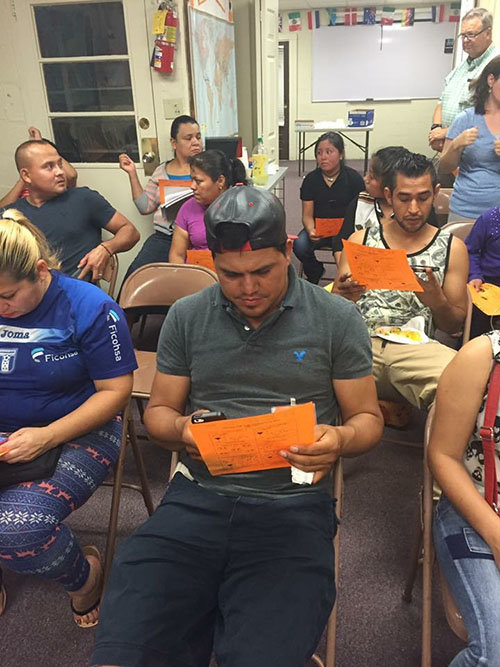 An adult student scans a homework assignment through Antioch Baptist Church's ESL program. IMPACT WEST GEORGIA/Special
“The ILC teaches English as a Second Language, scripture-based reading, and citizenship. What we really hope and pray to do is impact their lives for Christ,” Carr says. State Missionary Paulette DeHart, who oversees Georgia Baptists’ Literacy Missions program, says Carr has much to share about shortcuts to literacy without sacrificing quality for the students. “We want to learn from what Kim is doing with refugees in Jacksonville and how we can incorporate her methodology in Georgia, as appropriate,” she added. The ILC sessions are not meant to replace what ESL leaders are doing in Georgia but to undergird their ministry. If there are techniques that will strengthen a ministry, Georgia ESL volunteers are encouraged to use them as they see fit. “We need to be more spiritually productive; the ILC curriculum will help us with that goal,” she added. The Toccoa weekend features training for three major workshops: Breakout modules will include citizenship classes for individuals in the U.S. legally, but who need help preparing for the exam and interview. Arise to Read, begun by Donna Gaines, wife of Southern Baptist Convention President Steve Gaines and pastor of Bellevue Baptist Church in suburban Memphis, TN, will also be introduced to those interested in children’s tutoring. The approach is being taken nationally by NAMB. The outreach sends volunteers into public schools to identify children who are struggling and offering one-on-one tutoring. “Just a half-hour a week of personal instruction has shown to have tremendous impact on the child and her self-esteem,” DeHart noted. 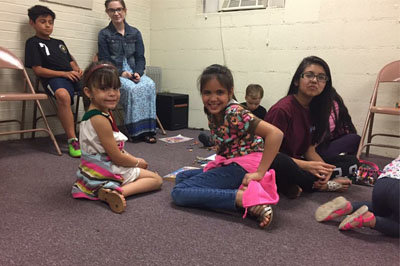 Childcare is provided for children as their parents increase their English proficiency in ESL classes. IMPACT WEST GEORGIA/Special
The tutoring focuses on second graders because that is the most pivotal point in a child’s ability to learn. The instruction builds confidence and a solid foundation in the child’s life. By the time the child reaches fourth grade she has to take state tests for content reading and if she fails, her ability to catch up is greatly hampered. Failure of the exam is so important that Arizona, California, Texas, and Florida look at fourth grade reading scores to determine how many prison cells they will need in the next decade. Indiana looks to second grade levels to make that determination. “Those facts are very indicative of what will happen in society in just 10 years because of what happens in the classroom today,” DeHart said. And that is why it is so important for Georgia Baptists to be on the front lines of working to lower the state’s incarceration levels while sharing the Good News with the next generation.

Registration is now underway at www.mytoccoa.com/literacy. Affordable costs range from those sharing a room to individuals preferring private accommodations. Commuter rates are also available for those within an easy drive. While walk-ins are accepted until the final day, preregistration is encouraged to be sure a name tag, room key, and other incidentals are waiting for them. Mary Ann Leverett, who attends First Baptist Church of Barnesville, is among those looking forward to the annual meeting. She has been involved in Literacy Missions since 2000 and has rarely missed the gathering. “I love the interactions with people from all over the state, the networking and learning what is working and what isn’t,” she says. She primarily teaches ESL to Hispanics from several Latin America countries, but has recently expanded that ministry to families from Vietnam. Last year she included a child from India and a family from Nepal. Leverett, who serves as Region 7 Coordinator for Georgia Baptists, helped the father gain citizenship last year and is now helping the mother on that journey. “I would not miss this conference,” she says. “The additional information I receive and the updated approaches are priceless. It’s also inspirational to learn about work across the entire state and learn from the common struggles we all have. “In 1976 the Southern Baptist Convention adopted an overarching goal to pray, give, and work so that ‘every person in the world shall have the opportunity to hear the gospel of Christ in the next 25 years.’ That challenge eventually became known as Bold Mission Thrust. “We failed miserably,” she says with a slight yet serious chuckle. “But God is giving us a second chance now by bringing the world to us. Literacy Missions is an important part of that plan and Georgia Baptists are at the forefront of that calling.”