'Magical' times of ministry for Sons of Jubal in Israel

David’s Citadel served a beautiful setting for an evening concert near the Jaffa Gate entrance into the Old City of Jerusalem. It was one of several locations a team of Georgia Baptists sang at while in Israel in October. EDDY OLIVER/GBC
Posted Monday, December 7, 2015 8:55 am
The Christian Index

David’s Citadel served a beautiful setting for an evening concert near the Jaffa Gate entrance into the Old City of Jerusalem. It was one of several locations a team of Georgia Baptists sang at while in Israel in October. EDDY OLIVER/GBC[/caption] By Eddy Oliver, state missionary GBC Music and Worship Ministries Almost 300 Georgia Baptists took a trip to the Holy Land in October to share a message of hope, peace, and the love of Christ with the Israeli people. As part of a tour that included the Sons of Jubal (SOJ) men’s chorus, the group sang and walked where much of Jesus’ ministry took place in places like Tiberius, Bethlehem, and Nazareth. About half of the group included pastors, spouses, and laypeople from churches across Georgia hosted by GBC Executive Director J. Robert White, who presented inspirational messages at the end of each concert. Some of the worst violence seen in Jerusalem and Bethlehem in the last couple of decades was taking place during the time, but the group was “not shy about proclaiming the Gospel and the reality that there is no peace without Christ as Lord and Savior,” White commented in a recent Index column. “With killings taking place in the streets on a daily basis, we felt the power of your prayers for which we are so very grateful and we felt the protective hand of the Lord as we proceeded with our schedule of concerts and movement among the significant sites in the Holy Land,” he said. 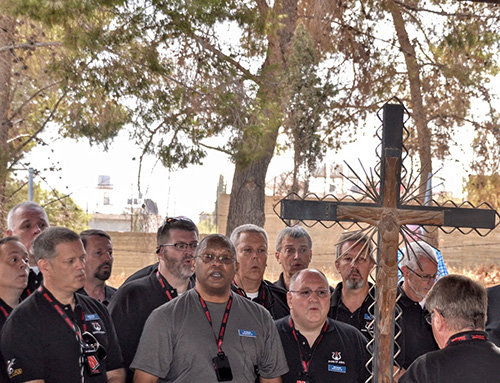 The JubalTones ensemble sings during a concert at the Shepherd’s Field, east of Jerusalem. It is the place where shepherds “kept watch over their flock,” and an angel announced the birth of Jesus. EDDY OLIVER/GBC[/caption]

Following one of the concerts at the David’s Citadel in the Old City of Jerusalem, the Citadel’s head of international relations, Caroline Shapiro-Weiss, said, “We’ve had a magical evening of song and praise and prayer from the Singing Men of Georgia, who despite the situation, I would venture to say, brought Christmas early to Jerusalem.” About 600 students from three Christian high schools gathered to hear the SOJ at the St. Joseph School auditorium in Nazareth for the first collaborative event of this type in recent history. One of the schools included was Nazareth Baptist School, which has ties to the International Mission Board and local evangelical churches in the area. The SOJ did a total of eight concerts in addition to sightseeing in Tiberius, Bethlehem, and Jerusalem. About 100 of the group stayed an extra two days to tour sites in Jordan. The concert at Bethlehem Convention Center was broadcast on Israeli television and drew many believers as well as Muslims. The SOJ was one of the only non-Catholic groups to ever sing in the Basilica of the Annunciation in Nazareth. Then-Convention President Don Hattaway, who is a SOJ member and pastor of Tabernacle Baptist in Cartersville, has been to the Holy Land several times and preached a number of messages during the trip. He was so moved during the singing of “Washed Away,” that he had to leave his seat in the back row to meditate on God’s greatness and thank Him for His grace and mercy. “I will never forget that experience,” Hattaway said, “because this is where Jesus showed his love and grace.” He said it was a great opportunity to get to know many other Georgia Baptists as well. “Our trip was a blessing in many ways. It allowed us the joy of sharing the Gospel of Christ and the response to our concerts was overwhelming,” said Jon Duncan, state missionary/specialist in Music and Worship Ministries and conductor of the SOJ. “Even though political tensions were rising, we never felt threatened as God’s hand was upon us, “ he said. Danny Stubbs, minister of music at Houston Lake Baptist in Perry, said, “I am so thankful to be a part of a monumental work of God in the Holy Land. I have been like a boy at Christmas – I have wept, I have been silent in awe, and I have voiced my praise.” 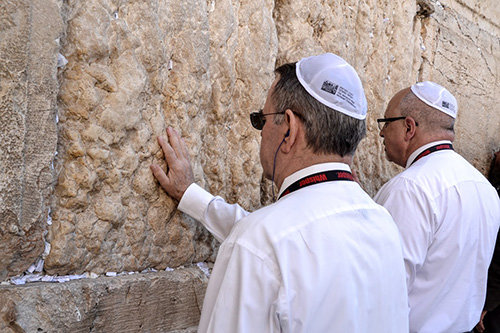 Steve Hamlin of Rhine Baptist and Keith Chandler, state missionary in Music and Worship Ministries, bring petitions to the Western Wailing Wall in the Old City of Jerusalem. EDDY OLIVER/GBC

“I am still reeling from all I saw in the Holy Land,” commented Thom Barker, an SOJ member from Social Circle. He noted that the struggles between the Jews and Arabs is very real and dates back to Isaac and Ishmael. In fact, the number of Christians is becoming fewer and fewer in Palestine, where Bethlehem is found. Only 2.1% of all Israel are believers, according to the CIA Israel Factbook. The concert at David’s Citadel (below) was recorded and can be viewed at the Georgia Baptist Convention Vimeo channel. Commenting on the video, one person who is an Israeli living in Georgia, said “May I say a heartfelt thanks for your performance in Jerusalem at this difficult time in Israel. Sometimes Israelis feel that the world does not care, but you prove that there are good folks like you who do. Thank you and Shalom.” 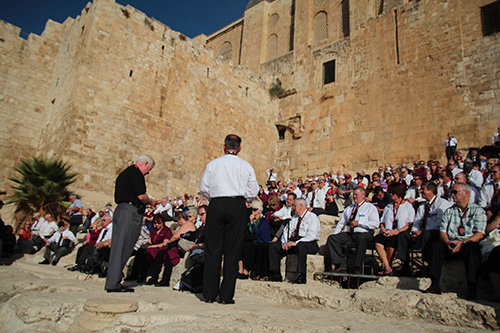 J. Robert White and Jon Duncan led the group of 300 in a worship time on the southern steps of the Temple Wall, where it is believed that Christ often taught while he was in Jerusalem. EDDY OLIVER/GBC 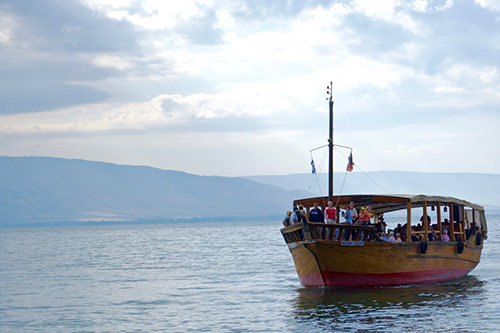 The group takes a boat excursion out in the Sea of Galilee. EDDY OLIVER/GBC 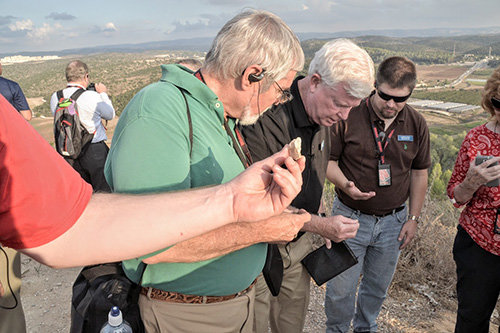 At the Valley of Elah, several picked up smooth stones where the battle between David and Goliath took place. J. Robert White, center, looks at one as Aaron Quick, left, of Gum Branch Baptist in Hinesville and Louis Batson of First Baptist of Lilburn observe. EDDY OLIVER/GBC 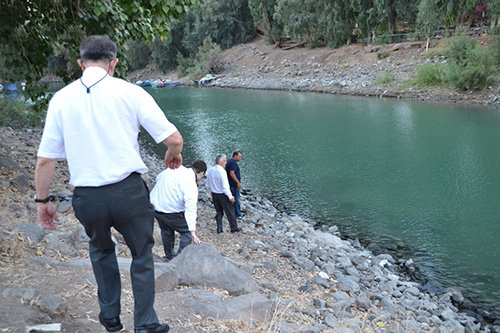 Several walk to the Jordan River, where Jesus was baptized. EDDY OLIVER/GBC 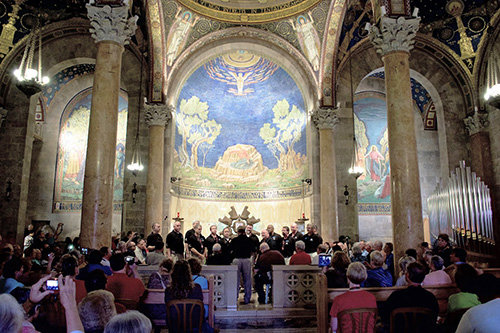 The JubalTones ensemble sings during a concert at the Basilica of the Annunciation in Nazareth. EDDY OLIVER/GBC 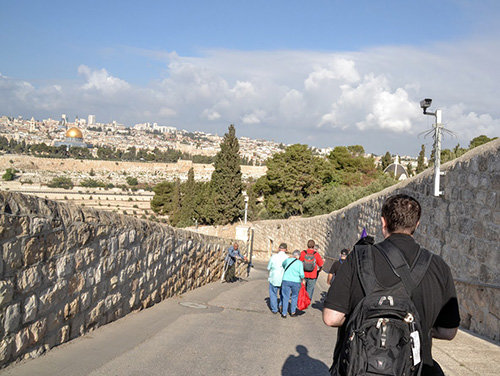 The group had the opportunity to walk the Via Dolorosa in Jerusalem, where Jesus walked on the path to His crucifixion. EDDY OLIVER/GBC