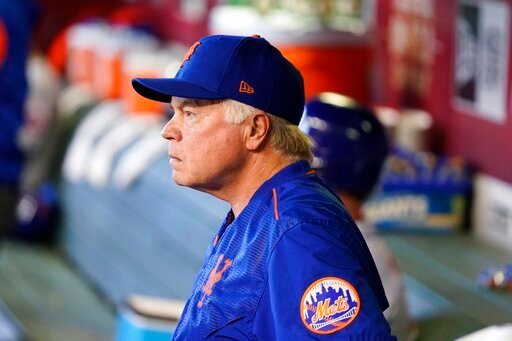 López, optioned to Triple-A Syracuse following Sunday night's victory, received a three-game ban that starts whenever he returns to the active big league roster. If he appeals, the penalty would be delayed until the process is completed.

Michael Hill, baseball's Senior Vice President for On-Field Operations, announced the discipline about 20 minutes before the first pitch of New York's game against World Series champion Atlanta at Citi Field — the initial meeting this season between the NL East rivals.

In his first season with the team, Showalter had guided the Mets to a 16-7 record — best in the National League — heading into Monday night.

Showalter was suspended for one game and fined. López also was fined an undisclosed amount by the commissioner's office “for intentionally throwing pitches” at Schwarber in the ninth inning of New York's 10-6 win Sunday night.

Mets star Francisco Lindor had been hit in the thigh by a 93 mph pitch from Phillies reliever Cristopher Sánchez in the eighth. The next inning, an inside pitch from López to Schwarber prompted umpires to warn both teams.

Schwarber eventually grounded out. López then plunked Alec Bohm with a 1-2 changeup, but was not ejected.

López also wound up at the center of a dustup during his Mets debut last week in St. Louis when he threw high and tight to Cardinals star Nolan Arenado after New York infielder J.D. Davis was drilled by a pitch in the ankle.

Mets batters have been hit by pitches a major league-leading 20 times this season, drawing the ire of Showalter and several players.