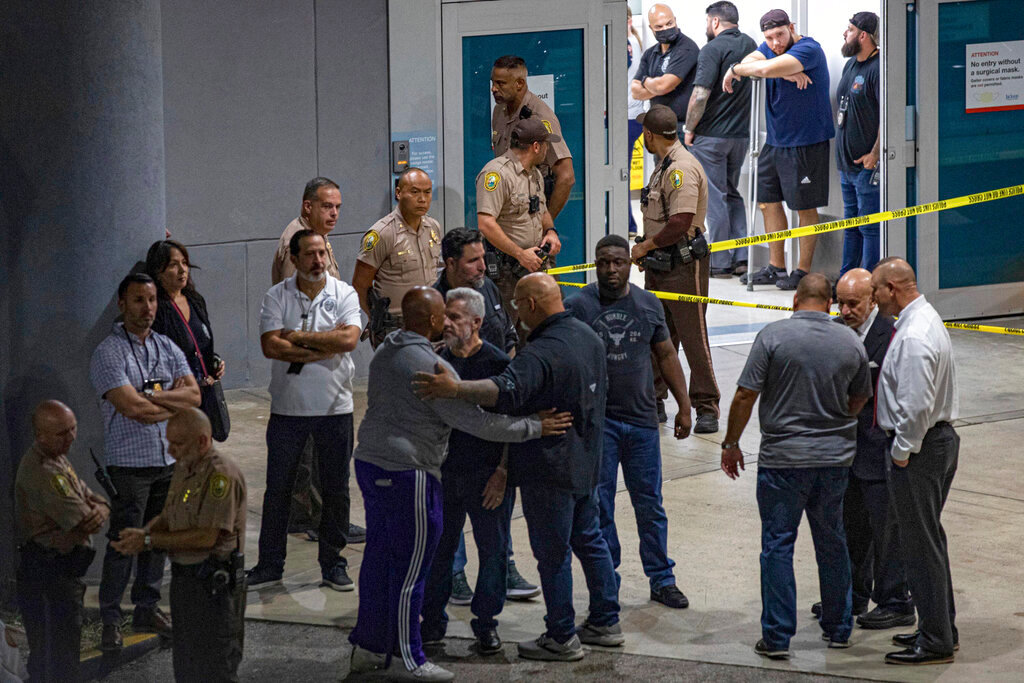 Police officers and other officials stand outside the Ryder Trauma Center after a Miami-Dade police officer was shot in an exchange of gunfire during a car chase with an armed robbery suspect, Monday, Aug. 15, 2022, in Miami. (Sydney Walsh/Miami Herald via AP)
Posted Wednesday, August 17, 2022 1:44 pm

MIAMI (AP) — A 29-year-old police officer who was shot in the head while trying to stop a robbery suspect in Miami has died, officials said.

Det. Cesar Echaverry was shot Monday night as he and other officers closed in on a suspect wanted for an earlier robbery in nearby Broward County, police said. His family had remained by his side at Miami’s Jackson Memorial Hospital.

“Officer Echaverry died in the line of duty while serving & protecting our community,” Miami-Dade Police Director Alfredo Ramirez tweeted Wednesday evening. “Our law enforcement family will continue to stand beside & support the Echaverry family through this difficult time.”

Police said Echavarry and other officers began pursuing a white vehicle involved in an earlier armed robbery when its driver tried to flee, ramming into police vehicles and a civilian vehicle whose three occupants were hospitalized in stable condition.

He then tried to escape on foot, but a confrontation and gunfire ensued. The driver, identified as Jeremy Horton, 32, of Acworth, Georgia, was shot and died at the scene.

Horton had been stopped in South Florida on Aug. 8 and cited for having no proof of insurance and driving with an expired tag and a suspended Georgia driver's license, according to Golden Beach Police Chief Rudy Herbello.

Echaverry had been with Miami-Dade Police for five years, and was assigned to the department's robbery intervention detail. His friends told the Miami Herald he was moving up and planned to get married.