Mike Stone, pastor of Emmanuel Baptist Church in Blackshear, addresses Georgia Baptists shortly after being announced the new president of the Georgia Baptist Convention at the 2017 annual meeting at North Metro First Baptist Church in Lawrenceville. In his comments Stone called for a greater unity among Georgia Baptists in reaching the lost for Christ in the state. Pictured at left is Stone's wife, Andrea, while standing in back is outgoing GBC President Thomas Hammond, pastor of Alpharetta First Baptist. SCOTT BARKLEY/Index
Posted Wednesday, November 15, 2017 2:12 pm
Gerald Harris

Mike Stone, pastor of Emmanuel Baptist Church in Blackshear, addresses Georgia Baptists shortly after being announced as the new president of the Georgia Baptist Convention at the 2017 annual meeting at North Metro First Baptist Church in Lawrenceville. In his comments Stone called for a greater unity among Georgia Baptists in reaching the lost for Christ in the state. Pictured at left is Stone's wife, Andrea, while standing in back is outgoing GBC President Thomas Hammond, pastor of Alpharetta First Baptist. SCOTT BARKLEY/Index

LAWRENCEVILLE — The election of officers at the Georgia Baptist Convention meeting always draws a lot of attention and the corridors and exhibit areas were nearly empty when it came time for the nomination speeches. Messengers swarmed into the church’s spacious worship center to participate in what has essentially become a biennial presidential election.

During his 15-year pastorate at Emmanuel, the new president has led his church in a remarkable way. According to Don Hattaway, pastor of Tabernacle Baptist Church in Cartersville, who announced Stone’s candidacy on The Christian Index website September 27 and nominated him Tuesday afternoon, Emmanuel’s Sunday morning worship attendance now averages over 1,000 and undesignated receipts have increased from $525.000 to just over $2 million.

The newly elected president has served Georgia Baptists in a multitude of ways and for the past two years been the chairman of the Georgia Baptist Convention Executive Committee,. He will relinquish that role when a new chairman is elected at the December meeting.

Upon being announced as the new president Stone declared that he wanted to lead Georgia Baptists to focus on “winning Georgia [to Christ] together.” Mike Stone and his wife, Andrea, have four children: Michaela, Andrew, Sarah, and Matthew. 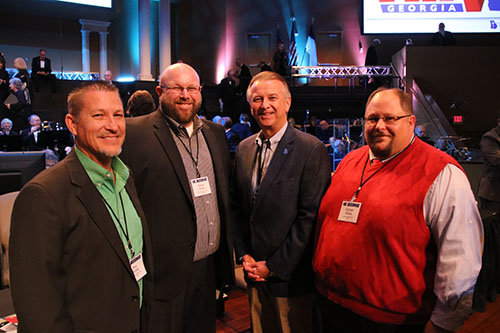 Fred Lodge, also a worthy presidential candidate and a highly-respected Georgia Baptist leader, is known as a gifted preacher and teacher and pastors a church that gives 18 percent of its undesignated receipts to the Cooperative Program. Lodge has a record of mentoring young men. He and his wife, Valeria, have three sons, all of whom are in the ministry.