Ministers' wives pray for one another at luncheon 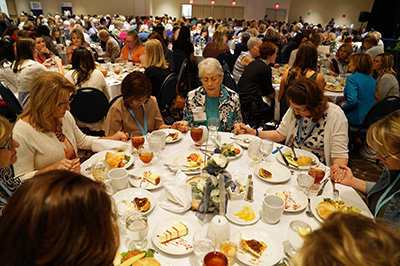 BIRMINGHAM (BP) – Nearly 800 ministers' wives benefited from the quick thinking – and prayer – of this year's Ministers' Wives Luncheon president, Kim Hamm, and her team of officers. 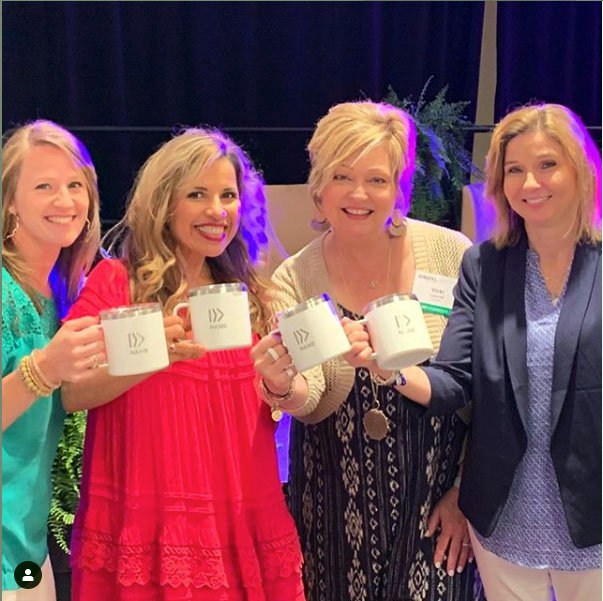 Liliana Lewis, pastor's wife at Roswell Street Baptist Church in Marietta poses with other officers of the 2019 Ministers' Wives Luncheon, showcasing the gift from the North American Mission Board that each lady in attendance received. INSTAGRAM

Just the day before, they were confronted with the news that, due to unforeseen circumstances, their planned speaker, Lauren Chandler, would not be present. Chandler is the wife of Matt Chandler, lead pastor at The Village Church in Dallas.

Instead of being distraught, Hamm recounted, the team prayed and sensed the Lord's direction to invite luncheon attendees to pray for and with each other. Their quick obedience ultimately led to what was described as a sweet outpouring of the Holy Spirit as ministers' wives across the room prayed and opened their hearts with one another on topics led by each of this year's officers.

From the platform, punctuated by special music, each officer shared personal testimonies of God's faithfulness followed by the specific items for prayer.

Liliana Lewis of Marietta, Georgia, the group's vice president, pointed to the biblical story of Mary and Martha, noting that Mary chose what was best – to sit at the feet of Jesus and focus on His Word.

"Many times, we dream about what we're going to pray for our children, but if we take God's Word, the treasure of God's Word, we won't ask amiss. We can pray on point," Lewis said, citing James 4:3 and urging women to pray Scriptures together over their families and their churches.

Hamm, of Gardendale, Alabama, invited women to pray for each other's individual churches, husbands, areas of ministry, and for the SBC annual meeting.

Ministers' Wives Luncheon president Kim Hamm led attendees to pray for one another after the event's scheduled speaker was unable to attend. "The devil wanted to cause confusion among our women," Hamm said later, "but instead it became a blessing and great unity." ADAM COVINGTON/BP

Corresponding secretary Vicki Leavell of Millington, Tennessee, shared about a health crisis she experienced four months prior to the luncheon.

"I woke up in the middle of the night and I thought I was having a heart attack. My husband rushed me to the ER. And after two weeks in the hospital, they determined that possibly a random virus had attacked the sac around my heart, filling it with 80 percent of fluid," she recounted, explaining that her body started attacking itself.

As she struggled for each breath, she also struggled with fear, both of which the Lord has been healing in her life, she said. She invited women in the room to pray for those who are facing health issues.

In the last segment, recording secretary/treasurer Brigitte Harrison of Apex, North Carolina, shared how during one of her pregnancies "doctors were telling us that our precious son had major challenges and the chances of him surviving were very slim. We needed a miracle."

She recounted writing in her journal, "OK, Lord, this child is Yours, and I choose today to trust You with him." Her son was born the very next morning, and the morning after that, the Lord took him home.

"I don't know what you're facing, but I do know this. We have a real enemy, and he would love nothing more than to isolate you in your worry, to silence you in your fear, to cause bitterness or anger to seep into your heart. You may even find that you're running from the things of God," Harrison said, urging the ministers' wives to pray about each other's hard times.

She reminded, "We have a God who loves you deeply, who created you as His masterpiece, who has called you out, who has set you apart, who has plans that are perfect for you. And if you will say yes, if you will continue to trust Him in those hard places, He will do the great and mighty things that only He can do."

Hamm reported after the luncheon, "My team and I have heard from many women about how they were able to minister to each other at their tables. That's how I know that the Lord was in control and that the Holy Spirit was really moving in the room yesterday. The devil wanted to cause confusion among our women, but instead it became a blessing and great unity."

Also during the luncheon, author, educator and Bible teacher Donna Gaines was honored with the 2019 Willie Turner Dawson Award, which recognizes a minister's wife for making a distinct denominational contribution beyond the local church and for her Christian character and service to others.

Presenting the award to Gaines, who is the wife of Bellevue Baptist Church senior pastor Steve Gaines, Mary Cox of Lawrenceville, Ga., described what the award represents: "It's about a woman who has godly character, who has served the Lord alongside her husband, and has been a great example as a minister's wife."

Gaines is the president and the founder of ARISE2Read, a nonprofit focused on breaking the poverty cycle through the gospel of Jesus Christ and education.

SBF has chosen GuideStone Financial Resources as the investment manager, and full disclosure has been made in the final report regarding the selection by SBF of GuideStone and of the relationship of committee member Susie Hawkins as the wife of GuideStone President and CEO O.S. Hawkins.

The first motion acknowledged the full disclosure by the current trustees of accounting regarding the endowment fund. Accordingly, Whitten reported the association's current assets as $353,543.33, after disbursement of $37,491.10 to the law firm of Joseph L. Vaughn Jr. for representation from Aug. 4, 2017, to May 23, 2019.

Both motions were unanimously approved during the luncheon's short business meeting.

Next year's luncheon speaker will be Whitney Capps, national speaker for Proverbs 31 Ministries and a writer for the Bible app First 5, reaching more than 1 million people daily. The theme for the June 9 luncheon is "Jesus Changes Everything."

Shannon Baker is director of communications for the Baptist Resource Network of Pennsylvania/South Jersey.