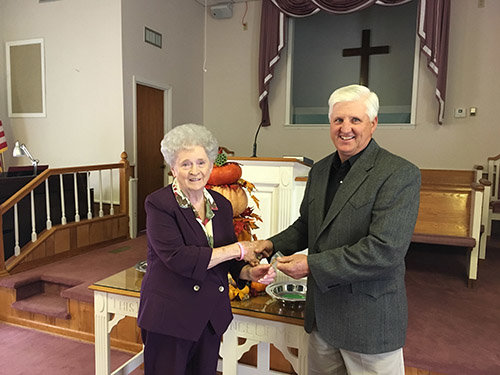 UNADILLA — On Nov. 12, Edith Peavy, age 80, received a perfect attendance pin for having not missed a Sunday in Bible Study for the past 50 years. That is a record almost unheard-of today. Edith is bucking a trend that is disturbing beyond description.

Church attendance is on the decline in America. The casual observer may have already discerned that by what is apparent in his/her own church.

While some research groups contend that as many as 39 percent of Americans are in church on any given Sunday, The Journal for the Scientific Study of Religion has concluded that there is a vast difference between what people tell pollsters and what people actually do. Americans, the journal said, tend to over-report socially desirable behavior like voting and attending church and under-report socially undesirably behavior like drinking.

Kelly Shattuck, reporting for ChurchLeaders.com, contends that in 2004 only 17.7 percent of the population attended a Christian church on any given Sunday in America. There are other survey groups beginning to see the validity of the lower percentage figures.

David Murrow, author and professional speaker, wrote an article entitled “Why is church attendance declining – even among committed Christians?” He stated, “I recently interviewed the leaders of a large church in Arizona. They surveyed their young families and discovered they attended church an average of 1.6 times per month (out of a possible 4.3 weekends/month). In addition, only 20 percent of their members attend at least three times a month.”

The point is clear. The secularization of America is having a devastating affect upon the church, including not only evangelism and giving, but church attendance.

However, let’s get back to Edith Peavy.

Every time the doors are open, wherever she is

Since 1967 Edith has been in Sunday School every time the doors opened. In rainstorms and sunshine, in sickness and health, for better or worse Edith has been in her place during the Bible study hour. She has been mostly healthy during the past half century, but even when it became necessary for her to be admitted to the hospital, she would schedule her hospitalization so as not to interfere with her presence in church on Sunday morning.

Joe Daniel, pastor of Harmony Baptist Church, explained, “Miss Edith is a sweet lady with a delightful personality. She loves the Lord and would do anything for anybody. She is a godly woman and has godly children.”

Edith and her husband, Virgil, have been married for 61 years. Their sons, Jesse and Mike, are devoted Christians. Mike is pastor of Gratis Church in Monroe, where his son, Caleb, is the worship pastor. Jesse is a deacon at First Baptist Church in Cochran.

Virgil’s physical condition would not permit him to maintain the consistency achieved by Edith. But like the indomitable American postman, of whom it has been said, “Neither snow nor rain nor heat nor gloom of night stays these couriers from the swift completion of their appointed rounds,” Edith Peavy has been steadfast in her commitment to her Sunday School. And, she has inspired Georgia Baptists to be more faithful in attendance to the corporate study of God’s Word.