Martin Luther King Jr. addresses a crowd from the steps of the Lincoln Memorial where he delivered his famous, “I Have a Dream,” speech during the Aug. 28, 1963, march on Washington, D.C. Wikipedia
Posted Friday, January 15, 2016 4:35 pm
The Christian Index

Martin Luther King Jr. addresses a crowd from the steps of the Lincoln Memorial where he delivered his famous, “I Have a Dream,” speech during the Aug. 28, 1963, march on Washington, D.C. Wikipedia[/caption]

MONTGOMERY, AL (BP) — Sixty years ago, the Montgomery Bus Boycott famously catapulted Martin Luther King Jr. to national leadership of the civil rights movement and led to the end of segregated public transportation in Alabama. Less commonly known is that the boycott occasioned advice to pastors by King that some Southern Baptists say they still take to heart.

King, in this 1958 book Stride Toward Freedom, recounted the struggle in Montgomery, then asked, "Where do we go from here?" Pastors, he concluded, were an important part of the answer.

"The important thing is for every minister to dedicate himself to the Christian ideal of brotherhood, and be sure he is doing something positive to implement it," wrote King, then pastor of Montgomery's Dexter Avenue Baptist Church. "He must never allow the theory that it is better to remain quiet and help the cause to become a rationalization for doing nothing. Many ministers can do much more than they are doing and still hold their congregations."

Wolf said King's call for pastors to be "moral and spiritual guardians within a community" remains "a compelling standard for a pastor's ministry."

The Montgomery Bus Boycott began Dec. 1, 1955, when African American seamstress Rosa Parks refused to give up her seat to a white man on a crowded bus and subsequently was arrested for failing to obey the driver's seat assignments. The arrest sparked a year-long boycott of city buses by blacks that ended Dec. 20, 1956, when a U.S. Supreme Court order took effect declaring segregated buses unconstitutional.

Reflecting on next steps following the boycott, King said some pastors are called to preach so boldly against racism that they may face persecution. He lamented that during the boycott, "the white ministers, from whom I had naively expected so much, gave so little" despite the fact that "racial segregation is a blatant denial of the unity which we have in Christ."

"Today we are 52 years after the abolition of the Jim Crow laws and our churches continue to experience segregation weekly," Turner, a former president of the Southern Baptists of Texas Convention, said in written comments. White pastors must preach "to convert any prejudiced hearts that possibly exist within their congregations while black pastors have to preach against racism to comfort their congregations from the evils of racism they experience weekly."

Although the United States no longer makes blacks second-class citizens by law, Turner said, "America has ... perpetuated the shame of racism by not teaching every person to love every people group as their own and has kept the races divided. The process of integrating the church must be intentional."

During the 1955-56 boycott, few Southern Baptists were proactive in seeking to integrate their churches.

Leon Macon, then editor of The Alabama Baptist newsjournal, wrote on May 3, 1956, "As for our churches, the present segregated conditions were brought about by the expressed desire and wish of our colored brethren." Any move to integrate the South's social institutions should occur gradually and not "through sudden decisions and acts," which "would cause violent repercussions." 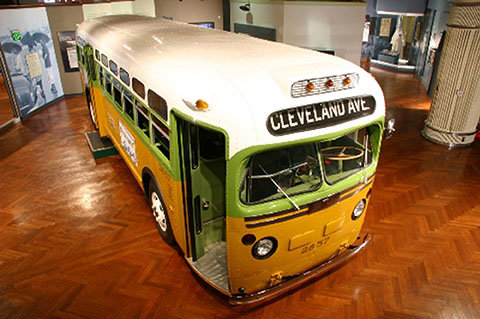 Rosa Parks Bus Courtesy of the collections of the Henry Ford Museum at www.thehenryford.org.

A 1956 report from Alabama's Christian Life Commission noting the ongoing bus boycott criticized both the National Association for the Advancement of Colored People and pro-segregation White Citizens Councils as "extreme groups."

The report, adopted by the state convention, said outlawing segregation was not the answer to racial strife and advised "the more independent negro ministers to meet with their neighboring white minister to discuss ways and means of eliminating the untoward tension." Heated rhetoric on both sides without a moderate middle ground, the report said, was pushing white Christians to align themselves with extreme viewpoints.

W.A. Criswell, then pastor of First Baptist Church in Dallas, is an apparent case in point. During the Montgomery Bus Boycott's third month, Criswell told the South Carolina Baptist Convention's evangelism conference he was astonished at ministers "whose forebears and predecessors were martyrs and were burned at the stake" but who themselves refused to speak about "this thing of integration," a message he later called “a colossal blunder and mistake on my part.”

In his address, Criswell said mandatory desegregation was "a denial of all we believe in." Those in favor of government-mandated integration were "a bunch of infidels dying from the neck up."

At the invitation of South Carolina's governor, Criswell delivered a modified version of the same address before the state legislature the next day, according to news reports.

In a 1973 interview, Criswell said the heated segregationist rhetoric he used at the time "did not represent my heart." Criswell said he became caught up in the moment because he "just seethed on the inside when those people up there tell us how to solve racial problems."

The heated rhetoric eventually gave way to a change of tone. In 1968, Criswell preached a sermon embracing racial integration at First Baptist Dallas, a message he said was symptomatic of "an about face" in his manner of speaking, though his "soul and attitude" remained constant.

Criswell, who was elected Southern Baptist Convention president in 1968, told the SBC Executive Committee that year, "I've never had a battle in my heart ... as I have these last several years. Nobody on earth knew that was going on in my soul. And I came to the firm conclusion that I had to change."

Rick Lance, current executive director of the Alabama Baptist State Board of Missions, was only five when the Montgomery Bus Boycott took place. In a 2013 interview with SBC LIFE, he recalled an African American church bombing in his hometown of Birmingham seven years later. Four African American students about his then-age of 12 were murdered while at church. "What happened in 1963 made an indelible impression on me,” he said.

"Early on in my ministry, I tried to lead my churches to open their doors to all people," he said. "Some resistance remained to such efforts, but in the main, my church families began to see people as individuals of worth created in the image of God. They became more receptive to people from all backgrounds and all walks of life. This was no small victory for Southern Baptist churches in the Deep South."

Wolf told BP that First Baptist Montgomery eventually integrated despite some disagreements among the congregation over admitting African Americans, and Wolf has participated in prayer gatherings involving black and white ministers in Montgomery.

A church that does not speak against racism loses its moral and spiritual authority within its community, Wolf said, and likely will not be effective in evangelism.

"A great detractor from evangelism is racism," Wolf said in written comments. "If people within the body of Christ cannot connect to each other in unity, then we prevent God's electrifying Spirit from moving through us to generate our desperately needed spiritual awakening.

"In the same way electricity cannot travel over a broken wire, God's Spirit cannot move through the sin of division, racism or classism," Wolf said. "Therefore, we must clearly call people we influence to adopt the attitude of inclusion and acceptance prescribed by Christ: 'Accept one another, just as Christ accepted you, in order to bring praise to God' (Romans 15:7)."

As Americans commemorate what would have been King's 87th birthday, Turner urged pastors to continue following the civil rights leader's admonitions to speak out against racism.

"We must work to make our churches look like heaven," Turner said. "Christian men, women, and children must reach across the aisle and befriend and love people of other races. We are all praying for revival. However, Christians must work to abolish the problem of racism in America before God will send revival."