The sanctuary of Emmanuel Community Church in Conyers served as the banquet hall for recognizing the New Work Foundation's 30th anniversary on March 22. Emmanuel is one of 59 churches that have been resourced by the Foundation since its inception. DAVID FEREBEE/Special
Posted Friday, March 29, 2019 12:11 am
Scott Barkley

The sanctuary of Emmanuel Community Church in Conyers served as the banquet hall for recognizing the New Work Foundation's 30th anniversary on March 22. Emmanuel is one of 59 churches that have been resourced by the Foundation since its inception. DAVID FEREBEE/Special

CONYERS — In 1989 a group of lay leaders in Stone Mountain Baptist Association recognized the need for a way to plant new churches. The output of that, the New Work Foundation, has since then seen:

Those accomplishments and others from the last 30 years were celebrated March 22 at Emmanuel Community Church in Conyers.

“Our focus from the beginning has been our tagline: ‘Resourcing new churches for healthy beginnings.’”

Funds toward purchase or construction

Gilstrap joined the New Work Foundation in 2016 after serving as executive director for the Baptist State Convention of Michigan. Before that, he’d been in Michigan as a North American Mission Board-appointed director of missions for ten years. 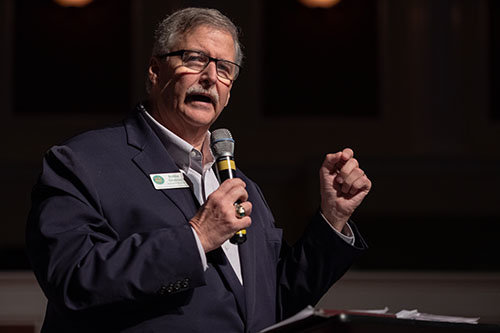 New Work Foundation Executive Director Bobby Gilstrap gives his charge entitled "Why are we here?" to the crowd. DAVID FEREBEE/Special

“In the earliest days of the Foundation, the plan was to give grants to new churches and new properties. However, it also was established to recover and save a building from being sold or a church on its way to closing,” he said. “The Foundation would either receive the building as a gift or negotiate a deal to buy it to ultimately get a new church or planter into the facility.”

Leadership coaching and other partnerships helped the churches grow. Over time as the church became healthy, it would arrive to a point of securing its own loan for a building or construction.

The Georgia Baptist Foundation manages the resources. The New Work Foundation, which is operated by a board of trustees, makes grants to church starts based on investment earnings from two funds:

A third stream, called the Memorial Fund, is similar to the other funds except it allows donors to make a specific grant to a project in honor of someone. 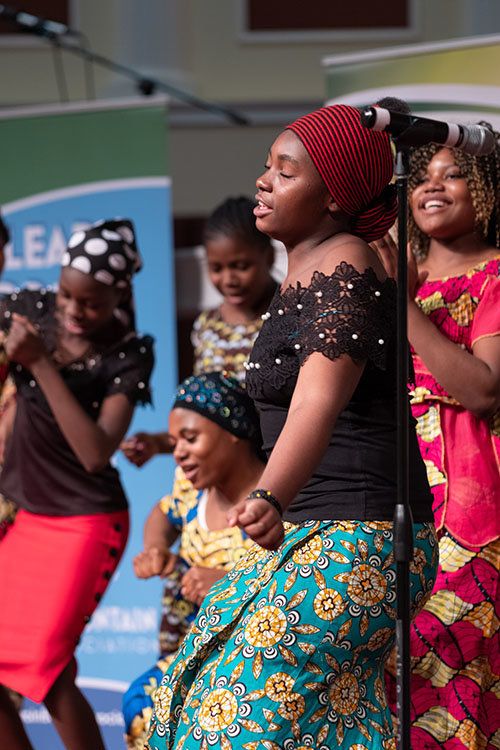 A member of the African (International) Choir from Reach the Nations Community Church in Clarkston sings at the banquet. DAVID FEREBEE/Special

Videos at the banquet of thankful pastors whose churches have benefitted from the Foundation testified to its effects.

“If it weren’t for the New Work Foundation, not only would this church not be in existence, but I question even how some of these people in our area would’ve even known the Gospel,” said Pastor Chip Wheeler of River Hills Church in Winder. “The contributions, the support, the encouragement, all has been a major factor in the success of what we’re seeing happen in our church.”

Eric Suddith serves as pastor of Emmanuel Community, site of the banquet. He recalled the direct contribution of a New Work Foundation trustee that made Emmanuel what it is today.

“It was Clarence Hall and a sacrifice of he, his family, and his wife that made this church come out of the ground,” he said. “The benefits of his legacy are being realized even now as many are coming to know Jesus Christ because of [his family’s] work. He’s in heaven right now and all of those souls are being credited to work.”

At the banquet, Emmanuel Community was presented the Church Champion Award for its efforts in actively helping plant area churches. At present they are the primary church partner for Life Abundantly Community Church in Conyers. Suddith also serves as Foundation president.

“It helped us gather resources and find certain people to help us lay that foundation. We would not be where we’re at today were it not for the Foundation.” 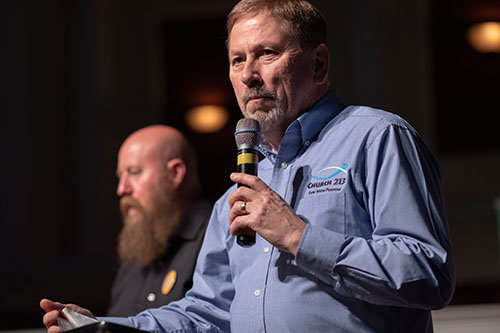 Stan Patterson, pastor of Church 213 in Covington, gives a testimony alongside church member Tim Catchings. Patterson was honored at the event as Church Planter of the Year. DAVID FEREBEE/Special

Clarkston has become known as a city that takes in refugees. Reach the Nations, in turn, has become intentional about not just reaching those refugees with the Gospel, but discipling them and working out a strategy for them to return to their homelands as ministers.

“Jimmy was from Liberia,” Johnson testified. “He came and was discipled in our church. We explained God’s missional vision to him.”

Jimmy had a heart for sharing the Gospel with his fellow countrymen in Liberia, Johnson explained. Over the course of several years that included discipleship and training of other pastors, the Gospel has been taken to regions of the country it had not entered prior.

“In the last four years,” Johnson noted, “we’ve seen the baptism of 127 Muslims. We’ve seen four churches planted in places where the Gospel has never gone. Jimmy’s now back in Libera and that ministry is exploding for the Kingdom of God.”

Thirty years ago, Larry Cheek was the church starter strategist for Stone Mountain Baptist Association. Today he remains closely connected to the New Work Foundation – his office is literally steps across the hall from Gilstrap’s – as associational missionary for SMBA.

“Churches have limited resources, so we decided to create a funding mechanism,” said Cheek. “Churches are typically using their money to either keep their doors open or continue to help in their growth. So, there isn’t a lot of money lying around to go to mission work. We needed a different strategy and Bill [Updike, retired associational missionary for Lawrenceville Baptist Association, now Gwinnett Metro] suggested we put laypeople, not pastors, on the board.” 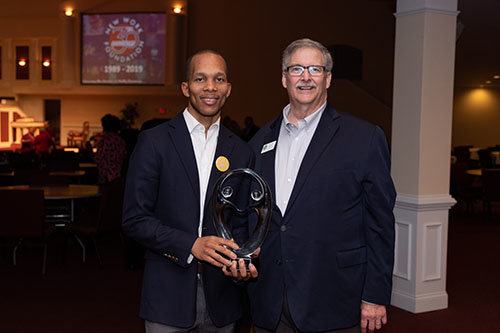 Bobby Gilstrap stands with Quincy Barnwell, pastor/planter of Grace Christian Church, Lithonia. The first annual “Difference Maker” award, given to the church that pre-registered the most people before the banquet, was presented to Barnwell at Grace Christian for their efforts in preregistering 30 people. DAVID FEREBEE/Special

The reason? The laypeople would have business backgrounds and therefore be more prone to better financial decisions with the funds.

A deacon at First Baptist Church in Covington, Bob Rutland had led Allied Trucking Systems into becoming one of the largest in the country, said Cheek. When approached and told about the Foundation, he presented them with a $25,000 check. (Side note: the Rutland family also gave $1 million toward the building of the chapel – named Rutland Chapel – at Ridgecrest Conference Center in North Carolina because of so many fond family memories there.)

“We’ve seen a lot of churches succeed,” Cheek stated. “Two things have to happen, though. There must be depth of resources and depth of personnel. If you can’t gather people or money when starting a church, you’re going to struggle.”

The 300 or so who attended the banquet heard from 14 pastors whose churches have benefitted from the Foundation. “The theme of that time was to celebrate everything that has happened the last 30 years,” expressed Gilstrap. “Many people who came to Christ wouldn’t have were it not for that church the Foundation helped plant.”