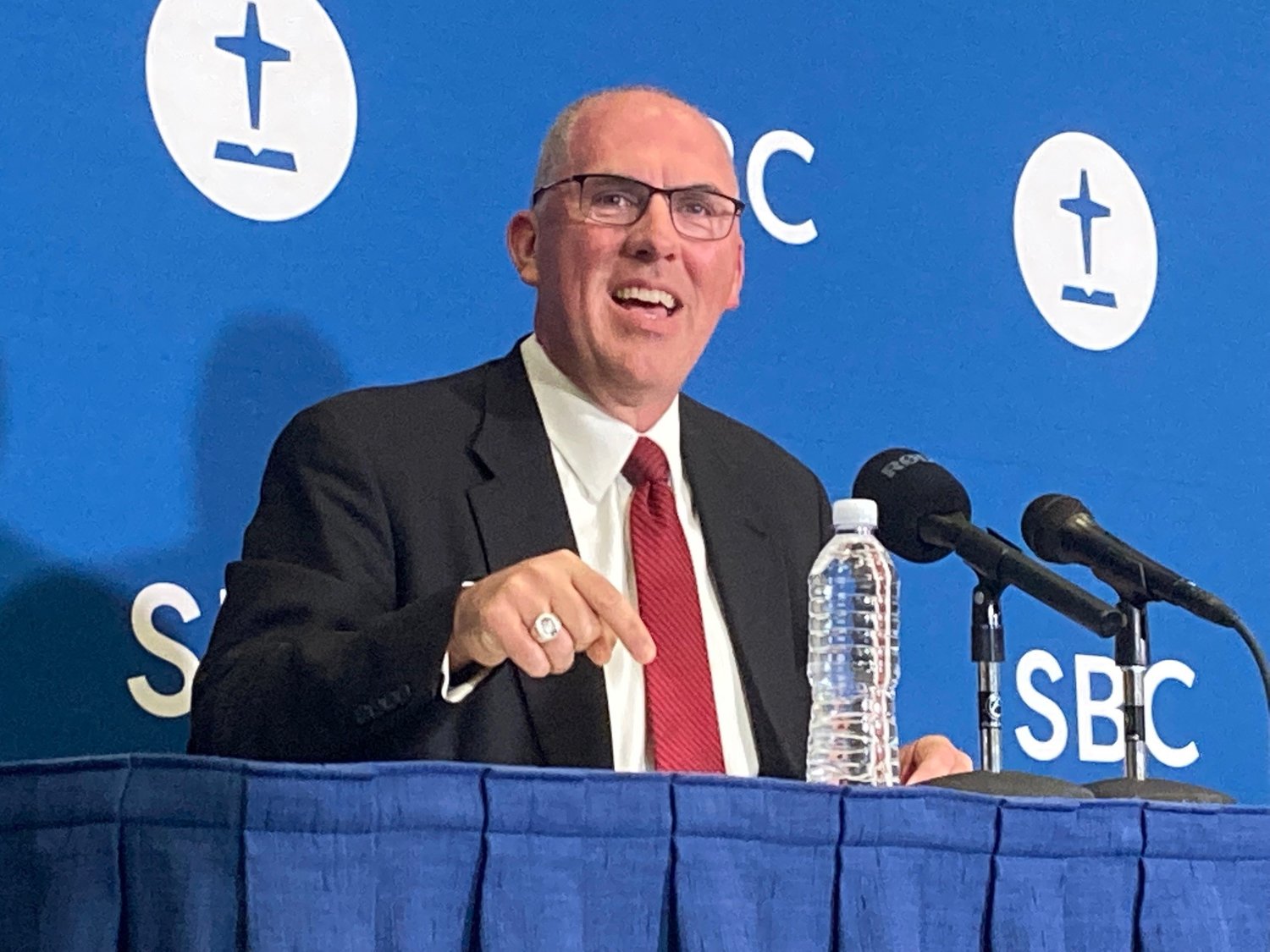 ANAHEIM, Calif. – Sexual predators have used the Southern Baptist Convention’s decentralized polity “to try to turn our churches into a hunting ground.”

“There is no diocesan bishop in the Southern Baptist Convention who can fire a pastor in a local church,” Barber told reporters at a press conference Wednesday morning. “There is no super-congregational presbytery who can defrock even the wayward pastor who most egregiously sullies the office of pastor. And so, sexual predators have in some cases moved from church to church, from scandal to scandal, manipulating our system to hide from accountability and pick off the sheep one-by-one.”

That, Barber said, is why his first priority as leader of the nation’s largest Protestant denomination will be to appoint members to a taskforce to implement sexual abuse reforms approved by SBC messengers on Tuesday. He said he intends to move quickly to appoint members to the task force.

Barber, pastor of First Baptist Church in Farmersville, Texas, said he wants sexual predators to be “put on notice that the tables have turned” and that “the hunter is now the hunted.”

“Where there is no diocesan bishop to fire a local pastor, there is also no diocesan bishop to protect him,” Barber said. “Where there is no regional presbytery to defrock a pastor, there is also no presbytery to reassign him while covering up his villainy. Predators have realized the vulnerabilities of our system. It is time for Southern Baptists to realize how nimble and resilient our Baptist polity can be to put sexual predators on notice that Southern Baptist churches are a dangerous place for them.”

Southern Baptists voted overwhelmingly Tuesday to implement safeguards to protect against sexual abuse in the nation’s largest Protestant denomination. That includes the creation of a system to track abusive pastors and other church leaders.

Passing the sexual abuse safeguards was the centerpiece of this week’s annual meeting and came as a result of a seven-month probe by outside investigators from the secular firm Guidepost Solutions. Those investigators compiled a report that concluded sexual abuse survivors had been “met, time and time again, with resistance, stonewalling, and even outright hostility” from the SBC Executive Committee.

Barber said he’s fully aware the task ahead of him will not be easy, and serving as president opens him up to critical attacks. He said having served in previous denominational leadership roles has prepared him for that.

“This is not the first difficult season of serving Southern Baptists for me,” he said. “Every way that I’ve served Southern Baptists has left scars. But this family of churches is worth it. It’s worth enduring some slings and arrows. It’s worth working through the difficulties. The coarseness, the crass discourse that’s out there in the world has come into our family of churches and sometimes we treat people in ways … that must make it hard to make people believe that we believe in the inerrancy and sufficiency of a Book that says the fruit of the spirit is love, joy, peace, patience, kindness, goodness, faithfulness, gentleness and self-control.”

Barber said he’s able to ignore comments of critics on social media but also to love the people that made the comments.

“I can look at what they said and know it was wrong, know that it was slanderous, and I say Jesus died for that person,” he said.