One church's heavy investment in adulthood starts with children

DOUGLASVILLE --- It carries images of silly games, snacks bought in bulk, and very short attention spans during a Bible study. Children's ministry can challenge the patience of the strongest volunteer. However, it builds another layer of tomorrow's church, brick by brick.

Scott Patrick has seen it for 18 summers.

Patrick, children's ministry director at First Baptist in Douglasville, worked in a print shop during the 90s. But back then he'll admit his full-time job didn't command his full-time attention.

"Around 1996 I was at a GO Tell camp at the Georgia Baptist Conference Center in Toccoa. God had made himself more real to me than at any other point. From there I began to pray, 'God, lead me to where you want me to be.' I remained open to it."

Responding to that call, Patrick soon became a bivocational youth minister. Later, he moved on to children's ministry at Tabernacle Baptist in Hiram, his home church. He came to First Douglasville in 2007 as minister of education, transitioning to his current position in 2013. The church recently had another staff change with Randy Mullinax joining as interim pastor due to the recent retirement of longtime pastor John Pennington. Mullinax also currently serves at the Georgia Baptist Mission Board with Church Revitalization and Evangelism.

"Over the years I felt God directing my passion toward children's ministry and helping others see the importance of it," says Patrick in the dining hall of Woodland Christian Camp, where First Douglasville has hosted retreats and camps for children for over 20 years.

Patrick became involved with camps at Woodland, located a mere 15 minutes from the church, in 2001. In today's environment of busyness, he's adamant about utilizing such retreats in ministry.

"Kids are so involved in activities outside of church," he points out. "It's becoming harder to make sure they're engaged in Sunday School and other children's ministries."

The potential for change

Patrick's early exposure to children's ministry echoes the experiences of others. 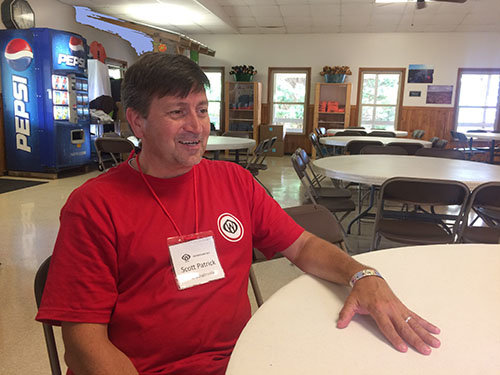 "Over the years I felt God directing my passion toward children's ministry and helping others see the importance of it," says Scott Patrick, children's minister at First Baptist Church in Douglasville. SCOTT BARKLEY/Index

"When I worked with Vacation Bible School, I saw the impact it had on not just the kids, but the volunteers," he recalls. "They didn't feel they could do anything big in ministry, maybe help serve snacks or directing kids during recreation. But, I witnessed it get them more engaged in the church. They got a little more on fire for the Lord.

"You could see the overflow to volunteering in their own Sunday School classes and outreach at church. They learned what could be done through VBS and and took that into other areas of the church."

George Barna, founder of The Barna Group, spoke in 2010 on the importance of resources for children's ministry.

"Within a generation if we heavily invested in ministering to children and preparing them for the kind of world they're going to face, it would really change the world in ways that none of us have seen in our lifetime," he said.

From early on, Patrick had a personal stake in making sure his church's children ministry was the best it could be. Just recently, his 23-year-old daughter Abby graduated from Shorter University's nursing program. Another daughter, Emmy, is a junior at UGA. Sophie, his youngest, is preparing for her senior year at North Paulding High School. All have gone through First Douglasville's children's ministry, with Sophie this year serving as a leader at Woodland Christian Camp.

Patrick not only hears, but sees the difference an active children's ministry made in his daughters' lives. In addition, he sees it in the testimonies of former students.

"Even the ones who now have kids of their own talk about the importance of camp and VBS and how they were so impactful," he says. "They made life-changing decisions for Christ, and a lot of them point back to those times."