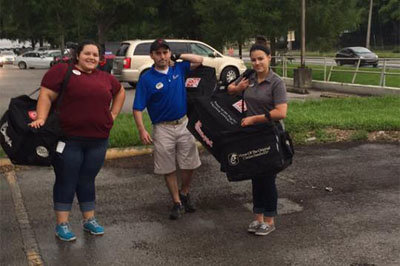 Employees of a Chick-fil-A in Orlando carry food and drinks for first responders and those waiting in line to donate blood the morning after an Orlando nightclub shooting. FACEBOOK/Photo
Posted Tuesday, June 14, 2016 10:34 am
Scott Barkley 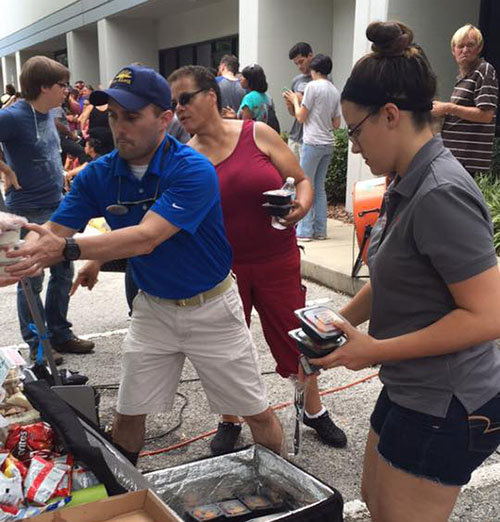 Employees of Chick-fil-A stores in Orlando hand out food and drinks to first responders and those waiting in line to donate blood the morning after an Orlando nightclub shooting. FACEBOOK/Photo

ORLANDO — Employees from at least two Chick-fil-A stores in Orlando showed up at work Sunday to prepare and provide free sandwiches and tea for others following the shooting at a gay nightclub.

Employees of the popular fast food chain, based in Atlanta, were seen passing out sandwiches and tea to those waiting hours in line to donate blood as well as to law enforcement personnel responding to the largest mass shooting in U.S. history, reported Fox 35 in Orlando. In addition, flags at restaurants across the country were flown at half-staff in honor of those killed.

In 2012, Chick-fil-A came under fire after Chief Operating Officer Dan Cathy expressed his opinion in support of traditional marriage between one man and one woman, drawing the ire of LGBT groups. Two years later in an interview with the Atlanta Journal Constitution Cathy expressed he would step back from commentating on political topics, though not backtracking from his earlier position.

Historically, the franchise has been closed on Sundays due to founder Truett Cathy's stance that employees should have that day to rest, spend time with their families, or worship if they choose to. In addition to that position, though, the company has a strong history of community involvement and support in times of need. Last December, several stores in the northeast Dallas area provided food on a Sunday after tornadoes ripped through the area, killing 11 people.

In a statement, Chick-fil-A also said, "Orlando is in our heart and prayers."