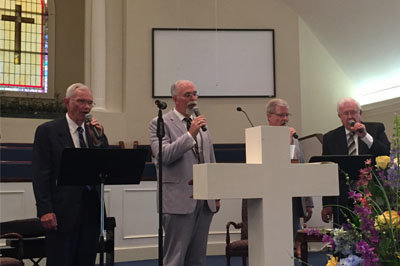 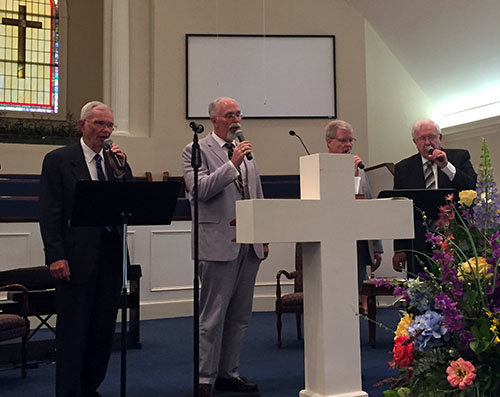 ELLIJAY — James Buchanan was the president of the 32 states that comprised the United States in 1858. That was the year Abraham Lincoln gave his “House Divided “ speech at the State Capitol in Springfield, IL on accepting the Republican Party nomination for a seat in the U. S. Senate. 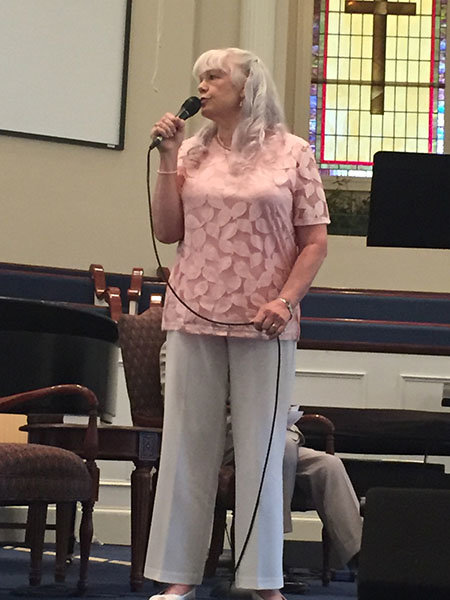 Nancy Fitzpatrick sang "The King Is Coming" to the delight of the congregation at Pleasant Grove¹s 160th anniversary. GERALD HARRIS/Index

In July of 1858 thousands streamed into the Rocky Mountains of the western United States during the Pike’s Peak gold rush. Theodore Roosevelt, 26th president of the U.S., was born in 1858 and Dred Scott, the well-known slave, died that same year.

However, in Gilmer County, a body of members from Flat Creek Baptist Church crossed the Coosawatee River on May 16, 1858 to establish a new church, which they called Pleasant Grove Baptist Church. There were twelve charter member: six men and six women.

The history of Pleasant Grove records the growth of the church after a revival in the early 1900s. The first meetinghouse was destroyed by fire, but a new facility was constructed in 1926.

In the late 1990s Pleasant Grove experienced another season of growth, which inspired plans to build again. The church currently meets in an extraordinarily attractive building that was completed in December of 2001 with additions added in 2006 and 2007. The church campus is beautifully situated on a hill overlooking the surrounding community and city of Ellijay.

Dan Rosser is the current pastor of Pleasant Grove and presided over the worship service this past Sunday as the church celebrated its 160th anniversary.

The morning began at 10:00 with a concert of special music provided by members of the church. Solos, trios, quartets, and the children’s ensemble sang music that filled the sanctuary and echoed to the very gates of glory. Pastor Dan Rosser’s vocal range was challenged with the song “How Big is God,” but his singing voice is superb and he thrilled the congregation with his musical ability, as did the other participants.

The senior editor of The Christian Index was the preacher for the morning, but the music is what made the day so special for those in attendance. 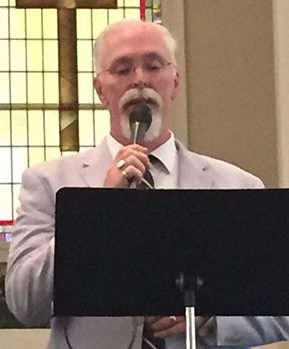 Dan Rosser, who has served as the pastor of Pleasant Grove for five years, sings "How Big is God" in the music service prior to the hour of worship. GERALD HARRIS/Index

The meal that followed was a fitting conclusion to a perfect day at church. The fried chicken, meatballs, ham, vegetables, casseroles, salads, and desserts were prepared by some of the finest cooks on the planet.

Pleasant Grove has no intention of embracing the status quo, settle back, and just enjoy the present blessings God has bestowed upon their fellowship. During the worship service the pastor announced that the church would be collecting funds to build a pavilion and basketball court on its 12-acre campus for the purpose of inviting youth and adults to events that could become a gateway to salvation and church involvement.

Rosser indicated that $42,000 had already been received and another $50,000 had been promised as a matching gift if the church would give another $50,000.

All in all, it was a great day – an exciting and pleasant day at Pleasant Grove. There is nothing quite like a good, old-fashioned, church homecoming, anniversary celebration.