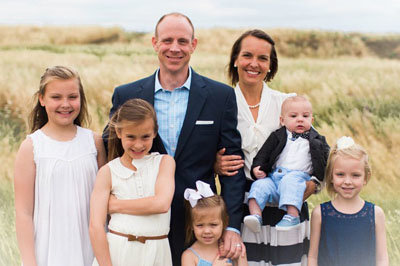 Josh Smith, who will begin as senior pastor at Prince Avenue Baptist in Bogart on Jan. 18, stands with his family. SMITH FAMILY/Special
Posted Thursday, December 21, 2017 12:00 am
Gerald Harris

Josh, whose parents are Bailey (former Southern Baptist Convention president) and Sandy (Elliff) Smith, is a fourth generation pastor on both sides of his family. He grew up in Duluth and graduated from Providence High School in Gwinnett County.

After graduating from Liberty University in Lynchburg, VA in 1997 with a degree in Cross-Cultural Studies, he moved to central Europe and was a full-time missionary in Slovakia for three years. He has ministered in more than 25 countries and worked extensively with international students.

Josh graduated with a Masters of Divinity degree from Southwestern Seminary in 2003 and married Andrea Hartley the same year. Andrea also grew up in the Atlanta area and graduated from Providence High School in Gwinnett. She earned an Education degree from Wheaton College in Wheaton, IL in 2000 and is the author of Manners Matter for Students. Her father is the pastor of Lilburn Alliance Church in Lilburn.

In addition to preaching and teaching, Josh led a staff of six pastors as well as other ministry team and support staff. He also consistently invested in a group of ten men each year in leadership training.

In 2015 the new Prince Avenue pastor earned a Doctor of Ministry in Expository Preaching degree from Southwestern Seminary.

The new Prince Avenue is passionate about the exaltation of Christ and advancing Christ’s kingdom to the ends of the earth. Pastor Smith will begin his service at the church Jan. 14.