Reflecting a community, but offering much more: how one church connects

The crowd at Emmaus Baptist Church greet each other during the welcome time Aug. 19. Though with a Resaca address, many members live in south Whitfield County and the Dalton area. SCOTT BARKLEY/Index
Posted Friday, August 31, 2018 11:20 am
Scott Barkley

The crowd at Emmaus Baptist Church greet each other during the welcome time Aug. 19. Though with a Resaca address, many members live in south Whitfield County and the Dalton area. SCOTT BARKLEY/Index

RESACA — The life of Emmaus Baptist Church has largely reflected of the community in which it lies. Times of relative prosperity get hit with tough economic struggles. The sense of "normal" changes. Continuing effective ministry becomes something you learn on the fly.

In that process, reflects Pastor Scott Parrish, the church emerges as something more connected to its community. And the power that motivates Emmaus to continue forward – the gospel – becomes something others see worthy of investigating.

"Sharing Christ and reaching people, making a difference in our community, was in our DNA to begin with," says Parrish. "We started with an emphasis of helping people and continued it."

In 2007 the Dalton area had yet to experience the ravages of the Great Recession. However, an economy practically synonymous with the carpet industry fared as well as one would expect. By March 2009 the unemployment rate had peaked at 13.4 percent.

"The recession had a tremendous effect and we had to tighten up our belts," reflects Parrish, who along with his wife, Tammy, grew up in Dalton. "Many people were out of work. We couldn't do as much ministry, but tried to reach out through sports teams and in the schools to support them."

But things improved. Hard times force re-evaluation and changing to more effective methods. The carpet industry became more computerized. And although Dalton's unemployment rate climbed back to 5 percent in July, it had gotten to as low as 4.1 percent in May of this year.

A visit to Emmaus these days reflects a church active and growing, continuing to make inroads in an area (extreme southern Whitfield and northern Gordon counties) long haunted by poverty. 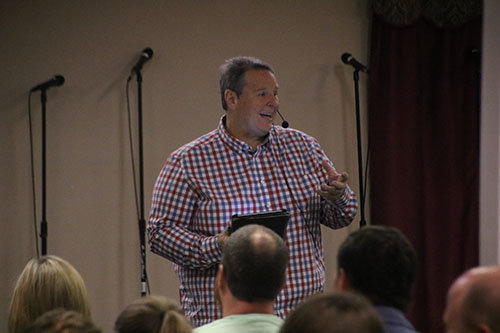 As pastor of Emmaus since its beginning in 2007, Pastor Scott Parrish has seen the struggles of the community and led the church in meeting those needs. SCOTT BARKLEY/Index

The church's early days were marked by constant movement, literally. First meeting at a restaurant – Parrish remembers it called "Country Kitchen" – Emmaus would go on to share space in a Methodist church. Meeting in a carpet building followed, but the high rent prompted a move to a spot in a strip mall adjacent to a truck stop.

In November 2014, the church moved just down South Dixie Highway from the truck stop to its own property. Today, it meets in a single building comprised of seven 14' by 70' single-wide trailers patched together that used to be extra classroom space for Hebron Baptist in Dacula.

Don't let the term "patched together" fool you, though. It's a feat of engineering worthy of seeing for yourself. Entering through the main entrance, a hallway the length of the building puts classroom space and a large children's area on the left. Bathrooms sit on opposite ends near the entrance, as does a kitchen and another classroom on the right.

The sanctuary takes up most of the space on the right side of the hall while serving as another classroom space. Yet another class meets in a room on the sanctuary side at the far end from the entrance. That room also holds the baptistry, which required a modification for it to be part of the sanctuary.

"We just cut a hole through the wall for people to be able to see," Parrish explains.

To build a credible ministry

The church averages around 100 in worship, says Parrish. Various ages dot the crowd, with a group of around ten teenagers joining children, senior adults, and families. The welcome time sounds a tad more boisterous than what one may hear in most churches.

"We're pretty casual," he adds. "There's a good mix of people here. We work hard to build a credible ministry to families, reaching out to them through children and youth." 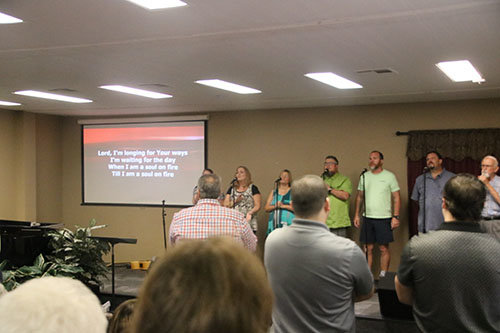 The worship team of Emmaus Baptist Church leads others on Aug. 19. SCOTT BARKLEY/Index

Church members Robert and Lisa Leamon lead one of those key ministries. A little over a year ago, Robert left the carpet industry to focus on Christ-Centered Martial Arts. Now with dojos in Dalton and Chatsworth, CCMA focuses on "teaching courtesy, discipline, honor, integrity, self-control, and loyalty" according to its website.

Emmaus also ministers to children at nearby Valley Point Elementary and Middle schools. The church's food ministry, passing out groceries once a month, has helped many of those children and their families. Some started attending Emmaus, with a few coming to salvation as a result. Recently the church held a baptism service for someone first reached through the food ministry.

'Not sufficient to yourself'

That concept of reaching others in need permeated a sermon by Parrish on Aug. 19. "Your greatest need can become a blessing," he preached. "If you depend on God, you can do a lot more through Him than you could ever do alone."

"When you're in need it causes you to look up and realize you're not sufficient to yourself," he points out in reflecting back this week on that message. "That brings an open door to present Christ, to offer them more than this life has to offer."

Emmaus has grown alongside the community in which it lies. When an outside force, such as a recession, affects the people it's also going to affect connected institutions, such as a church.

But, the church pushes back as an influencer in its own right. It's a principle Parrish doesn't want to see lost among his fellow pastors of churches in rural areas, where the opioid epidemic often finds a home and issues such as unemployment are impossible to ignore. 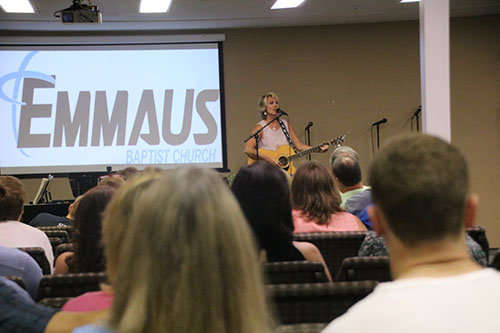 Guest Rita Hullender, who's been playing guitar since she was 12, gives a special music presentation. SCOTT BARKLEY/Index

"Create an atmosphere of acceptance," he encourages. "Engage people. Don't convey the idea of 'you have to look like us to come here.' People can tell if you accept them or not.

"We've had a lot of success in reaching people by bringing them in alongside us. They learn about Christ and become Christians by us letting them get involved. Many of them have a rudiment of faith, but aren't clear about their salvation. We place a big importance on reading the Bible daily. You can tell who adopts that and see the life change that comes from it.

"Later, some tell us they realized they weren't saved. Others say they were, but had drifted far away."

The process, when you think about it, reflects that of going through a time where something is broken down. After a period, though, it's rebuilt to what it was supposed to be. As revealed in a DNA strand, the possibility was there from the beginning.