She grew up the child of a Baptist minister and many happy years of her childhood were spent in Perry, where she graduated from Perry High School. At Tift College she studied elementary education and minored in organ, graduating in 1951. She began her dual careers as both a public school teacher and a church organist in Forsyth. 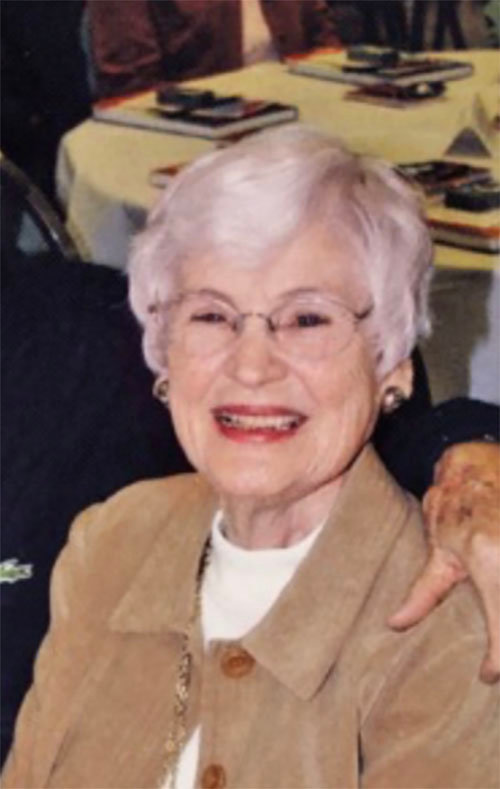 Sarah married her sweetheart, Waldo Martin Woodcock on June 14, 1952, whom she met on a blind date while attending separate schools. She continued teaching and playing the organ when they moved to Wake Forest, N.C., so Waldo could attend Southeastern Seminary. Although she and Waldo did not have children of their own, they loved and cared for many a child in congregations where they lived and served throughout Georgia.Notes of

Sarah and Waldo lived in Decatur and later in Conyers while Waldo served for 28 years as leader of the Discipleship Training Department for the Georgia Baptist Convention (now Georgia Baptist Mission Board)  Sarah volunteered with many church and community groups.

She served for several years with DEFACS “Mother’s Club” in Rockdale County, working to help young mothers and their families. She was also active in many church efforts to help refugees, the homeless, and others in need. Sarah had a way of performing quiet but effective service and of making everyone she encountered feel loved and appreciated.

Visitation will be at 12:30 p.m. and the funeral service will be held  at 1:30 p.m. on Wednesday, October 10 at Moore’s Funeral Home, 301 South Wayne St. in Milledgeville with interment to follow at Baldwin Memorial Gardens.

The family suggests memorial donations be made to the International Mission Board of the Southern Baptist Convention, or to a charity of the donor’s choice