Sardis Church dodges sleet and snow for outside nativity

PALMETTO — Mary and Joseph and Baby Jesus didn’t have to wear down jackets after all for this season’s performance of Sardis Baptist Church’s outside nativity.

Foul December weather of sleet and up to 6 inches of snow south of Atlanta brought the normally warm weather event to a screeching halt earlier this month. But a rescheduled telling of the Christmas story came off without a hitch with cool-but-acceptable weather last weekend.

“Two years ago when we had our first performance the weather was just perfect,” says Jami Wall, who wrote the narrative. “The actors were very comfortable and even wore sandals and such. The temperature was in the 70s, very biblical,” she relates.

“It was just perfect.” 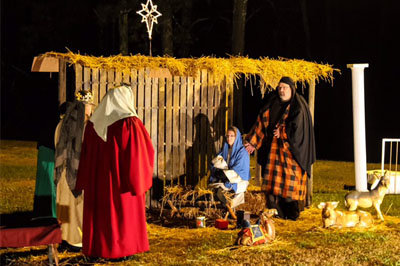 The Holy Family is greeted by the Wise Men in this scene on the progressive set. JAMI WALL/Special

But this year’s unexpected winter storm, which brought more than 10 inches or snow to Marietta and points further north to the state line, changed all that.

Before the storm hit, Wall was even a little excited about getting a dusting of snow, as was originally expected. The sudden onslaught of frigid weather changed all of that and made the performance impossible for the actors and those families sitting in 70 folding chairs.

“Our original 2015 performance was such a success we had to put out chairs for the overflow crowd from the community. We even ran out of home baked cookies the first night and our church members were pressed into service baking for much of the next day for the following two performances,” Wall says with a laugh.

Weather turned from excitement to no laughing matter

However, this year’s weather was no laughing matter. The three performances were cancelled and rescheduled for just two on the very next Saturday and Sunday evenings.

Attendance was down as a result but spirits remained high. 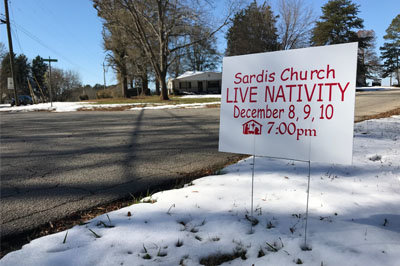 Six inches of snow is perfect for indoor Christmas programs but not too popular for outside presentations. JOE WESTBURY/Index

In looking back to 2015, pastor’s wife Roxanne Todd added that the small congregation was surprised at the nearly 225 who showed up for the original performances. The church even collected a couple hundred dollars for the Lottie Moon Christmas Offering from people who wanted to make a contribution.

“Our nightly attendance was double the 40 or so we average in Sunday morning attendance and people thanked us for months,” she remembers.

This year’s performance, due to the reduced schedule and still-chilly weather, only saw about a third of the crowd but the gospel was still shared.

“Christmas just snuck up on us last year so we did not have enough time for an encore performance but we didn’t let that happen this year. We are a small church and many of our members are elderly, so we don’t have a lot of actors to pull from,” Todd explained. Resources are limited, if not non-existent.

“Journey to Bethlehem,” as the presentation is called, was the brainchild of the two women who wanted a different approach to the seasonal story. But while operating on a shoestring budget they overcame obstacles that would have stopped others in their tracks. 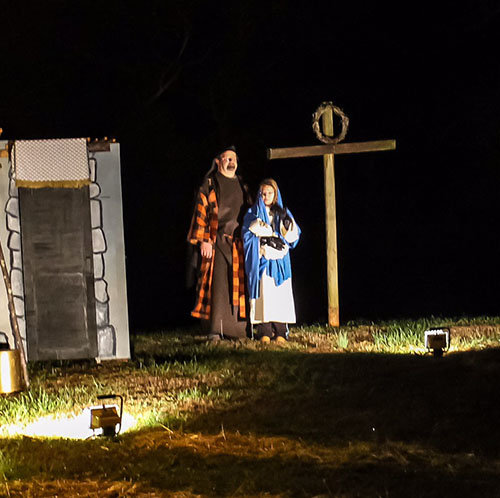 The presentation ends at the foot of the cross and a gospel presentation that Christ came to die for mankind's sins. JAMI WALL/Special

Even though the church is literally located in the middle of a cow pasture, there were no animals in the production. Rather than a drive-by living nativity, guests sat in chairs and watched the 15 actors move between portions of one long scene. The church pavilion across the street provided solid footing for the chairs and the audience looking out onto the production.

As in the past, guests were treated to hot chocolate and baked goods in a small heated room dubbed the Bethlehem Café.

Wall, the choir director and music/worship leader, wrote the narrative in about a month with input from Todd.

“I wrote it in a rhyming, sing-song style similar to Dr. Seuss but with an obvious more serious approach,” Wall says. “I had never been to a drive-through nativity until after we presented ours because I didn’t want any pre-conceived ideas as I wrote.”

Resources were limited but the spirit was not

A limited budget is an understatement. The manger was built out of wooden pallets and scenes were constructed from old doors found in her grandmother’s basement.

“We just used stuff laying around; we didn’t have a budget to purchase anything.” 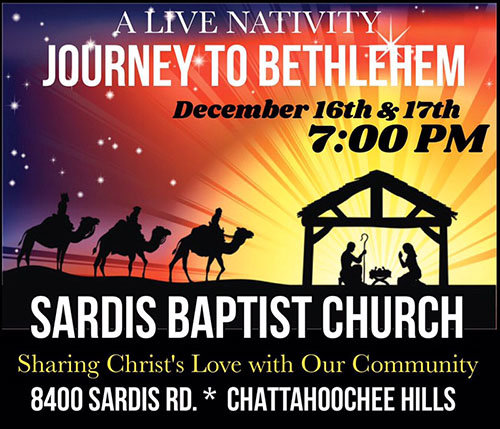 Festive posters were distributed throughout the Chattahoochee Hills area to build visibility for the performance. JAMI WALL/Special

With such limited resources but an unlimited spirit, church volunteers reconstructed that original set from two years ago. The audience looked out from their chairs onto Joseph’s house, Mary’s house, which also doubled as the Innkeepers’ house with a different lighting effect. Caesar made his mighty pronouncements while standing on a couple of pallets between two columns.

Special lighting carried the story through the set as the actors transitioned between the scenes. Wall narrated and a couple of solos rounded out the 40-minute presentation.

“The whole purpose was to tell the story of Christ from a baby in a manger to a Savior on a cross ... that He was born so He could die for our sins,” Wall explained.

And the Holy Family, aided by a cast of shopkeepers, townspeople, and angels, did just that in grand fashion.

Rick Todd has served as bivocational pastor of Sardis Baptist Church in Palmetto for nearly 5 years. The rural congregation was founded in 1875 and for decades had services only one weekend a month. In 1935 services were doubled to twice a month; records show that as late as 1947 horses and wagons were still used as the primary method of transportation. The outside pavilion, which was constructed in 2008, has become a hub of community activity for any residents for family picnics, reunions, and birthday/anniversary celebrations and serves as an outreach tool by the church.