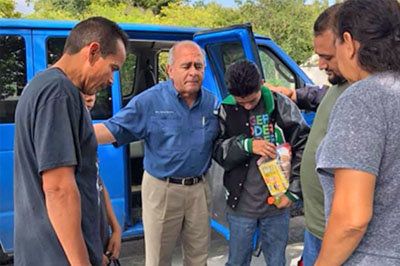 BROWNSVILLE, Texas (BP) — While state and national officials craft responses to the humanitarian crisis along the Mexico border, Southern Baptist entities -- including the Southern Baptists of Texas Convention and the North American Mission Board -- are actively engaged in addressing the migrant influx.

"The crisis at our southern border is unlike anything we've witnessed before and has put an enormous strain on the existing resources we have in place," Texas Gov. Greg Abbott said. 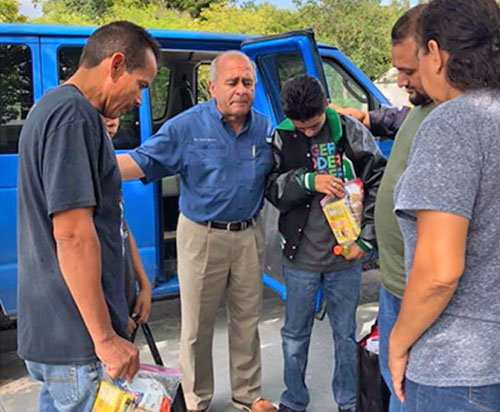 Abbott announced June 21 the deployment of 1,000 Texas National Guard troops to assist the Department of Homeland Security and the Customs and Border Patrol. The U.S. Congress passed a $4.5 billion border relief package June 25, while the U.S. Senate's bipartisan bill to allocate $4.59 billion for the crisis advanced out of the Senate Appropriations Committee on a 30-1 vote the preceding week.

"I am grateful for churches and ministry groups in New Mexico, Texas, and California helping in a variety of ways, such as serving hot meals and non-perishable lunches and providing other ministries of compassion as they are able," he said in written comments to Baptist Press. "The hands-on ministry being done through local churches working in partnership with one another and in their associational and state networks is what Southern Baptists are all about."

Floyd noted that at last year's SBC annual meeting in Dallas, Southern Baptists "formally called on elected officials, especially those who are members of Southern Baptist churches, to do everything in their power to advocate for a just and equitable immigration system."

"In the meantime," Floyd said, "we urge Southern Baptists and other Christ-followers to be the hands and feet of Christ to those in need."

Not a new crisis for churches

Navarro has been involved in ministry to migrants since his arrival in the Valley a quarter-century ago, when he took over weekly teaching at a Brownsville detention center. After the closure of that facility in 2006, he began ministering at Southwest Key's Casa Padre center. More than 1,500 young men and boys voluntarily attend Navarro's weekly Bible teaching at Casa Padre, and recent weeks have seen the numbers of decisions for Christ soar from 150-200 to 200-250.

The church formed Golan Ministries – its name a reminder of the pastor's support of Israel – "where my Lord and Savior will one day return," in April 2018 after the Mexican Consulate in Brownsville contacted Navarro for help with that summer's migrant crisis. Since then, Golan has provided water, clothing, food, and Spanish Bibles to migrants on both sides of the border. The SBTC donated 1,500 Bibles to that effort.

In late April this year, West Brownsville Baptist began serving as an overflow respite center when the city's two other emergency shelters, operated by the Catholic Church, reached capacity, and the mayor and city commissioners approached Navarro for help.

"They are sending us the most vulnerable, moms and dads with children, and single moms with children," Navarro said, noting that migrants from South and Central America, India, Pakistan, and Africa have sheltered at the church after clearing U.S. Immigration and Customs Enforcement (ICE).

While the city of Brownsville has financed efforts at the other respite centers, West Brownsville Baptist has received no city funding and has relied upon donations, including significant grants from the SBTC and NAMB. The Red Cross donated 1,000 toiletry kits, some blankets, and 20 cots.

"We go through a bottle and a half of Lysol a day to keep things sanitary," Navarro said.

He also needs Bibles – preferably the revised Reina-Valera 1960 Bible with black covers – because West Brownsville is addressing both the spiritual and physical needs of the migrants. Navarro shares the Gospel. Some 900 of the shelter's 1,600 guests have reportedly professed to trusting Christ as their Savior to date.

In addition to the work of churches like West Brownsville along the border, SBTC DR volunteers have teamed with the Salvation Army in El Paso and Del Rio this spring and summer to serve migrants who have passed through security, been vetted by the border patrol, and undergone medical screening before arriving at temporary shelters.

In Del Rio, small SBTC crews have rotated in and out to man a shower/laundry unit. The SBTC's DR bunkhouse has also been on site, housing Salvation Army and SBTC volunteers. SBTC shower and laundry operations were suspended in late June and will resume after July 4.

Since May 5, disaster relief volunteers have helped prepare and serve from 600 to 1,400 meals per day in El Paso.

Also see other related reports on how Southern Baptists have responded to the crisis in New Mexico and as reported in the North Carolina Biblical Recorder.

Prehistoric fish may spawn in Georgia: 1st time in 50 years

Taiwan, China hold opposing military drills amid tensions
HUALIEN, Taiwan (AP) — Taiwan is staging military exercises to show its ability to resist Chinese pressure to accept Beijing's political control over the island. The drills Wednesday off the southeastern county of Hualien follow days of Chinese missile firings and incursions into Taiwan's sea and airspace by ships and planes from the People's Liberation Army, the military wing of China's ruling Communist Party.
© Copyright 2022 The Christian Index | Copyright/Terms of Use
Powered by Creative Circle Media Solutions