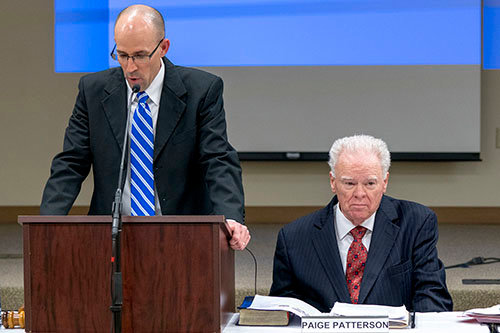 FORT WORTH, TX — Yesterday, Southwestern Baptist Theological Seminary Board of Trustees Chairman Kevin Ueckert issued a statement following a flurry of questions related to the immediate termination of President Emeritus Paige Patterson on May 30.

Based on a number of follow-up questions I have received this week, I am providing this additional statement related to our May 30, 2018 statement. The unanimous decision by the Executive Committee to immediately terminate Dr. Paige Patterson was prayerfully considered and warranted.

We confirmed this week through a student record, made available to me with permission, that an allegation of rape was indeed made by a female student at Southeastern Baptist Theological Seminary in 2003. This information contradicts a statement previously provided by Dr. Patterson in response to a direct question by a Board member regarding the incident referenced in our May 30 statement. The 2003 rape allegation was never reported to local law enforcement. SWBTS will not release the student record to the public without additional appropriate permissions.

In addition, as previously disclosed, a female student at SWBTS reported to Dr. Patterson that she had been raped in 2015. Police were notified of that report. But in connection with that allegation of rape, Dr. Patterson sent an email (the contents of which were shared with the Board on May 22) to the Chief of Campus Security in which Dr. Patterson discussed meeting with the student alone so that he could “break her down” and that he preferred no officials be present. The attitude expressed by Dr. Patterson in that email is antithetical to the core values of our faith and to SWBTS. Moreover, the correlation between what has been reported and also revealed in the student record regarding the 2003 allegation at Southeastern and the contents of this email are undeniable.

The morning after the May 30 Executive Committee meeting, Mr. Sharp provided a few documents he reportedly obtained from Dr. Patterson. The documents clearly dealt with Dr. Patterson’s tenure at Southeastern and should have been previously provided in response to Mr. Anderson’s May 25 request. Shortly after these documents were provided, the wife of Dr. Patterson’s Chief of Staff published a blog and attached these documents without the permission of the students referenced in the documents or appropriate leadership from SEBTS or SWBTS. I believe this was inappropriate and unethical. Regardless, the additional documents do not alter the decision of the Executive Committee.

Ultimately, the decision of the Executive Committee to immediately terminate Dr. Patterson was clear and unanimous.

I also want to reiterate what SWBTS Interim President Dr. Jeffrey Bingham said earlier this week. SWBTS denounces all abusive behavior, any behavior that enables abuse, any failure to protect the abused, and any failure to safeguard those who are vulnerable to abuse.

In this difficult situation, the Executive Committee based its decision on the current performance of the president and did not allow the legacy of Dr. Patterson or the #MeToo pressure to steer the outcome. We did not react; rather, we decisively exercised our responsibility based on the Seminary’s biblically informed core values and integrity.

I join Dr. Bingham in his call for the SWBTS community to join the Body of Christ in praying for healing for all individuals affected by abuse.

The Committee’s decision to terminate Patterson was made while the latter was on assignment in Germany and unable to respond to the Committee's findings. This has become such a major news item in Southern Baptist life that it is very likely this is not the final chapter of the story. In the meantime, we join the Southwestern Seminary family in praying for the school.