FORT WORTH — Not long after accepting the pastorate at Centralhatchee Baptist Church in Heard County, a young 18-year-old minister ran into a problem.

"One Saturday night I started flipping through my Bible trying to find a sermon for the next morning," Vines wrote in his 2014 autobiography Vines: My Life and Ministry. "I went from Genesis to Revelation. Nothing. I got on my knees and cried out to God, 'Lord, I've just been a pastor for a month. I've preached the whole Bible and don't know what to preach in the morning!'"

Sure enough, the messages came.

As one of Southern Baptists' most respected statesmen and pastors, Vines would go on to serve at several churches. Eventually, he landed at First Baptist Church Jacksonville, FL, a position he would hold for 24 years. His 60-plus years of ministry continued, though, through speaking engagements, as a writer, and motivation behind the materials for fellow ministers at JerryVines.com.

If anyone could claim "been there, done that" it's Vines. However, the longtime pastor took on another title – student – by enrolling in the Ph.D program at Southwestern Baptist Theological Seminary.

Making progress to the finish line

"All of his life, Jerry Vines has been a student par excellence," stated Southwestern President Paige Patterson. "For Vines, who already has a Th.D., now in retirement to seek a Ph.D. with our School of Preaching should inspired every preacher to keep studying and learning all his life. I will be the most surprised man on earth if he does not write one of the finest dissertations ever." 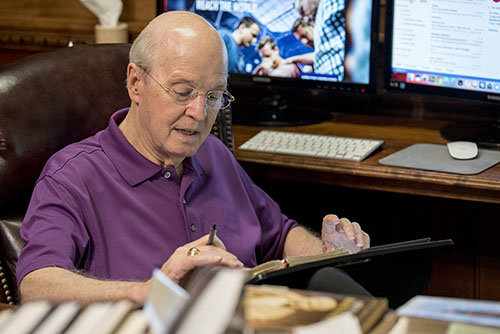 Jerry Vines, longtime pastor of First Baptist Church in Jacksonville, FL, recently enrolled in Southwestern Baptist Theological Seminary's Ph.D. program. Even after retiring from First Jacksonville in 2006, Vines has maintained a busy schedule. The video web conferencing options in the program, he says, helps him honor his speaking and writing responsiblities. SWBTS/Special

In a press release from Southwestern, Vines reflected on how retirement affected him. Currently he's no longer the full-time pastor of a church, but deemed it important to continue studying and pushing himself as a communicator of Scripture. In his most recent book Progress in the Pulpit (co-authored with Southeastern Baptist Theological Seminary professor Jim Shaddix), Vines wrote, "I am not content to coast to the finish line. I intend to keep making progress as a preacher until then."

Through Southwestern's flex access Ph.D. program, Vines can participate in seminars through live, real-time video web conferencing. As a result, he says, the option allows him to be a student while remaining committed to a busy writing and traveling schedule.