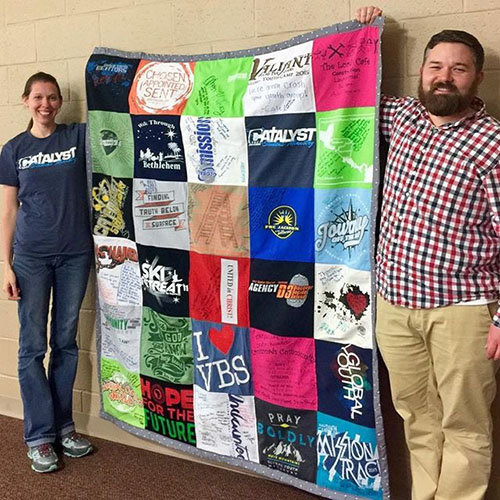 Megan and Daniel Peavy hold the T-shirt quilt presented on the last Wednesday night, March 8, of Daniel's service as student minister at First Baptist Church in Jackson. The quilt was made up of 25 shirts from nine years' worth of camps, mission trips, and other events from First Baptist's Catalyst Student Ministry. DANIEL PEAVY/Special

JACKSON — When ministers move on to other positions, they never forget where they've been and the relationships built. Even without tangible items to hold and touch, those experiences stay with them.

But, the students at First Baptist Church in Jackson didn't want to take any chances with now-former student minister Daniel Peavy. So, they presented a quilt out of nine years' worth of T-shirts from retreats, camps, Vacation Bible Schools, and any other reason youth groups make a shirt. Students, parents, and ministry volunteers gave the snuggly memento to Peavy and his wife, Megan, on Wednesday evening, March 8, his last with the church. Peavy begins his position as student and college pastor at Rockdale Baptist in Conyers on April 2.

Student volunteer Linda Watts patched together 25 shirts donated from members of First Baptist's Catalyst Student Ministry. Memories represented on the quilt include mission trips to Kentucky, Honduras, and Malawi. As one would imagine, the gift made an impact on Peavy.

"I got very emotional when it was presented to me," he admitted. "Seeing all of those shirts on one quilt brought back a flood of wonderful memories. It serves as a great reminder of the joy of what the Lord has called me to do."

Remembering the past for future ministry

On the morning of Feb. 16, Peavy shared in a Facebook post what he'd told his students the night before regarding his future position in ministry and time at First Baptist.

"Nine years ago Megan and I answered the Lord's call on our lives to come and plant ourselves in Jackson, Georgia. During this time, [w]e have made lifelong relationships and seen the Lord do some amazing things both in and through us," he wrote. "... I've had the opportunity of seeing classes of students grow and mature from 6th grade through graduation and even into adulthood.

"... Our family loves the students of Catalyst Student Ministry, and the families of FBC Jackson. And I believe The Lord will continue to do great things both in and through FBC!"

Countless trips, counseling sessions, discussions of how to put Christ in the center of a teenager's life – the quilt serves as a reminder of them all. However, Peavy pointed out the gift's future role as he moves into another position of ministry.

"It reminds me of the journey the Lord has taken me on, how He has stretched, challenged, and spurred me towards growth," Peavy said. "I believe it's one of the most thoughtful gifts I have ever been given."