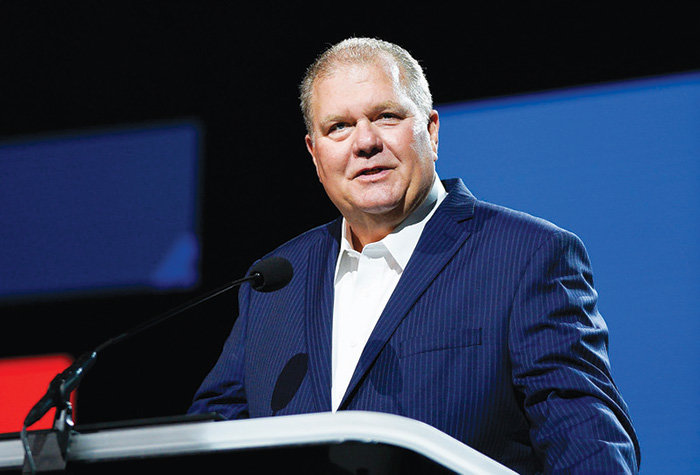 “Guidepost is committed to strengthening diversity, equity and inclusion and strives to be an organization where our team can bring their authentic selves to work.

“We celebrate our collective progress toward equality for all and are proud to be an ally to our LGBTQ+ community.”

Guidepost Solutions was chosen last September by the SBC Sexual Abuse Task Force to oversee as a third-party review of the SBC Executive Committee’s handling of sexual abuse issues. The task force was appointed by SBC President Ed Litton in response to a motion passed by SBC messengers at last year’s annual meeting held in Nashville.

Guidepost released the findings of its report on May 22 with a list of recommendations to be considered by messengers to the 2022 annual meeting next week in Anaheim. The report has generated a myriad of opinions — both pro and con.

Davis, in a statement prepared for release to Tennessee Baptists, said he “shares the concerns of countless other Southern Baptists” regarding the Guidepost Solutions tweet.

“I firmly believe those who identify with the LGBTQ+ community have value and worth, especially to our Lord. However, that is a completely separate thought from hiring a firm to investigate the issue of sexual abuse. I do not believe the Southern Baptist Convention should be connected in any fiduciary way to any organization that is consulting with us on such an important topic yet does not share our biblical perspective of human sexuality.

“I believe the substance of the Sexual Abuse Task Force report does identify an extremely important issue that needs to be addressed and corrected. We should — and will —do all we can to eradicate sexual abuse from our convention and make our churches as safe as possible for everyone while caring well for sexual abuse survivors.

“However, Guidepost Solutions’ recently tweeted value statement on human sexuality is in sharp contrast to the Bible’s family and marriage values and our confessional statements summarized by the Baptist Faith and Message. Amos 3:3 asks, ‘Can two walk together unless they agree?’ Given the disparity of conviction on the issue of human sexuality, I don’t believe in this situation we can, or should, walk together. It undermines my confidence in any proposed future relationship between any SBC entity and Guidepost Solutions.

“As Christians, and as Tennessee Baptists, we clearly believe the truth of God’s Word; that God created people as male and female and that marriage is to be between a man and a woman,” he said. “While our world seems to be confused on these issues, God’s Word speaks clearly.”

Hallmark added that the recent tweet by Guidepost Solutions affirming their full support for the LBGTQ+ agenda “is troubling, especially in light of their recent report and investigation into issues of sexual abuse.”

“We cannot know the hearts of those who produced this report” he said, “but it is hard to imagine that their stance on these issues did not at least in part inform and influence the lens through which they conducted this investigation.”

Members of the Sexual Abuse Task Force took to Twitter to defend the decision to use Guidepost.

“The SBC Sexual Abuse Task Force contracted Guidepost to do the EC investigation because of their reputation as a world-class investigative firm. We did not choose them because of theological or political agreement. We do not agree with their recent tweet affirming Pride Month,” wrote Andrew Hébert.

Bruce Frank, chair of the SATF agreed. “Good word. Guidepost is a large, world-class , secular organization. We are grateful for their work but the recommendations being brought are from the SBC SATF.”

Earlier this year, the SBC’s EC approved up to $2 million to go to Guidepost Solutions from the EC’s reserve funds. This was in addition to another $2 million approved to cover legal fees paid to Bradley Arant Boult Cummings LLP, the EC’s new law firm – which supports the Nashville Pride festival, the LGBTQ Bar and is praised by the Human Rights Campaign, one of the nation’s largest LGBTQ organizations, according to The Pathway newspaper in Missouri.

Last week, the SBC Executive Committee adopted recommendations that would allocate about $14 million in additional funds to combat sexual abuse, according to the Pathway report. EC members were informed last week by Bill Townes, the EC’s interim chief financial officer, that $2.1 million has been spent since the task force and Guidepost Solutions began its work last year.