Three churches giving thanks to one Savior

COVINGTON — To a random visitor the Nov. 18 service at Zion Baptist would have seemed like any other special church gathering. There was music and singing, a message brought forward, and a lot of great food afterwards. 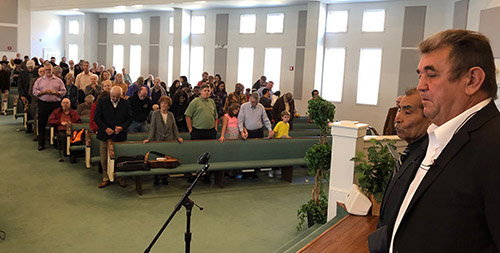 A difference would become apparent, though, with a song led in English but Spanish and Slavic voices mixing into the harmony. It would become more apparent when the first preacher behind the pulpit spoke in Slavic, the language indigenous to Eastern Europe and Russia. Ten minutes later a different pastor spoke in Spanish. A third, wrapping up the message, preached in English.

“Everyone walked away with a brand-new appreciation for the fact that even if we’re different culturally, we serve the same Lord,” expressed Lane Collins, senior pastor of Zion Baptist.

The idea for the 1st Annual International Day of Thanks began to be kicked around not long after Collins became pastor in October 2017. The Slavic-speaking congregation, Сионская христианская церковь (Zion Christian Church), has members from Belarus, Ukraine, Moldova, and Kyrgyzstan. La Iglesia Bautista La Verdadera Vid (The True Vine Baptist Church), has members from Honduras, Guatemala, Mexico, Cuba, El Salvador, and Puerto Rico.

A challenge to meet

“It was humbling to me,” Collins said, “to know that we can meet under one roof in a world that seems so disunified right now. We came together as one people and worshiped Jesus Christ. It was just incredible.” 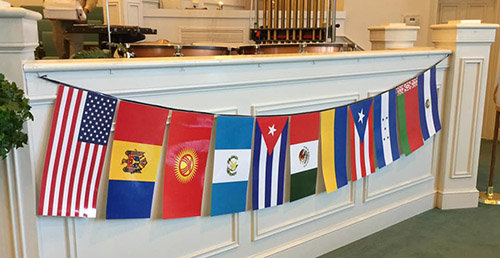 A stream of flags represents natives in attendance from those countries. DONNA BOWLES/Special

Each congregation claims a section of the Zion Baptist Church campus most Sunday mornings. While Zion Baptist meets in the main sanctuary, Zion Christian gathers in the chapel while True Life does so in the fellowship hall. All churches plan on International Day of Thanks to become an annual event.

“We as a staff started talking about this and realized we wanted to do this. We took it as a challenge to bring all the cultures together,” added Collins.

Zion Christian Church has been meeting alongside Zion Baptist for 15 years. It was only in February 2018 that True Life and Zion Baptist began talking about a similar partnership. True Life held its first services in its current on-campus location in October. 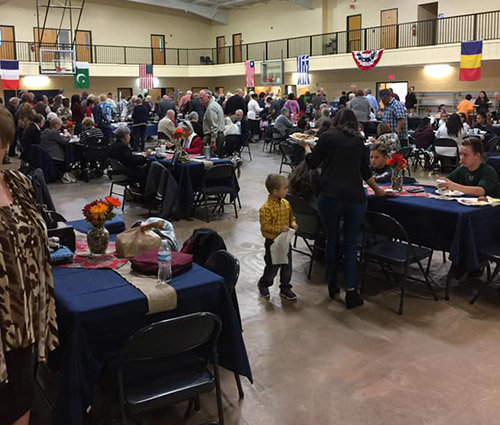 All three congregations gathered together afterwards for a meal including American, Hispanic, and Eastern European delicacies. DONNA BOWLES/Special

“I tried all the food I could possibly get on my plate,” admitted Collins.

The different-yet-same theme was probably best exemplified during worship. Zion Baptist worship leader Wayne Rickard led familiar songs such as “Give Thanks With a Grateful Heart” and “Amazing Grace.” Everyone sang in his or her own language. Each church provided a soloist. The Zion Ringers Handbell Choir performed their magic. 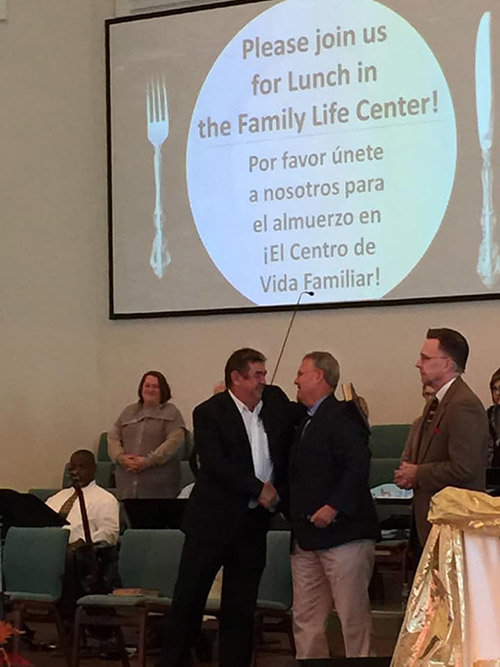 When Collins finished his portion of the three-part message, each pastor stood at the front during the invitation to receive any wanting to make a decision for Christ.

“We wanted to do this as a show of unity, but for it also to speak to the community,” Collins pointed out. “Word got around really quickly about it. People aren’t just looking forward to next November when we do this again, but to us working together all year round.

“I saw one person crying, saying she’d never experienced anything like this. Others told me the same thing. They thanked us for loving them, making them feel welcome, and helping them worship in their native language. When one pastor spoke, the other groups could see the translation on the screen behind him so we could all hear the message.”

The desire to be missional starts at home, Collins testified.

“I want to lead our church in a way that is multicultural, multiracial. We give to missions such as the Lottie Moon and Annie Armstrong offerings, but want a missional mindset every week.”

Zion Baptist recently established a mission team that just got back from a trip to Honduras in October. But, said the pastor, it’s important to keep a missional perspective no matter where you are.

“We have the world coming to us, living in our neighborhoods. I want our people to embrace the Great Commission and Acts 1:8. We’re going to continue to minister in our Jerusalem, Judea, Samaria and to the uttermost parts of the world. That’s the mandate Christ gave us. We need to be obedient to that calling.

“I’m excited about where our church is going.”